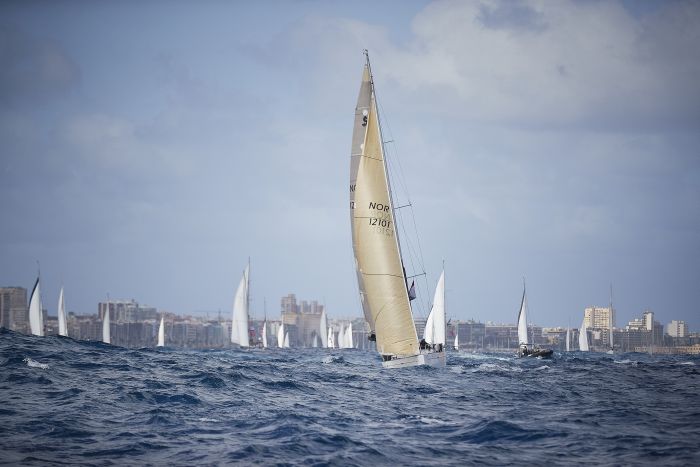 11/11/2019
It was a challenging start to leg one of ARC+ 2019 today from Las Palmas de Gran Canaria as a large north easterly swell gave the boats a rolling send off. In total 90 of the 95 strong fleet took the start for the 865nm passage to Mindelo in Cape Verde, with four boats opting to delay their starts until later in the week and one more delayed by mechanical problems.
In Las Palmas marina this morning the docks were busy with over 400 sailors eager to begin their adventure. “We are looking forward to sailing and this will be our big first ocean water sail.” said Rob Greenwell, skipper of Cuvee, a new Beneteau Oceanis 51.1. “Everyone is getting to the point where they just want to go. The people here in Las Palmas have just been so helpful and so friendly and the World Cruising Club support has been great.“
Lines were duly slipped around the marina as the ARC+ boats headed past the breakwater lined with spectators to wish them well and wave them off.
Over the last week in Gran Canaria, as crews have prepared their boats for the start of their Atlantic crossing, strong gusting winds from the NE have built up a large 2m swell; ideal for surfers, but causing some discomfort for boats on the start line today. The wind was more easterly than is typical for an ARC start, meaning it was a white sail reaching start in the 20+ knot winds.
Weather forecast for the next 24 hours shows winds in the mid-20's gusting 30+ in the acceleration zone to the south of Gran Canaria. The acceleration zone extends 100NM down from the Island, where its 2000m high mountain causes significant increases in wind strengths.
Due to the well-known dangers to boats in the zone when the winds are strong, ARC organisers World Cruising Club have set a virtual “mark” in the course to Cape Verde, to the south and east of Gran Canaria, which bends the course away from the acceleration zone and should keep boats away from the areas of strongest wind.
While ARC+ is a cruising rally, there is a start and finish line, and the boats are split into classes to enable some fun competition. First of the 15 catamarans and trimarans across the start line today was Neel 47 Minimole skippered by Italian sailor Aldo Fumagalli. Fifteen minutes later, they were followed by the Cruising Division, featuring boats from 30ft to almost 70ft, riding the ocean swell.
Many of the skippers opted to start with reduced sails – reefed mainsails for some, and just genoas for others. A sensible precaution as gusting winds are anticipated further south along the Gran Canaria coast. Leading the monohulls was Norwegian flagged Beneteau Oceanis 473 Orama, followed by Jenneau 51 Wild Spirit and French Pogo 36 Amarys.
It should be a fast passage, although the first 24 hours will be bumpy, and the swells are expected to remain with the boats until they are 36-48 hours south of Gran Canaria. Consistent NE winds expected on the course should make for a fast passage to Mindelo with the first boats expected in 5 days from now.
Meanwhile in Las Palmas Marina, the docks will not be quiet for long as over a thousand sailors on the ARC direct route from Las Palmas de Gran Canaria will begin their pre-departure programme from tomorrow. Whilst the ARC+ crews enjoy their sail, there's plenty more excitement to come in Gran Canaria.