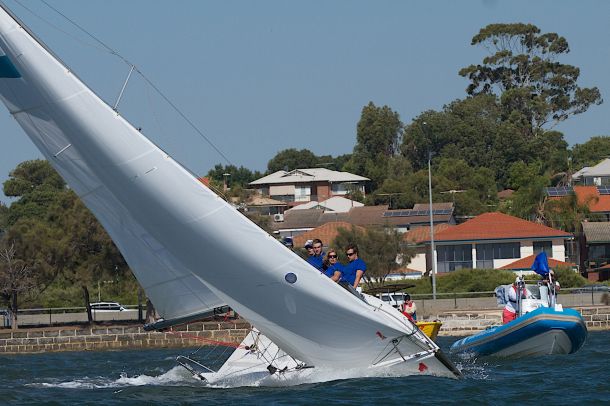 Déjà vu in Perth. In last year’s Schweppes Little Wheel Regatta Tristan Brown’s BW8 buried its nose in a stiff Fremantle Doctor and a spectacular broach sequence followed. This year it was Will Boulden’s turn. In a big breeze above 25 knots and gusting to above 30, the RO sent them off with reefed mains. Even before the start though, a spinnaker was destroyed when it wrapped around the forestay in a practice run.

Experienced hands like Sam Gilmour, Matt Jerwood and Lachy Gilmour handled the conditions with comfort and looked to be thoroughly enjoying the experience.  Newbies though, found the going pretty tough and it wasn’t long before the big gusts sweeping the course started to introduce errors.

The attached photo sequence is of Will Boulden and his crew. They were marginally in control after setting their kite, but lost it altogether three-quarters of the way down the leg, broaching wildly to starboard, spilling two of the crew into the water and allowing the kite to pass between the mast and the forestay, which locked off the halyard.

With the Kwinana Freway looming large in the background and looking increasingly like an unplanned parking spot, the yacht was surrounded by support craft.  Eventually a support boat crewed by Ken Booth (helper) and Graeme Monkhouse (driver) secured a tow line to the bow of the yacht and pulled it head to wind, thus not only preventing it from finishing on the beach, but also bringing things under some semblance of control.

For the record, Matt Jerwood heads the leaderboard by a point ahead of Sam Gilmour, Lachy Gilmour is third and Will Boulden, whose yacht featured in these images, is fourth.  The finals are today.

– From Bernie Kaaks, who also shot the images. 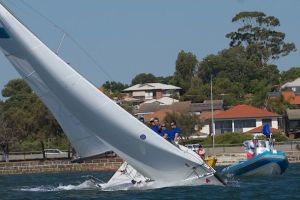 Will Boulden’s boat is hard pressed to windward before things started to unravel.

Closing in on the Kwinana Freeway.

Two plus three means all are accounted for. 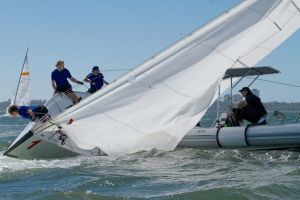 Going where angels fear to tread. 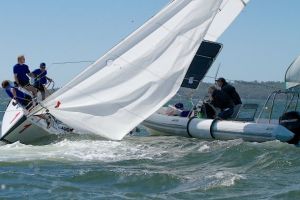 Where has the bimini gone?

The spinnaker, tattered and torn, but the rig remained intact.