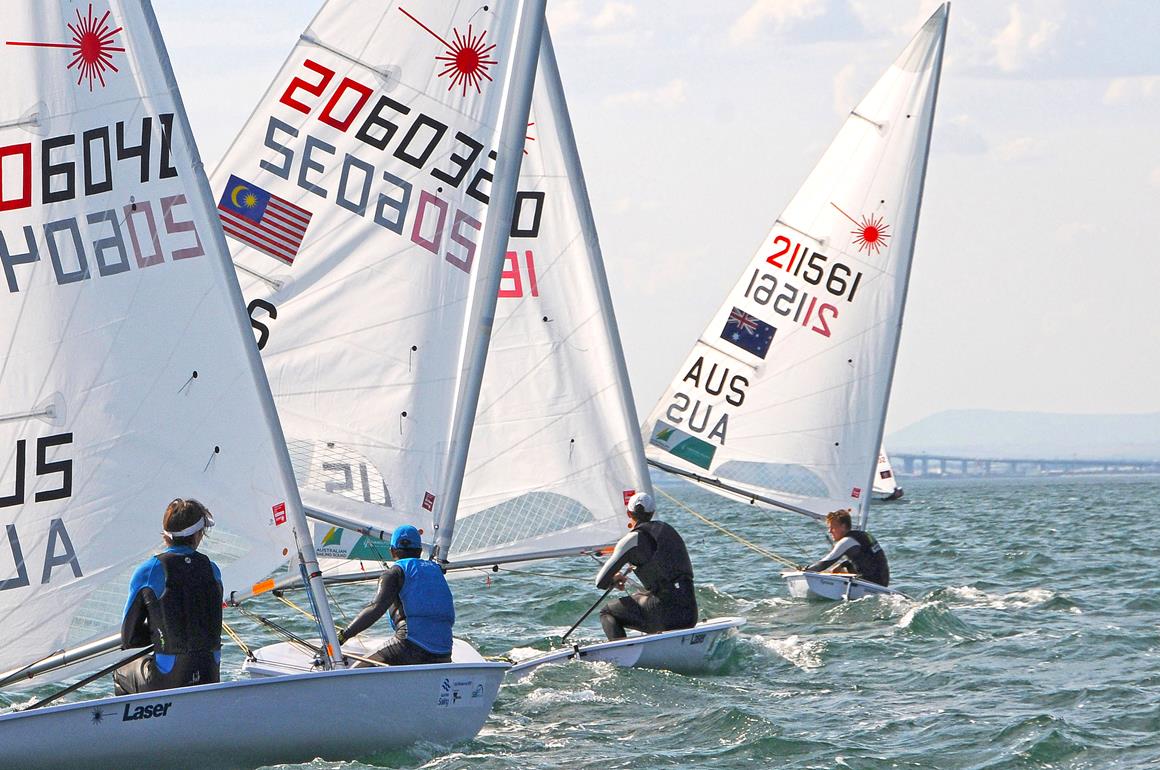 Racing has kicked-off at Sail Melbourne International 2017 with the Olympic classes heading out on Port Phillip on what was a scorcher of a day one. Around 35 degrees and a dying morning breeze made for a long wait onshore before the sea breeze filled back in and racing got underway.

Despite the wait, most of the Olympic classes managed to get two races in with the skiff sailors (49er and 49erFX) as well as the multi-hull sailors in the Nacra 17 completing three runs. Only the windsurfers had to do with one race after their racing was cut short in a dying breeze when they were the first ones to head out at midday.

“It was 35 degrees, which was a bit shock horror for Melbourne,” 470 Olympian Carrie Smith laughed describing the conditions. “We had a really good day. The breeze took a bit longer to come in so we were in the aircon for a few hours, which was nice. But once we got out there, they (race management) were good at starting the races really quickly and we ended up with a beautiful little tricky and flicky sea breeze.”

Sail Melbourne International is the inaugural leg of the new Asia-Pacific Circuit with a strong Asian representation competing in Melbourne.

“The temperature here is quite similar to Malaysia but less humid. We don’t like cold weather so this is good for us,” Malaysian Laser sailor Mohdmad Latif Nur Shazrin said after racing. Ranked fifth after two races, he was happy with his first day. “It was a good race today and we had a good sea breeze in the end. I managed to get a fourth and a seventh with the breeze picking up a bit. It’s really good to be back in Melbourne and I’m looking forward to more breeze tomorrow.”

A stellar-line up of Australia’s Olympic champions and medallists are racing at Sail Melbourne International (SMI) with the Australian Sailing Team competing in Melbourne in full force.

In one of the most anticipated fleets of the event, the Olympic Finn class, Australian Sailing Team’s Rio Olympian Jake Lilley is leading after day one and after winning the first race of the day, followed-up by a second place. 2012 Olympic champion in the Laser and new addition to the Finn class Tom Slingsby posted a fifth and first place to rank overall second. Swedish 2017 Finn World Champion Max Salminen is ranked third on equal points with Slingsby.

“Tommy and I are patriots, so we’re just looking for the Aussie win,” Lilley said of the three-way tussle at the head of the fleet. “Tom and I have been training together for the past couple of weeks and it’s been really good, really productive. It’s been working well and it’s a pleasure to work with him.

“He’s the finest sailor in the world at the moment and to have him in the Finn is a blessing. He’s doing a great job helping us out. I think we showed a bit of that today. We have such a good fleet here and it was only eight knots today, so everyone goes more or less the same speed. It means you just can’t afford to be on the wrong tack or make a wrong decision. You have to sail a pretty faultless race,” Lilley added

In the 470 two-person dinghy Olympic silver medallists Mat Belcher and Will Ryan started Sail Melbourne with a second and first place and sit on equal points with Daichi Takayam and Kimihiko Imamura from Japan, who won the first race of the day, followed by a second place. There are two men’s 470 crews from Japan sailing in Melbourne with both of them currently ranked in the World Sailing top ten.

“It was a very hot day, which made it tough, but we are happy with a first and second place and the sea state got bigger, which we like and we are looking forward to what’s to come” Daichi Takayam said about the forecast suggesting stronger winds.

The men’s and women’s 470 are racing together in one fleet, a fact fourth placed Olympians Carrie Smith and Jaime Ryan quite enjoy.

“I love racing the boys. The boys push you really hard, physically and mentally. They are always on the ball, you turn around and they are always just there. It’s awesome to have Mat and Will here and it’s really good that we get to mix it up with the best in the world. It’s been really cool and I’m looking forward to the rest of the week.”

The Sail Melbourne Regatta is Australia’s premier Olympic and Invited Classes Regatta, held annually in the waters of Port Phillip and is a fixture on the international sailing calendar.

Some of the world’s best sailors are in Melbourne for this year’s Sail Melbourne International Regatta (29 November to 3 December 2017) with racing taking place out of Royal Brighton Yacht Club.

The event is open to spectators and can be followed best from the pier at Royal Brighton Yacht Club (RBYC). Alternatively, viewing is available from the clubhouse upstairs, which is open to all guests during the regatta.