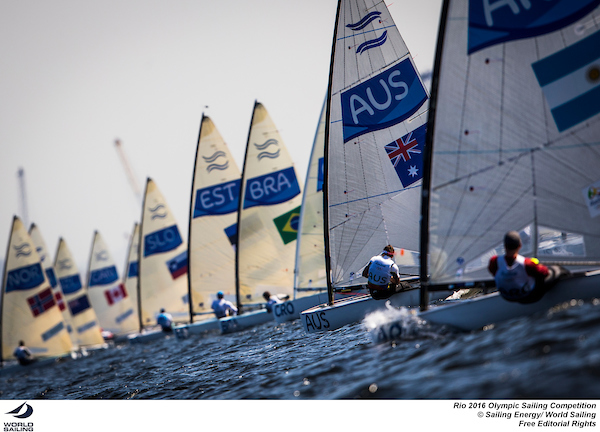 Jake Lilley gets away to a good start at Rio 2016. Photo Sailing Energy/World Sailing.

Sailing a Finn is a demanding occupation. Every one of the 23 Finn sailors who made it to Rio made huge sacrifices to be here and many will go home with unrealised goals and unfulfilled ambition. Some will be back, some won’t, but all will have a unique bond with a sporting event that played out as one of the tightest, closest, and most challenging Olympic regattas ever.

As the Rio 2016 Olympic Sailing Competition draws to a close we look at some of the Finn sailors who perhaps didn’t quite achieve their goals, but reflect on the week past with pride and a feeling of supreme accomplishment.

The line-up of Finn superstars included two of the medalists from the London 2012 Games and surprisingly neither even made it as far as the medal race.

Jonathan Lobert (FRA), who took bronze in London, was philosophical about the week. “The racing has been good, we’ve been able to do all the races, but they have been very tricky. For me I am of course very disappointed. I think I had the speed, I was training very hard, I had the fitness, even winning one race and I think could have done much better but sometimes in sailing it’s not always going the right way and I have to accept that and move forward.”

“I am not depressed just disappointed and I think it’s time for me to look forward and find a new challenge.”

He says it was a very different challenge and competition to four years ago. “I think compared to London this week has been very, very tight. The fleet was always very compact in almost all races and it has been very hard to come back when you made a mistake. I think it has been a really good competition in terms of the level of sailing. Everyone was very well trained and strong it has been a very challenging week.”

He was not particularly surprised at the conditions. “I think it has been more or less always like this in Rio, nothing very surprising, you think you know the place and then something else is happening. When we have been training here with Max and Tapio we have always tried to stay open and look around at what could happen, but sometimes you need to be at the right place at the right time. There is no explanation and when you look at the results and the big scores, no one was always able to be in the right place all the time, except maybe Giles who was the most impressive sailor here this week. For the rest of the fleet it was always up and down.”

He thinks he will be back, but understandably needs a break. “I don’t think it will be the end of Finn sailing for me but for sure I need quite long break to digest all that has happened. And there is a lot of stuff happening now in sailing, foiling and stuff like that and I really want to try that and see what I can do and use my knowledge and experience in Finn sailing and Olympic sailing to join some team and try some different things. I know a lot about the Finn now and I think you never should close any doors, so we’ll see how it goes and maybe come back for Tokyo.”

Even home favourite, Jorge Zarif (BRA), commented earlier in the week that he was frequently caught out by the conditions.  However he bettered his 2012 result by 16 places to end up fourth overall, the joint highest place that a Brazilian has ever finished in the Finn, after Claudio Bierkarck (BRA) placed fourth in 1976 and 1980. His coach Rafa Trujillo (ESP) predicted he could finish fourth or fifth and proved coaches are sometimes right.

He also felt encouraged by the support from the home crowd. “It’s nice. We are not practising in a sports arena so we are not used to having people behind you. Here I feel a little bit more of that. A lot of people talk to me after the race and it’s great. It’s great to feel the energy of the people.”

Zarif is expected to continue in the Finn, while also trying to complete his college studies. Like his father before him, he has now sailed in two Olympics, but still as one of the youngest Finn sailors on the circuit he surely has a bright career ahead of him still.

For fifth placed Ivan Kljakovic Gaspic (CRO), he repeats his result from London at his third Olympics. He is considering his options about whether to carry on to Toyko.

Deniss Karpak (EST) fell a long way short of his goals. “It was a super hard and tricky week, and I was unexpectedly unlucky.” He fell ill just before the Games with some breathing problems and a heavy cough and remaining weak throughout the event. “Weakness and too strong winds for me didn’t helped to achieve my goals. All my goals were left unachieved.”

“But I hope to fulfil my expectations next time in Tokyo 2020.”

While first and second were occupied by the same sailors since the second day, Giles Scott (GBR) and Vasilij Zbogar (SLO), third place became a moving target with first Zsombor Berecz, (HUN), then Jake Lilley (AUS) and then Gaspic. It seems none of them could find the consistency to stay there until the end.

Lilley who finally ended up eighth, after a quirk of scoring first dropped him out of the medal race, only to be reinstated later after his final race score improved following a protest of another boat.

The tall Australian had lost weight for the Olympics, expecting it to be mainly light conditions, so on the lay day before he medal race he tried to prepare as only a Finn sailor would. “I had two steaks. A two steak day is a good day for a Finn sailor.”

To add to the occasion of the medal race, his father arrived just in time. “My father flew in and that was bit of a surprise. It was pretty funny because he was in Argentina and he sent me a text and said “I’m in Argentina,”and I responded with “I’m not in the medal race,” and so that was a bit of a heartbreaker. So he got back on the plane to Rio and then he must have had a tough few hours up in the air and when he landed he got another text from me saying “I am back in”. That was pretty emotional.”

He paid credit to Scott, “All credit to Giles. He’s had a fantastic week and he’s truly one of the greats. But it was great that the rest of the medals were open to the end.”

For the future, “I am pretty hungry after this week so I’ll keep going and am looking forward to getting into the next quad and working towards the next Games. It just builds the hunger on the motivation after this week.” His immediate plans, “Put some weight back on and some gym work, as well as some more two steak days, so it’s going to be a good few months.”

“It’s been a fantastic Olympics but I can’t wait to go home.”

Josh Junior (NZL) ended on a high note, after a difficult start to the regatta that left him with , perhaps, too much work to do. On the medal race he said, “I sailed a really great race. Gave myself heaps of opportunities to make a few places, so really happy with that. It was an amazing experience, being around here and coming down to the water front and everyone cheering you on, shouting out and the New Zealand fags flying.”

“Apart from the first two days of the regatta I have sailed a really good event and, you know, I am happy with that.”

On the future, “I don’t know what I am going to do next. I am not going to sell the Finn, so I will definitely keep it.” For Toyko, “We’ll see how things go but I’d love to be there as well.”

The other sailors in the top 10 had their chances and let them slip away. Max Salminen (SWE) had the same chances as Paine to take the bronze, but went the opposite side of the first beat and that was that. Pieter-Jan Postma (NED) compounded a DSQ the previous day with a starting line error in the medal race that left him having to restart and trail the fleet. By the final race, his only route to a medal was to win the race, and as in London, he perhaps risked too much, especially on the starts, to make it happen. Before the final day he had risen to fourth overall, but those two races on Sunday, cost him dearly and once again he leaves empty handed.

And then there is young Facundo Olezza (ARG), the youngest, the lightest and the most inexperienced sailor in the fleet. To make the medal race was a huge achievement in itself, but to win two races along the way shows an unbridled talent that will surely rear its head again in the not too distant future.

The Rio 2016 Olympic Sailing Competition for the Finn class has been an absorbing battle or wits, skill, strength and mental stamina. The three worthy medalists highlight the diversity of sailors and the skill sets required to conquer the Finn as well as Rio’s challenging conditions. Caleb Paine (USA), brimming with young ambition, hard work and a sense of optimism; Vasilij Zbogar (SLO), the veteran of five Olympics, with huge experience and skill, and still not quite believing he has achieved his dream ending; and Giles Scott (GBR) the undisputed king of Finn sailing in this quadrennial.

Long live the Finn – there is nothing quite like it.