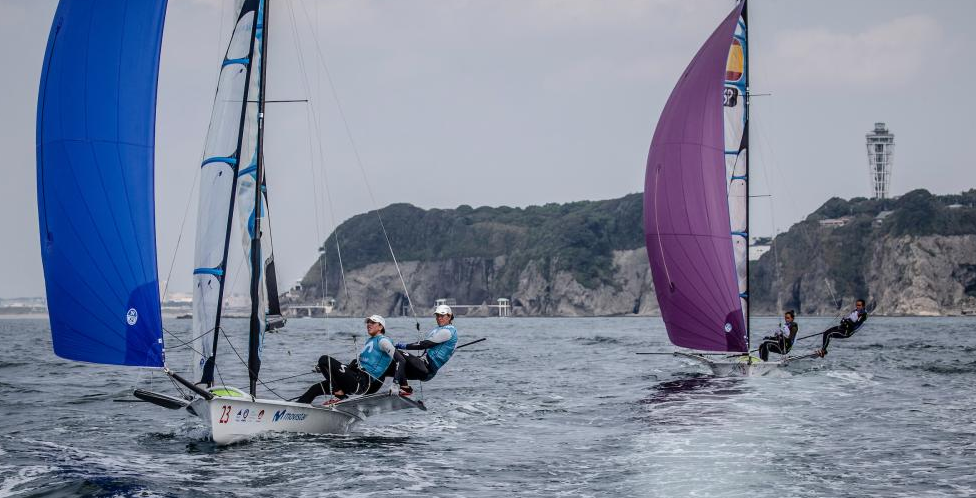 The 2020 Hempel World Cup Series is set for the lift off with 496 sailors from 46 nations ready to race across ten Olympic fleets on Sagami Bay in Enoshima, Japan.

Hempel World Cup Series Enoshima follows on from Ready Steady Tokyo, the Olympic test event, and is expected to be a harder event to win based on larger, competitive fleets with more than one sailor per nation on the startline.

Just a small number of nations had more than one athlete in each fleet at Ready Steady Tokyo but now, at the Hempel World Cup regatta, the full squads have assembled, aiming to prove their worth for Tokyo 2020 Olympic selection.

Racing is scheduled to take place on the same racing areas as the Tokyo 2020 Olympic Games and the event will be a real indicator as to who will be in contention for medals in just under one year’s time.

As well as a fight for Hempel World Cup Series Enoshima glory, the regatta also acts as the Asian Olympic qualification event in the Finn class. China’s He Chen, Hong Kong’s James Dagge and Iran’s Ahmad Ahmadi are the three sailors fighting for the single spot and will do battle in a 25-boat fleet.

Strength in depth is present throughout the fleet so it’s unlikely the trio will be in the hunt for medals but they will no doubt be keeping a close eye on each other in their bid to qualify their country for Tokyo 2020.

Hempel World Cup Series Enoshima is the Men’s and Women’s 470 their third consecutive event in Enoshima. They concluded their World Championships earlier this month and moved straight into Ready Steady Tokyo.

In the Men’s fleet, 2019 World Champions and Ready Steady Tokyo winners Mat Belcher and Will Ryan (AUS) are aiming for a hat trick of victories. Jordi Xammar and Nicholas Rodriguez (ESP) and Anton Dahlberg and Fredrik Bergström (SWE) joined the Australians on the podium at both events and will want to overthrow them.

In total, 32-teams will take to the startline and this is bolstered by eight Japanese teams who are fighting to go to the Olympic Games.

The Laser fleet will be the largest in Enoshima with 51 entries. Jesper Stalheim (SWE), Tom Burton (AUS) and Hermann Tomasgaard (NOR) demonstrated at Ready Steady Tokyo that they have the skillset to succeed on Sagami Bay. They will race on Olympic waters again but will be joined by a large Laser squad from Australia, Great Britain, Japan and New Zealand.

Italy’s Ruggero Tita and Caterina Marianna Banti have been the ones to beat in the Nacra 17 and that was confirmed when they won gold at Ready Steady Tokyo last week. However, just one year ago at the World Cup, they fell one point short, losing out to Jason Waterhouse and Lisa Darmanin (AUS). Both teams will race from Tuesday onwards.

They will be joined by strong compatriots. Tita and Banti have been locked in a qualification battle with Vittorio Bissaro and Maelle Frascari over recent months. Both teams have consistently hit the podium and their national selection could go down to the wire. Meanwhile, Australia’s Nathan and Haylee Outteridge as well as Paul Darmanin, brother of Lisa and cousin of Jason, and Lucy Copeland will go up against Waterhouse and Darmanin.

The 49er and 49erFX fleets will feature 37 and 36 boats respectively.

The 49er top three from 2018 all return. James Peters and Fynn Sterritt (GBR) clinched gold ahead of Logan Dunning Beck and Oscar Gunn (NZL) and Lukasz Przybytek and Pawel Kolodzinski (POL) last year and all will be looking for a repeat performance.

In the 49erFX, the 2018 podium also return. Gold medallists Martine Grael and Kahena Kunze (BRA) took the Ready Steady Tokyo title and will want to claim another. Alex Maloney and Molly Meech (NZL) and Sweden’s Klara Wester and Rebecca Netzler completed the podium in 2018 and make a return.

Mengfan Gao (CHN) will be the one to beat in the Men’s RS:X after he won gold at the recent Ready Steady Tokyo. World Cup medallists from 2018, Mateo Sanz Lanz (SUI) and Pierre Le Coq (FRA), make a return.