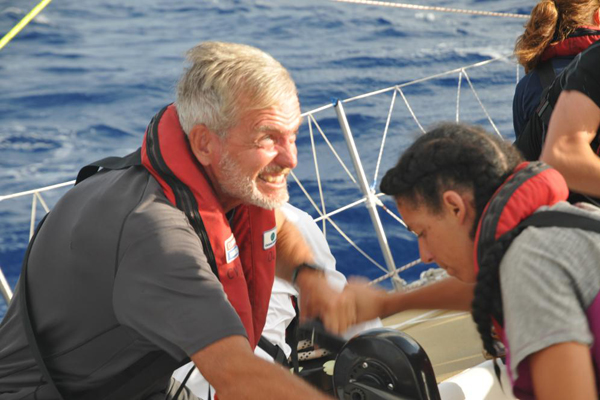 The past 24 hours played out like a game of snakes and ladders for the Clipper Race fleet as tactics and a healthy roll of good or bad fortune through the Windward Passage resulted in a contrast of joy and heartbreak for teams.

After navigating its way through the passage’s various wind holes and the start of the Bahamas and Turks and Caicos Islands to its north, ClipperTelemed+ climbed the most ladders and leads the race, with Visit Seattle making a surprise emergence from sneaky Stealth Mode in second place, just 3.2NMs behind.

Lead Skipper Matt Mitchell explains: “It's been a good and busy day on ClipperTelemed+, as we seem to have finally made it out of the other side of the light wind lottery.

“This morning saw us sailing very close to a number of the other boats and we all took slightly different initial courses towards the Bahamas. A few of the other boats sailed a slightly deeper course than us and for the time being, it looks like our tactic has paid off.”

Now back under the effect of the Trade Winds, the leaders have opened up a 60 nautical mile gap on third place Derry~LondonDerry~Doire, followed closely by Da Nang – Viet Nam in fourth, fifth placed GREAT Britain, Qingdao in sixth, Unicef in seventh, eighth-placed PSP Logistics, andLMAX Exchange in ninth. Under 10 NMs currently separate the seven teams.

GREAT Britain Skipper Pete Thornton, whose team led the race yesterday, details the thwarting, snake like effect of wind holes on team morale as he reports: “18 hours ago, we were making good progress. Since then however, it is as if there has been a large circle of zero to very light wind sat right over the top of us.

“Now, with other boats having sailed past us through the day and continuing to do so tonight, it is getting a bit frustrating now. Even when we start to promisingly get some sail action and think we're escaping, it seems to simply spot that we're moving and swiftly catch up and plonk itself on us again. So, all we can do right now is simply hope and look, hope and look.”

Dan Smith, Skipper of Derry~LondonDerry~Doire explains how the leaderboard changes occurred as he reports: “LMAX Exchange, GREAT Britain, Da Nang – Viet Nam, ClipperTelemed+ and ourselves were together racing northerly with some Islands and reefs as obstructions.

“ClipperTelemed+ went east early while the other boats remained in the west. We wish we had followed ClipperTelemed+ who made big gains and joined Visit Seattle up in front. Instead we spent the day chasing GREAT Britain and sailing through their galley waste until finally just managing to squeeze in front.

“Boats behind have made great progress being less affected by the wind hole and have come up to join us. Tonight promises to have some tighter racing where loosing concentration could put us at the back and a wise move can keep us within striking distance of the leaders. We'll need to keep concentration levels up.”

Mission Performance chases 10NMs behind the main pack in tenth whileIchorCoal and Garmin’s positions remain hidden as they operate under the dark magic of Stealth Mode.

As the teams attempt to take back miles on ClipperTelemed+ and Visit Seattle the next big tactical decision will be the age old challenge of whether to be lured by the Scoring Gate bonus points, or head straight to New York and preserve potential podium places and overall race standings.