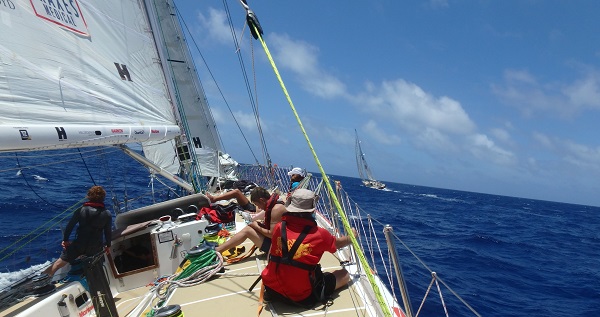 On board Qingdao during the Clipper race to New York. Photo Clipper Ventures.

The last 24 hours has seen a trimming battle and lots of sail evolutions across the fleet as the teams fight to clear the Windward Passage in extremely light winds.

On Day 3 of the LMAX Exchange – RACE of THE AMERICAS, GREAT Britain is now leading the fleet*, just 0.46 of a nautical mile ahead of second placed Derry~Londondery~Doire. Da Nang – Viet Nam is now in third position. However, just 12 NMs separate the first boat from the eleventh in the Caribbean Sea. Visit Seattle is in Stealth Mode until 0000UTC (midnight) tonight.

After the wind shifted and died off yesterday and a stronger current developed in the passage caused by nearby land masses, the teams have been on edge trying to keep their boats moving in the variable conditions.

Rich Gould, Skipper of IchorCoal, currently in tenth place, reflected: “Today has been a day of evolutions, and certainly been the busiest day of this race to date.  With the wind building and falling during the morning we first saw reefs going in and out.  There has been a couple of headsail changes and, for a fleeting moment, even a kite in the sky.

“We, along with the rest of the fleet, are currently fighting our way north through the Windward Passage. A place doesn’t earn a name like that without good reason, but ironically we have very little wind from any direction at this moment in time.

Once clear of the Windward Passage we move in to the second part of this race, and possibly the most tactical.  So far there have been no navigational choices to make as both Jamaica and Cuba had to be left to port as there are marks of the course to the east of both, but our next mark of the course is about 850 miles north. This leaves us with several options of how to navigate our way out of the Caribbean and in to the third section of this race, the North Atlantic,” Rich added.

Matt Mitchell, Skipper of sixth-placed ClipperTelemed+, said his team was firmly caught in the light wind lottery now, although it had been fairly lucky on the whole.

In his blog today, he describes a number of headsail changes that took place yesterday to deal with the varying wind, with the team flying the windseeker, Yankee 1, Yankee 2, the lightweight spinnaker and the medium-weight spinnaker at least once each.

“Today started well and we were counting our blessings that although we were tight on the breeze, we actually had breeze to play with. This saw us being on the easterly tack for the majority of the day in anticipation of a wind shift that never looked like it was going to come.

“All in all a very busy few hours [of sail evolutions] but the hard work seems to have paid off as we have reeled a number of boats in. The wind is continuing to be more than a little capricious and I envisage many more headsail combinations left to try out before the night is through,” Matt added.

Stay tuned to the Race Viewer to follow the latest updates.