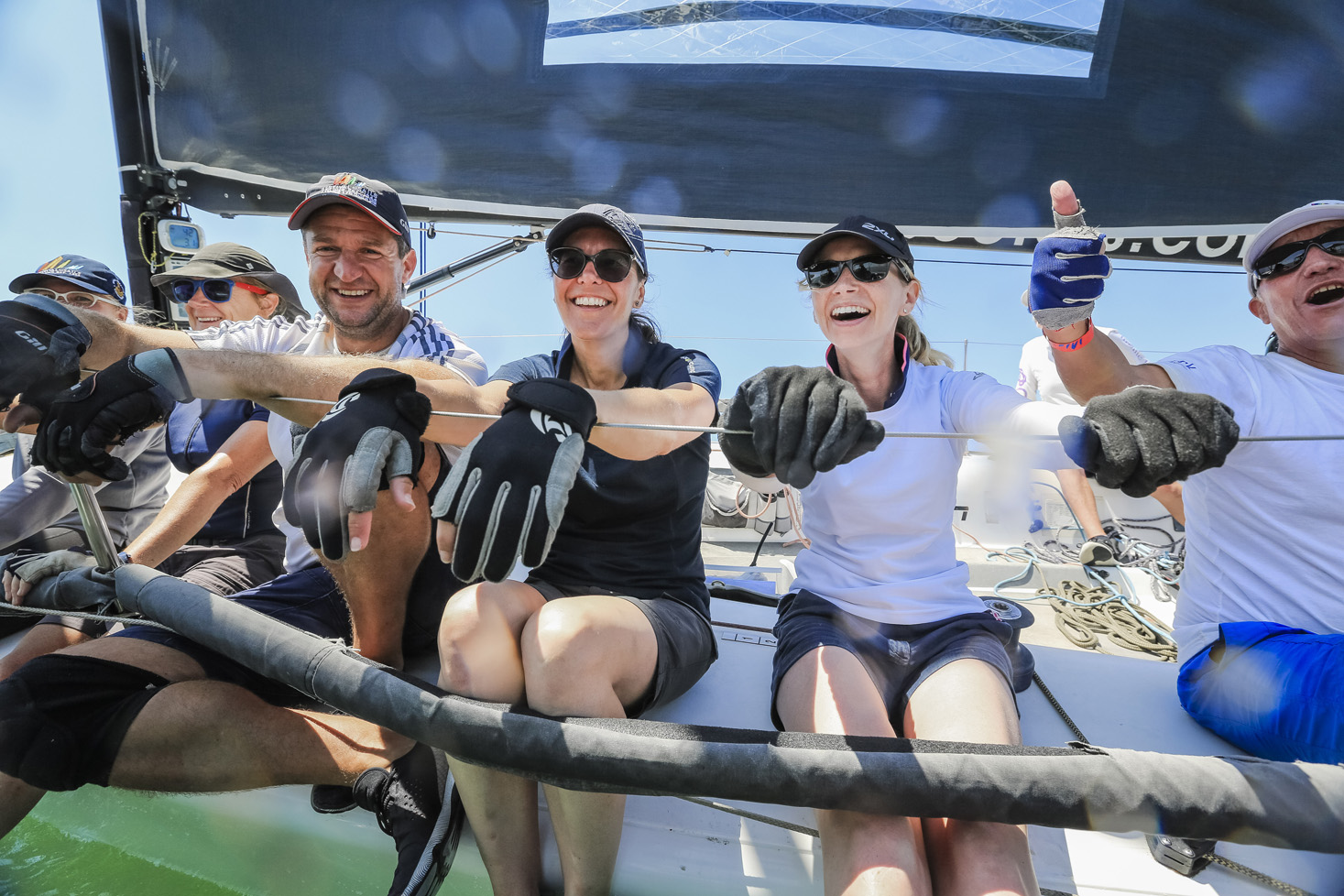 Geelong’s Corio Bay showcased plenty of summer sizzle in terms of daytime temperature but less in the sense of breeze until a cooling sou’easter finally crossed onto the track on day two of the three-day 175th anniversary Festival of Sails.

Light easterlies failed to swing around to the south-east and ignite to a typical afternoon sea breeze until later afternoon, meaning competitors spent the day easing their way around various scenic passage courses and short courses in 6 -7 knots.

Rating Series division 1 and 2 spent their afternoon floating about their outer harbour course under a hot sun, only managing one race at 1315hrs before a second hiatus. Eventually race officer Greg Sinclair moved the fleet inshore to try for a second set of results, which they achieved at 1730hrs in the best breeze of the day, 12-15 knots.

At least the 3,000 festival sailors were on the water and could dip their toes in to cool off while the sell-out Cadel Evans Great Ocean Road Race riders faced very challenging conditions, and worse is on the way. A scorching 39 degrees is predicted for the region on Sunday January 28, the final day of both major events.

Full results in all divisions at: www.topyacht.net.au/results/2018/fos/index.htm

Morris Finance Sydney 38 OD Australian Championship
The Sydney 38 fleet’s tricky day on their inner Corio Bay course and late start to the first race of the day resulted from a course area relocation then a postponement while waiting for the Cruising Non-Spinnaker and Classic Boat divisions to cross the one design’s starting area. Race 6 had to be rerun after the first attempt was thrown out when the sea breeze finally arrived, skewing the course set-up.

The International Etchells shared a course with the 38s. Guyon Wilson’s Voodoo Spirit leads the series by two points from Blake Robertson’s Bananas In Pyjamas.

Bringing the average age of the Etchells fleet down is a RGYC crew of 16-year-olds now too big for Cadets and looking for something faster. The four-man crew was loaned Urban Gorilla by club member Michael Shanahan and skipper Dominic Randall and Co. and his mates are learning the ropes as fast as they can.

Super 11 & J111 division
A fleet of J111s are racing under their own pointscore as well as a Super 11 box rule handicap and Rod Warren’s Joust from Sandringham Yacht Club is leading the former and runner-up to Damian Thomas’ PP1 in the latter.

Sports Boats
The sports boat fleet might be small but they’ve had their fair share of misadventure.

Chris Bland worked hard into the evening rebuilding the front end of his Shaw 650 called Star after making a big start error on day one and hooking another sports boat, Anger Management. “I broke my bow pole 600mm in from the end and smashed the launch-out mechanism. I worked at my factory last night and all is as it was, except my pole is now 150mm shorter,” Bland said.

Pointscore leader Andrew York and Reo Speedwagon, a Reo 7.2 design, had a late panic coming into the series when they realised a vital piece of mast equipment was left in Sydney. Luckily York spotted a sailing mate heading north on the freeway at Tarcutta and was able to track him down via Facebook to request he pick up the component on his way back to Geelong.

The Port Phillip forecast for the final day of competition is variable winds 10 knots becoming northerly 15 to 25 knots in the morning then becoming north to north-easterly 10-15 knots during the afternoon.

Cruising boats will set off on another scenic course from 1100hours and windward/leewards will commence at 1230hrs.

The Festival of Sails’ busy on-water schedule is complemented by a waterfront summer festival for all ages, sponsored by Geelong Connected Communities.