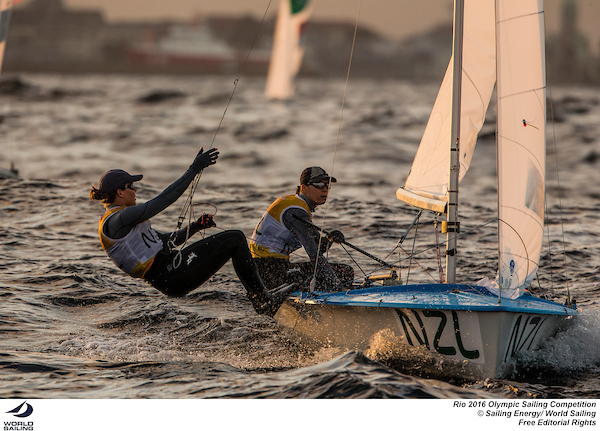 Polly Powrie on the wire and Jo Aleh on the helm of the New Zealand 470. Photo Sailing Energy/World Sailing.

Defencing champions Jo Aleh and Polly Powrie of New Zealand are ruing being a few millimetres over the line in the first race of the womens' 470 at the Rio Olympics today. The UFD they scored, to go with a previous disqualification, puts them in seventh place, 20 points behind the London Silver medallists Hannah Mills and Saskia Clark of Great Britain.

Technically there are three races still to be sailed in the preliminary series but realistically, tomorrow's forecast of more light and shifty conditions means the race they lost two days ago will probably not be made up.

While obviously disappointed at the decision, the Kiwis were determinded to keep sailing well and hope the results would take care of themselves.

They said they thought they had started behind the line and weren't told of the UFD until after the race, when they were first across the line. “We'll look at the footage but there's not much you can do in a situation like this,” Aleh said. “The race committee has the final say.

“We're happy that we sailed a good day and it's just a pity that the results don't show it.”

Two or three good races tomorrow will put them back in the mix for the medals, but another high score will finish their campaign.

Australians Carrie Smith and Jaime Ryan had a sixth and a thirteenth today to be in 11th place, four points out of the top ten.

Ryan said that there is a lot of racing left to go so they are not looking too closely at the points.