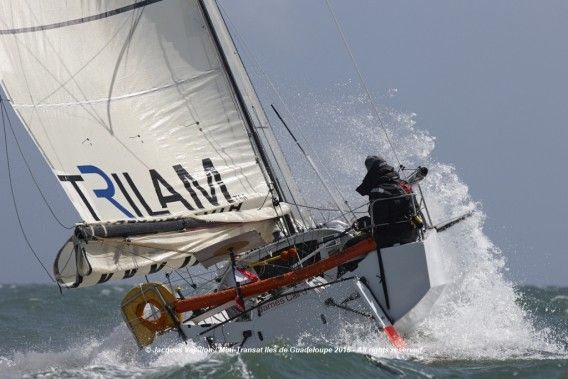 With a strong following wind, the Minis bowled along the portuguese coast, with the same worry in each person’s mind: the best way to attack, whilst also keeping the boat under control. In this constant game, it’s experience that makes the difference.

It's not by chance that, with a few exceptions, the old hands of the Mini circuit are in the leading places in this first stage of the Mini Transat îles de Guadeloupe. At the moment, the big guys are justifying their reputations and they are all in contention to vie for the best positions.

Davy Beaudart (Flexirub), who has been the race favourite, is keeping hold of his place with gusto, and fighting off the attacks by the furious trio of Axel Tréhin (Aleph Racing), Frédéric Denis (Nautipark) and Ludovic Méchin (Microvitae).  Amongst these three, some sort of gentleman’s agreement has come about: instead of each of them fighting all the time, they are taking it in turns to rest and attack. This isn’t just an altruistic thing, as it also lets them use their boats to full potential, whilst decreasing the risk of  breakages.

The possibility of breakages is of course always  with them, and there have already been two demastings (Gilles Avril et Andrea Pendibene)  and several  other competitors, such as Carlos Lizancos  have thrown in the sponge, or made a stop for repairs.  The rules of the course are clear about this: each stoppage should last less than 12 hours, and the cumulative time for stoppages is 72 hours in total. For some, the countdown has already started, like for Maxime Eveillard (Héli Stratégy) who almost certainly will need to demast to repair her damaged masthead.

At the heart of the chasing group, the men in the west, such as Patrick Girod (Nescens) and Olivier Taillard (Alternative Sailing) are coming back into contact. There are at least a dozen people fighting for 5th place in the series class in this first stage. It’s safe to say the battle is going to get even more intense. There are at least four days more of this rythm before  it’s all over.