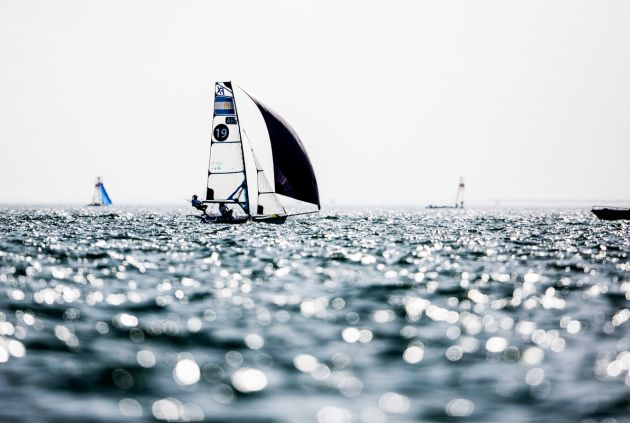 Sailors opening their curtains in Miami this morning would have been welcomed by a pleasant breeze that was enough to put a grin on their faces.

Upon arriving at the venues of Sailing World Cup Miami presented by Sunbrella their grins were to turn into a smile as a 14 knot south eastern breeze whipped its way around Biscayne Bay.

Predicted to hold throughout the day, the breeze was unable to sustain its tempo, dropping early afternoon and in the words of Australia's Jason Waterhouse it was a day to 'have your head on a screw.'

In the end, only the 49er, Laser and Paralympic fleets completed their full schedule of racing for the day with the remainder either completing three, two, one or in the RS:X Women and Finn fleets case, no races.

Jason Waterhouse and Lisa Darmanin (AUS) arrived back at Regatta Park, a new venue for Sailing World Cup Miami presented by Sunbrella, late in the day with a consistent day of racing under their belts in tricky conditions.

A 3-4-3 in stable conditions is a day to be proud of, but in the Miami shifts, that's impressive. The trick? “Have your head on a screw,” exclaimed Waterhouse. “Just keep looking around and making good tactical decisions. The first race was a boat speed race and the next two were tactical chess playing races.

“It was a lot of fun out there and I'm sure there were a lot of ups and downs and we are happy to come away on the right side of it. We had a really good day and were really consistent, it was tricky and typical of Miami. We can take it forward for the rest of the regatta.”

The Australians are two leading lights in the Nacra 17 fleet, modest in their approach, humble in their ways yet full on and intense in the racing arena. They won gold at the Aquece Rio – International Sailing Regatta 2015 and are backing that performance up with further results to match.

After five Nacra 17 races they lead the way on 13 points, Mandy Mulder and Coen de Koning (NED) follow on 20 and Santiago Lange and Cecilia Carranza Saroli (ARG) sit third on 26.

'Keeping it consistent' is a term every racing sailor aspires to and that term could not be more appropriate in the Olympic sailing arena. Sailors don't necessarily have to win a race to claim a medal. Regular results at the front of the pack can go a long way to ensure you're there at the end when it counts.

Argentina's Victoria Travascio and Maria Sol Branz are well known for their light breeze consistency and they personified that once again by picking up a 2-1-2.

“We did very good and it was really cool,” explained Travisco. “We managed three good starts and that was it really. The first we went on the left, had a good start and stayed on the left.”

The Argentineans demonstrated their light wind nous in the middle of 2015, winning Pan American Games gold on Lake Ontario in Toronto, Canada. Miami's conditions on Tuesday suited them and they have leapt up the leader board, tied for third with Brazil's Martine Grael and Kahena Kunze (BRA).

Ragna and Maia Agerup (NOR) hold their overnight lead with Alex Maloney and Molly Meech (NZL) in second.

The new Australian pairing of Haylee Outteridge and Nina Curtis continues to impress, holding 11th position ahead of countrywomen Tess Lloyd and Caitlin Elks who are 18th, while Olivia Price and ElizaSolly have dropped back to 25th.

Defending Miami 49er champions Nico Delle-Karth and Nikolaus Resch (AUT) took over at the top of the pile after four races. They opened up with a 13th, which they discarded before swiftly following up with a fourth, second and a first. They occupy first overall on 12 points.

James Peters and Fynn Sterritt (GBR) are second on 19 and overnight leaders Jorge Lima and Jose Costa (POR) drop to third on 24 points.

Of the Australians, David Gilmour and Lewis Brake sit in 8th while Olympic champions Nathan Outteridge and Iain Jensen have moved up the leaderboard after a forgettable first day. A third and a fifth have lifted them to 12th overall.

Today, on the Women's 470 course at the Sailing World Cup Miami presented by Sunbrella, it was all about the pressure. From the wind, that is. As with yesterday, a promising breeze in the morning dwindled quickly. By noon it was decidedly in the single digits. By mid-afternoon it was on the edge of being unsailable. By that time, however, the women 470 sailors, were ashore, washing off their boats and thinking about what went right or what went wrong—or maybe a little of both—in their two races.

“When it's so light, the pressure [is most important],” said skipper Fernanda Oliveira (BRA), who, along with teammate Ana Luiza Barbachan, scored a first and a second today and are currently first, by 3 points over Lara Vadlau and Jolanta Ogar (AUT). “You have to be paying attention all the time. I think that we did well downwind, and rounding the marks we could gain some points. It's going well, lets see what happens in the next few days.

Oliveira also stressed staying sharp before races, especially when there are postponements and general recalls.

“I think that a routine is the best way to keep focus on our goal,” she said. “We are trying to just be checking, all the time, the wind and the current, the courses if they change something, paying attention all the time. If you relax and relax and relax, and try to start it again, it's complicated. The routine is the most important thing so you make all the times the same thing and then it's easier to be ready to go.”

With the class's world championship scheduled for next month in South America, the fleet at the Sailing World Cup Miami is smaller and not quite as deep as in past years. But Oliveira stressed that it's just as important to stay focused.

“We are trying to do our best; we are trying to train, to make this event like a training for the world championships,” said Oliveira. “But we have a lot of young teams here that are sailing very well, so we have to pay attention to them.”

Some top Women's 470 teams have skipped this event to rest for the world championships, but Oliveira said that with the pressure of a home Olympics looming on the horizon, she is happy to stay busy.

“The pressure will come for all sailors, and for all Brazilian sailors also,” said Oliveira. “We have to keep paying attention. It will not be easy, it's a special [Olympics]. I think we are OK; we already did a Games together so we have some experience as a team. In six months we're going to be ready to go. From now until April, we have a lot of events, so there's no time to be thinking on it.”

So the motto for the day: on the water, seek out the pressure; off the water, try to keep it at bay.

A black flag and an OCS has cruelled the chances of the Australian pair, Carrie Smith and Jaime Ryan. They sit second from bottom in 16th place.

It was also the experienced Men's 470 teams that rose to the top, with the top five teams in the overall standings after three races each featuring at least one former Olympian. At the head of the class is the home team, Stuart McNay and David Hughes, who won both races today by a combined 90 seconds. McNay is looking to head to his third Olympics this summer. Two points in arrears—each team has discarded its worst finish—are Onan Barreiros and Juan Curbelo Cabrera (ESP) with Matthias Schmid and Florian Reichstädter (AUT) in third.

Dutch sailor Rutger van Schaardenburg continued his solid start to the regatta with a first and sixth today. It was a slight step down from his 2-1 yesterday, but it was still the best score of the day, nipping Filip Jurišić (CRO) by virtue of a tiebreaker. Van Schaardenburg retains command of the overall lead, six points ahead of Jurišić. Behind the Croatian sailor, however, lies a tightly packed mob of top Laser talent; just 23 points separates second from 22nd. Included in that group is five-time Olympic medalist Robert Scheidt (BRA) in 13th and American medal hopeful Charlie Buckingham (USA) in 14th. Buckingham is in the first stage of the selection series for the U.S. Olympic Team. While US Sailing Team Sperry teammate Chris Barnard (USA) is not off to a good start, Erik Bowers (USA) is just two points behind Buckingham in the overall standings. The Lasers will hope for two races tomorrow and then, regardless of how many races have been completed, the fleet will be split into Gold and Silver Groups for the final two days of full-fleet racing.

Both Australians sit in the top 10, with Tom Burton moving up to eighth and Matthew Wearn dropping down from sixth to tenth.

A single Men's RS:X race was completed in the light air with the Women's RS:X unable to sail.

Liu has opened up a three-point gap over van Rijsselberge after two races but it's still very early days in the competition with everything to play for.

Three 2.4mR races have thrown out different victors in each. Bruce Millar (CAN) took the first bullet on the opening day and in Tuesday's two, Peter Eagar (CAN) and Helena Lucas (GBR) crossed the line first in races two and three.

As a result, the trio are separated by one point at the top of the leader board. Miller leads on three points followed by Eagar and Lucas on four.

Paul Tingley, Logan Campbell and Scott Lutes (CAN) grabbed the lead in the Sonar following a second and a discarded seventh. Race wins went to Aleksander Wang-Hansen, Jacob Haug and Per Eugen Kristiansen as well as Alphonsus Doerr, Brad Kendell and Hugh Freund who are eighth and fifth respectively.

Racing resumes on Wednesday 27 January at 10:00 local time. The Laser, Laser Radial and 49er will complete their qualification series and many of the fleets will be looking to catch up on races lost over two challenging days.