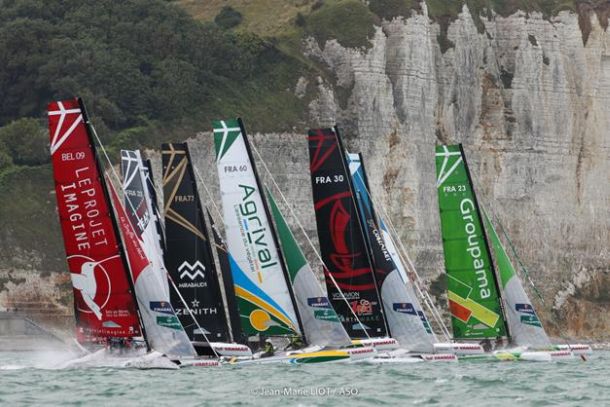 After sailing in light wind yesterday along the cliffs of Normandy, the 28 teams competed in Stadium Racing format in solid breeze. The south-westerly wind 10-15 knots this morning turned westerly throughout the day building up to 20 knots with gusts reaching 25. The racing was fast and furious, with short, sharp speed races that left all the teams exhausted.

Groupama’s experienced crew led by Pierre Pennec, multihull specialist whose sailing background includes a 2nd place at the helm of Gitana in the 2011 Extreme Sailing Series, won two of the five races today which takes him to lead the day of Stadium Racing in Fécamp et tops the Tour leaderboard. “It’s a great day for us. We won and we take the lead overall. That’s what Groupama came for. We’ve reached our first goal. Now the second one is to keep the lead until the end. It’s not going to be easy because the competition is tough,”  said helmsman Pierre Pennec.

Three other race favourites were on top today for the second and last day of racing in Fécamp. Grandeur Nature, winner of Dunkirk’s coastal race, lost their leadership but confirmed their ability to win races. “It’s very tight. A tiny mistake on the layline, on a gybe or in the positionning downwind cost a lot,” said Frédéric Duthil, skipper of Grandeur Nature Vérandas. “In the last race, we got stuck and crossed the finish line in 6th position. At times, positionning in more important than speed. This is part of the stadium racing techniques that we need to get. We have to anticipate the bottom mark roundings. But today was a good day because now we know we can do also well in this racing format.”

After their average performance in the Coastal race yesterday, Spindrift showed great skills today on the water with consistent results. “We are very happy with our second place today, which takes us to 3rd overall. We needed to react and perform well after a disappointing 14th place yesterday. Last night the team had a good debrief and everyone talked a lot. It’s good to see the strong bond in the crew,” said skipper Xavier Revil

The strong wind conditions on the race course led to a few crashes. No major damage, but a few discussions in the jury room. At the bottom mark in race 3, the rounding was tight and CombiWest crashed into West Courtage. “We were in the right », said skipper Frédéric Guilmin « as Vinci did not leave enough space for us to avoid West Courtage. So we got redressed, and we are still in the game overall. We are lucky to have a good shore crew to fix the damage tonight.”

The Tour new heads to Pornichet for Act 3. The teams have a day off to pack the boats and drive 500km down south. But it’s not going to be a day off for everyone. As winner of the day Pierre Pennec explains with a laugh : “I have to do a bit of training because as a helmsman, I don’t move much on the boat, but when Franck arrives in Roscoff, I will move to the mainsail and I have to be in good form because Franck loves it when it goes fast !”