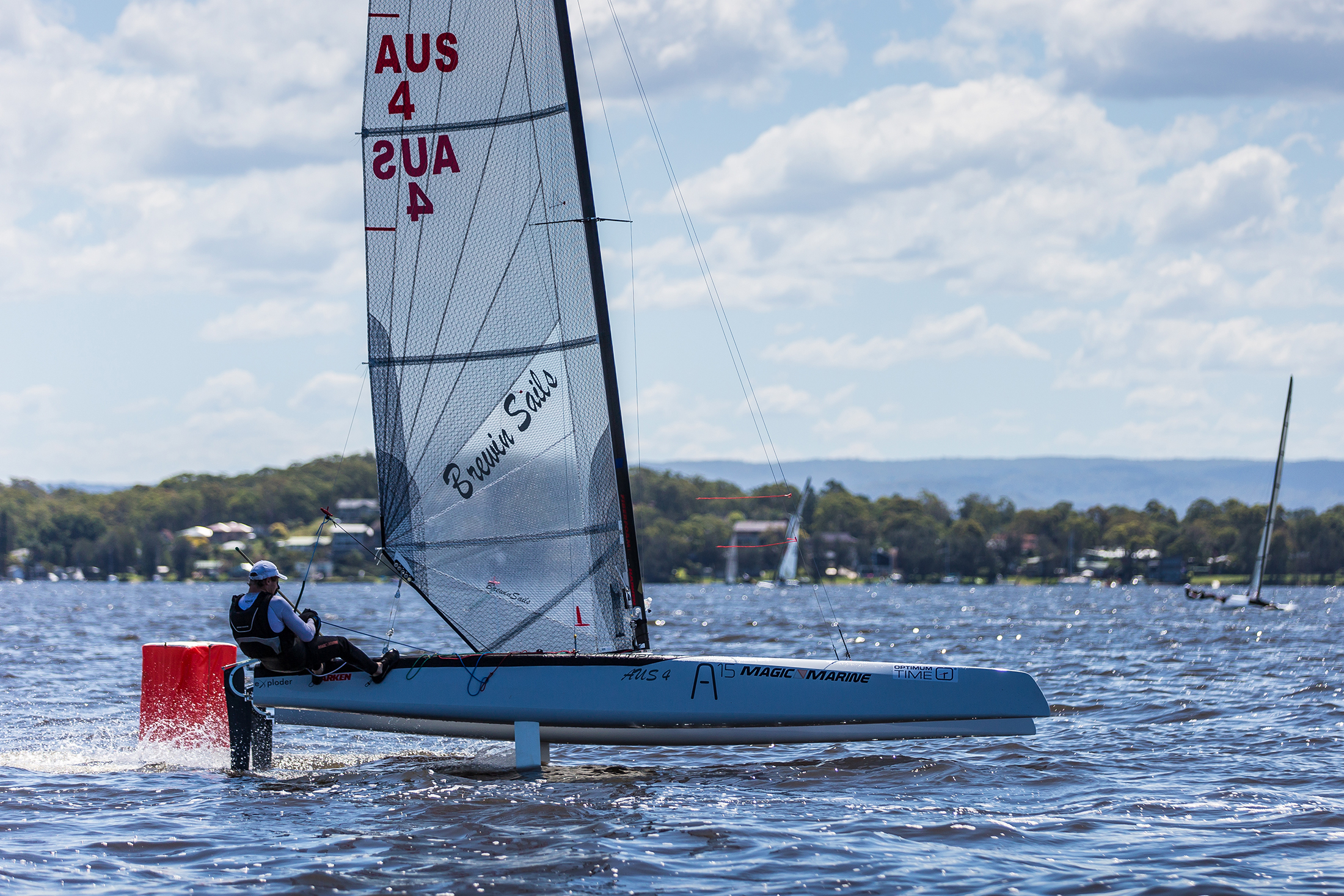 Steven has been at the top of the class for many years, and has previously won the World Championship in Aarhus, Denmark, in 2011.

For months, Steve has been working tirelessly to perfect his foiling technique, as well as testing the endless evolution of rudders and centreboard prototypes that have emanating from the Exploder manufacturer in Poland. As a sail maker, he has further developed the deck sweeper mainsail designs, and the sealed trampoline concepts that proved so dominant during the 2015 World Titles in Punta Ala

The final race of the series was sailed on Friday. The high winds that featured in the middle segment of the regatta were now exhausted, and we were left for hours drifting about waiting for the breeze.

Racing finally commenced at 2:00pm, in brilliant sunshine, and about 6 or 7 knots of easterly wind. Darren Bundock raced away.

The Frequent Flyer award for this regatta belonged not the to sailors, but to the Postponement Flag. The weather proved a disaster. An intense low-pressure system known as an “East Coast Low” developed off the NSW coast during the middle of the regatta, which totally destroyed the normal summer wind patterns.

There was no wind for the Practice Race on the Sunday. Racing on the Monday was delayed several hours, but eventually a reasonable, if still patchy, NNE breeze arrived to allow three races to be sailed, with acceptable foiling conditions.

The racing one Tuesday and Wednesday was blown away.

Racing on Thursday was held in a slowly strengthening southerly wind, which was characterized by severe gusts, and lead to many capsizes, retirement, one completely broken boat, and the need to recues a number of sailors whom became separated from their craft.

The final race of the series was sailed on Friday.  Brewin’s dominant performance in the earlier part of the regatta meant that he had already secured the Championship. The racing was still alive however for many other places.
The high winds that featured in the middle segment of the regatta were now exhausted, and racing was delayed for several hours whilst awaiting the breeze.

Racing finally commenced in brilliant sunshine, and about 6 or 7 knots of easterly wind.

Darren Bundock raced away from the remainder of the fleet on his foils on the first downwind leg as he skilfully exploited the gusts, and he went on to win by a large margin.

The battle was on for the second and third spots. Nathan Outteridge rounded the last windward mark just ahead of Steve Brewin, and the high speed-foiling race towards the finish was on Brewin prevailed over Outteridge to take the second position.

The top ten places were filled with the usual faces, reinforcing the maxim that the top sailors usually win. All sailed foiling boats. The top non foiling boat sailed by Dave McKenzie came in at 11th place overall, and the next few positions were filled by the best of the non-foiling sailors.

48 boats competed in the event.

Unfortunately, the twice America’s Cup winning skipper James Spithill was unable to sail, due to a flare up of an injury on the way out to the start of Race One.

Nathan Outteridge showed flashes of his brilliance including winning one race. Unfortunately he had little time on the boat before the regatta. He was a very late starter for the first race, and he suffered from a DNC and a DNF in the strong winds of the Thursday racing.

Both Darren Bundock and Steve Brewin will be contesting the 2016 World Titles in Holland.

The standard of A Class sailing in Australia is very high, and here is also a strong sense of camaraderie and friendship.
No matter where you come in the fleet, there is a lot of fun to be had, both on and off the water.