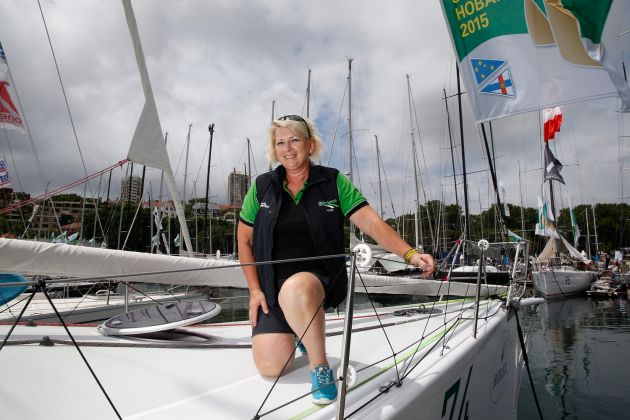 As Boxing Day dawns, the mood on the dock at the Cruising Yacht Club of Australia gets seriouser and seriouser – there is only so much time left to check, double check and check again those hundred little bits and pieces, those $5 fittings that can bring a whole campaign crashing down off the NSW coast.

Stomachs tighten a little, the latest weather maps become ever more compelling, but Brisbane’s Stephanie Kerin is having a ball. The atmosphere, the bustle, the boisterous hubbub of the bar after a busy day are all appealing, and she is going to do her first Rolex Sydney Hobart at the wheel of her very own boat.

What more could a woman want?

A great adventure that has been more than a year in the making.

“When we first got Dekadence (a DK46 with four Hobarts under her keel already) 18 months ago, we knew we wanted to do the Hobart, but we also knew that we wouldn’t have everything ready in time for the 2014 start.

“We thought okay, 2015 it is,” Kerin says. “We had to get a crew together in Brisbane to race regularly, but since none of us have done a Hobart, we also had to find some guys in Melbourne (via Facebook initially) who had done a few to bring that sort of experience to the boat. They flew up from Melbourne to do the Brisbane Gladstone and Brisbane Keppel with us.

“To do the Rolex Sydney Hobart from Brisbane you’ve got to be organized from day one.  As well as getting the boat itself organized for the race, you’ve got to worry about the delivery down to Sydney and think about how you are going to get the boat back to Brisbane from Hobart. Managing crews in two cities – it’s just a lot of organisation.”

And what have the older hands told Kerin to expect?  “The worst,” she laughs, “but I grew up in Hobart, I’ve always followed it. My dad did his first Hobart in 1984, which was a very tough race. I remember he was pretty grey-faced when he stepped ashore.”

Still, she has plenty of confidence in the sturdy Dekadence, and isn’t at all fussed that it looks like the fleet will have to bash its way into 25 to 35 knot southerlies on the first night.

Kerin is pretty new to ocean racing though. She says she’s always been very competitive and sailed a lot as a kid, but time and life intervened. “We only started big boat sailing four years ago, when we bought a cruising boat. But then we felt we wanted to get more serious, go a bit faster.  Dekadence is a racer/cruiser so there is still a bit of comfort, and we love that too.”

Stephanie is one of four female skippers in the 2015 Rolex Sydney Hobart, three of them are owner/skippers, and there are scores of women crew spread throughout the fleet. “It’s good to see so many women participating, but it is still a male dominated sport,” Kerin says.  “It would be great to encourage more women owners out there.

“We haven’t pinpointed any particular boats we especially want to beat. The boats around our size will be our benchmark, but my personal challenge is to beat the other women.”

Kerin is pretty sure that this will not be her one and only Hobart. She has discovered that she really enjoys ocean racing, especially the teamwork involved and has three principal objectives that will tell her all that preparation has been a success.

The first two fit with Kerin’s skipper’s hat: “Finish the race, and if we finish in front of boats the same size, we will have done well.”

The third, she sounds more like an owner: “Break no gear!”