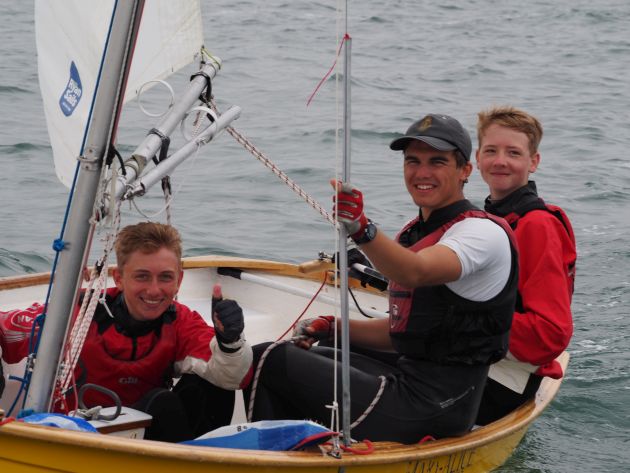 As has been the case for many years now, the outcome of the Stonehaven Cup came down to last race of the event. Indeed, in this regatta, it came down to the very last 50 metres of the last race.

Clare Carew and her crew of Rosie Murry and Darcey Holmes in C183 ‘John Akhurst’ was just one point behind in C181 ‘Mary-Alice Auxiliary’ and while a couple of other boats might have been able to win, it was really down to these two crews.

There is nothing like the intensity of a regatta to refine the skills of sailing teams and for all the kids in the 87th Stonehaven, as it has been for all the crews in years gone by, this regatta is the equivalent of months of training each Sunday. The start was very even and after six days of sailing, the entire fleet made a very close and clear start.

The front runners for the regatta all made clean starts and the fight was on for ‘clear-air’. Nick Smith and his crew in C186 ‘Dorothy Linacre’ made the early break, but had Clare and her crew just seconds behind at the first turn at the top mark. By the bottom mark, the light weight ‘John Akhurst’ crew appeared to have a slight margin over ‘Dorothy Linacre’ but there was nothing in it. Of interest to all was the relative position of ‘John Akhurst’ to Tristan on ‘Mary-Alice Auxiliary’ and the news wasn’t good for Tristan. He was on the end of a couple of unhelpful (for him) wind shifts and was buried back in the fleet.

The race appeared to be between Nick on ‘Dorothy Linacre’ and Clare on ‘John Akhurst’ who had a clear lead over the rest of the fleet going into the last downwind leg with Nick in front by a few metres. As the downwind leg progressed, Patrick on ‘Aussie II’ was closing in and also Nelson Dean on ‘Mollie G’.

All spectators were literally sitting on the gunwales (or the edge of their seats waiting and watching. First around the bottom mark for the last time was ‘Dorothy Linacre’, then Clare in ‘John Akhurst’, with Mollie G and Aussie II closing. ‘Mary-Alice’ was nowhere, but wait! Tristan had to go radical and instead of the conservative lines he had taken up the centre of the course for every other race, he went wide to the right, almost to the lay-line. Yes, it is fair to say he had nothing to lose.

Nick and Clare went left. Pat and Nelson came up the middle. Just a couple of tacks and 100 metres to the finish.

The middle and right of course was the better approach. Nick tacked for the final approach, but Nelson was already on starboard and in clear air below Nick. He had speed and crossed just a boat length on front. Then came Patrick, but where was Clare? She has to simply be in front of Tristan at the finish and she has her hands on the fabled trophy.

Tristan was in his own line of breeze on a starboard tack making the line, flat and fast. Clare was buried in other boats and less wind. Tristan was scorching. You could feel the tension. Clare was at or near the front for the whole race and was now getting swallowed up. The tension was palpable. To hoots and hollers all round, Tristan, Moritz and Steve on C181 ‘Mary-Alice Auxiliary’ crossed just 90 seconds ahead of Clare, Rosie and Darcey. They had won the Stonehaven Cup for 2016. You may view all the results here –

Tristan was second by one point last year. He has now got the ‘big one’ and can be very pleased with himself.

What a great 87th Stonehaven Cup we had. Huge thanks to the volunteers from RMYS and the great support from the volunteers of other clubs who made this event the success it was. Every day we were treated to our teenagers being challenged and they all came out winners for their respective achievements. For some it was simply getting around the course each day. For others it was overcoming the disappointment of setbacks out of their control and for others the lesson of sailing tactics and strategy. Every single participant will come away from the Stonehaven Cup regatta a better sailor and stronger person. Well done to all.

Today, 88 years on, each participating state hosts the Stonehaven Cup on a rotating basis. The event has been run at Largs Bay SC in South Australia, King Island Boat Club, Grassy, King Island, Royal Melbourne Yacht Squadron, and of course Royal Brighton Yacht Club – trustee of the Stonehaven Cup since 1945. Each event is seemingly more memorable than the last. Competitors make friends and develop a camaraderie not readily seen in other classes.

A special characteristic of the 12 Foot Cadet Dinghy is its capacity to carry a crew of three teenage sailors. Most crews are made up of a competent and skilled skipper, a moderately skilled forward hand, and in some cases, a beginner main-hand. Not all young race crews are of high performance standard. Crews are encouraged over many years to steadily build their skills to a regatta winning standard. This process makes our program more accessible to the average young club-member/sailor.

The dinghy itself has been substantially modernised to current standards. Optional modifications approved by National Council include a bermudan rig, side buoyancy tanks, a swing blade rudder, an alloy centreplate, and a beach trolley, with the rules of the Stonehaven Cup permitting any combination of the old and new equipment to be used in competition.

The racing is of the highest standard and crews display a very responsible attitude to the racing and their fellow competitors. They learn teamwork, leadership and community in the Youth Sailing Programs around the country that employ the 12Ft Cadet and three young people sailing together, learning to depend on each other – building friendships for life.

The Australian 12Ft Cadet has been described as “the ultimate youth sailing team experience.”