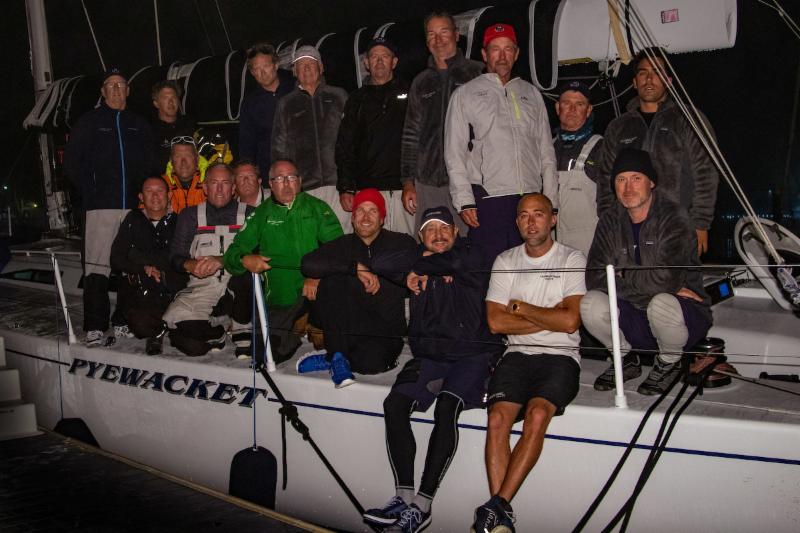 The rescuers and the rescued: members of the OEX and Pyewacket teams at their safe arrival to Marina del Rey - photo Allyson Bunting/Ultimate Sailing.

LOS ANGELES, CA – At about 2 AM PDT, a small crowd gathered at the docks of Windward Yacht Center to await the arrival of a 68-foot sailboat with 19 people aboard. This was 10 more than the nine they left with from Long Beach back on Saturday at the third start of the 2225-mile LA-Honolulu Transpac race. Roy Disney's Andrews 68 Pyewacket left Long Beach hungry for victory in their attempt to earn corrected time honors but circumstances intervened on Sunday night.

“I was just waking up when the radio had messages that you could hear sounded urgent, we heard it was OEX, so Benny [Mitchell] and I looked at each other and leaned in to figure out what's going on,” said Disney. “The next part was figuring out where we were relative to them. We assumed others were closer until our navigator said they were right in front of us. It was easy to turn a little left and we were right on top of them relatively quickly. We were all powered up going 14-15 knots, so slowing down was not that easy.”

Disney went on to say, “Then we came across the eerie sight of a mainsail up on a boat that was going under the waves… it's a pretty tragic thing to see, and these two lifeboats tied together with flashing lights on them.”

The sight was John Sangmeister's Santa Cruz 70 OEX foundering from water rushing into the boat through a hole in the stern where the rudder post used to be. Despite valiant attempts by his team to stop the flow and keep up with the ingress with pumps and buckets, the boat was filling fast with water. Liferafts were deployed.

“When I saw Pyewacket's running lights nearby and we were 4-5 feet of water inside the boat and I was sitting on deck I had waist-deep water in the cockpit, I said 'Alright boats, its time to go.' We have a watertight bulkhead on the bow and I feared the boat might go down by the stern and the mast would land on top of the raft.

“I felt really confident that Roy and his remarkable crew would look after us once we got into the boats.”

“Which we did, we had ribs and wine!” said Disney. “And dinner and fellowship, all 19 of us,” retorted Sangmeister. “They were more than gracious hosts.”

According to TPYC Staff Commodore Bo Wheeler, speaking at a news interview in Waikiki, this has been the only boat sunk in the history of the Transpac, a race that dates back to 1906. And while a record number of boats have returned this race, seven with rudder issues and one with a broken mast, this is also the largest turnout of entries, with 90 boats who crossed the start line in three waves starting last Wednesday.

Of the other boats that have retired, Macando is within site of land, and only Tim Jones's Olson 40 Live Wire still has a difficult journey ahead, 200 miles out with a jury rig proceeding at about 4 knots.

For the 82 boats still racing, the conditions are perfect downwind tradewinds sailing, with reports like “Absolutely a beautiful day of sailing yesterday. Looking forward to more of the same today,” coming from the Eddy Family's Cal 40 Calisto. Felix Basadre on board Michael and Samantha Gebbs's Pacer 42R Zimmer declared, “Best hour of sailing ever just after sunset last night. Beautiful sunset and sunrise. Seeing Orion's Belt was amazing, we could reach out and touch it.”

Nearly everyone is in the tradewinds now, enjoying “perfect” sailing conditions, and the race leaders have crossed the
rhumb line en route to their final approach to the finish less than 1000 miles away

The race leader in elapsed time – Jason Carroll's MOD 70 trimaran Argo – has less than halfway to go to the finish, and has been lifted on starboard tack to cross the rhumbline to Hawaii. They shared a comical glimpse of life aboard this high-speed leader:

The crew of the mighty Argo got over their onboard international social challenges yesterday by finding common ground in their hatred for Mountain House Breakfast Skillet freeze dried food. Honestly, freeze dried eggs just shouldn't be a thing. Just like the sport of cricket.

Giovanni Soldini's MOD 70 Maserati's damage reported yesterday is not slowing her down too much: she has many miles to catch up but at 1100 had an average speed of 23 knots and covered 513 miles in the past 24 hours with 1017 miles to go. At these speeds that's only about 4 hours astern of Argo, so the expected fight between these two and Peter Cuningham's MOD 70 Powerplay may well be heating up in the next two days.

And the fastest monohulls – Comanche and Rio100 – are working through the middle of the second wave fleet at speeds of 19 and 18 knots, respectively. John Miller's Beneteau 46 Tropic Thunder sent a note and screen graphic from their routing software to show Comanche 8.8 miles away “in their neighborhood” proceeding at a relatively good clip: 20.8 knots compared to their 6.8 knots.

Progress for boats on the course can be followed on the 4-hour delay YB tracking found from this link https://yb.tl/transpac2019#.