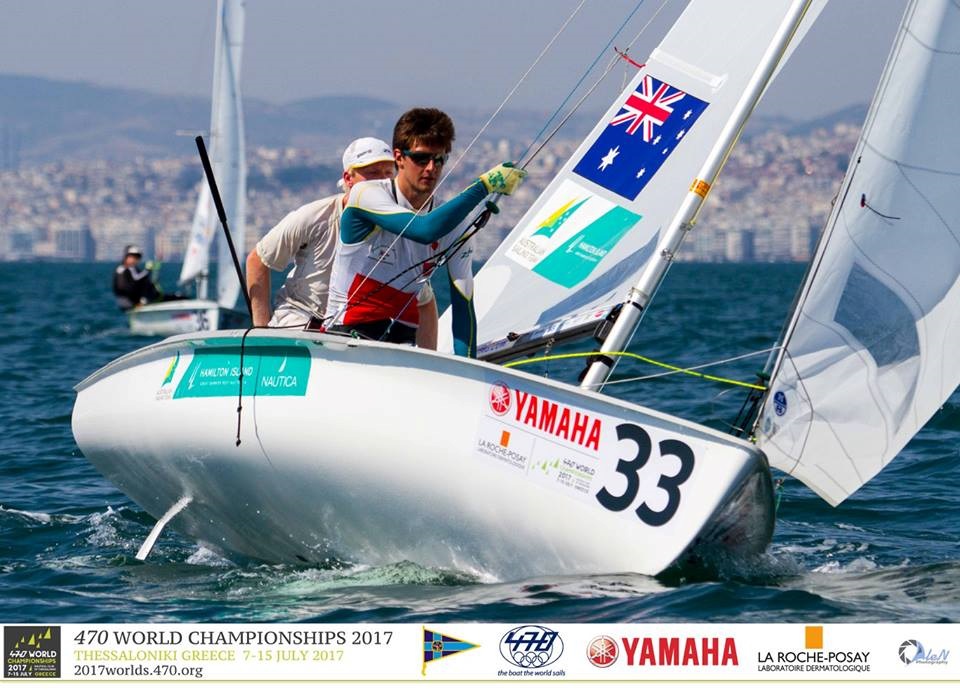 It was another good day for the Australian squad, sailing on Thessaloniki Bay in northern Greece at the 2017 470 World Championships, with two young crews working their way steadily up their fleets.

Chris Charlwood and Josh Dawson, sailing at their second ever international regatta, had a great day. Their fourth and sixth placing in the Men’s Gold fleet today was only beaten by the regatta leaders, the Swedes Dahlberg and Bergstrom who continued their consistent run with a second and third. Matching their young team mates overall result today, fellow Australians Mat Belcher and Will Ryan had a ninth and then a last race win to retain their overall second place.

In the boat park, Charlwood and Dawson were obviously pleased with their days work.

Charlwood said, “This was our first day of World Championship Gold fleet racing. The standard is higher. It was most noticeable on the start line, everyone’s so experienced and it is just harder to keep clear and hold the line. A very good day today, we are happy.

“We are little bit light but I don’t think that made much difference today though. Pretty powered up at some points, we had up to 12 knots of wind.

“From both starts we got some clean good lanes on the first half of the upwind, then kept in phase and were well placed at the top mark and on from there. Conditions were not as left biased today, there were both left and right shifts and I think that is what surprised the fleet.

“The second race for us was a replay of the first, I guess that is why the result was so similar.

“Our target going into this regatta was to qualify for the Gold fleet, so everything after that is a bonus. There is still a long way to go in this regatta and we will continue to take every race as it comes.”

Belcher and Ryan were satisfied too. Ryan reported, “Lighter breeze than the other days. So, racing was a little bit harder.

“A long postponement at the beginning and the first race we only did one downwind leg. The whole fleet was really close together and that makes it chaotic, specifically at the last bottom gate. We were buried in the pack but made gains downwind and that got us back to ninth.

“The second race was better and we were in the top group on first upwind and slowly kept forwards. The Turks beat us over the finish line but they were OCS, so we won.

Mat Belcher commented, “Chris and Josh sailed well today. Obviously, they have a very good coach (Victor Kovalenko) and they are gaining in confidence all the time.

“There is plenty of time for us to move up, with four more Gold fleet races to be sailed, all these forecast to be in similar winds as we had today.

“We are happy to be in the mix in these light conditions, for us sailing in Australia we rarely see this amount of light weather sailing, so to have the Europeans in Monaco and now the Worlds in Greece both light wind regattas are a great help as we work towards Tokyo 2020.”

In the women’s Gold fleet Nia Jerwood and Monique De Vries, sailing at their first 470 World Championship continued their march up the leader board moving from 18th to 13th with a final race fourth, after a drop in the first race of the day.

They were not the only ones to move, Rio Gold Medallist Mills and crew McIntyre (GBR) stumbled with a 14th and ninth to drop back to second, behind Skrzypulec and Gliszczynska (POL).

Jerwood said, “It was definitely more challenging today sailing in Gold fleet. We had a tough first race, learning some lessons the hard way, we were 24th. We moved on into the second race with clear heads, using the experiences from the previous race we finished in our best result so far, a fourth.

‘‘With four more final races to go our aim is to sail as consistently as possible and see how close we can get to the top ten.”

Rio Olympians Carrie Smith and Jamie Ryan are now 28th having recorded a 19th and drop of 27th. Dana Tavener and Katherine Shannon racing in the Silver fleet are now 52nd overall while Shellee Wright and Amelia Catt are 54th.

Gold and Silver fleet racing will continue for both Men and Women on Thursday and Friday with two races scheduled for each day. On Saturday, the top ten Gold fleet boats will compete in the double points medal race.