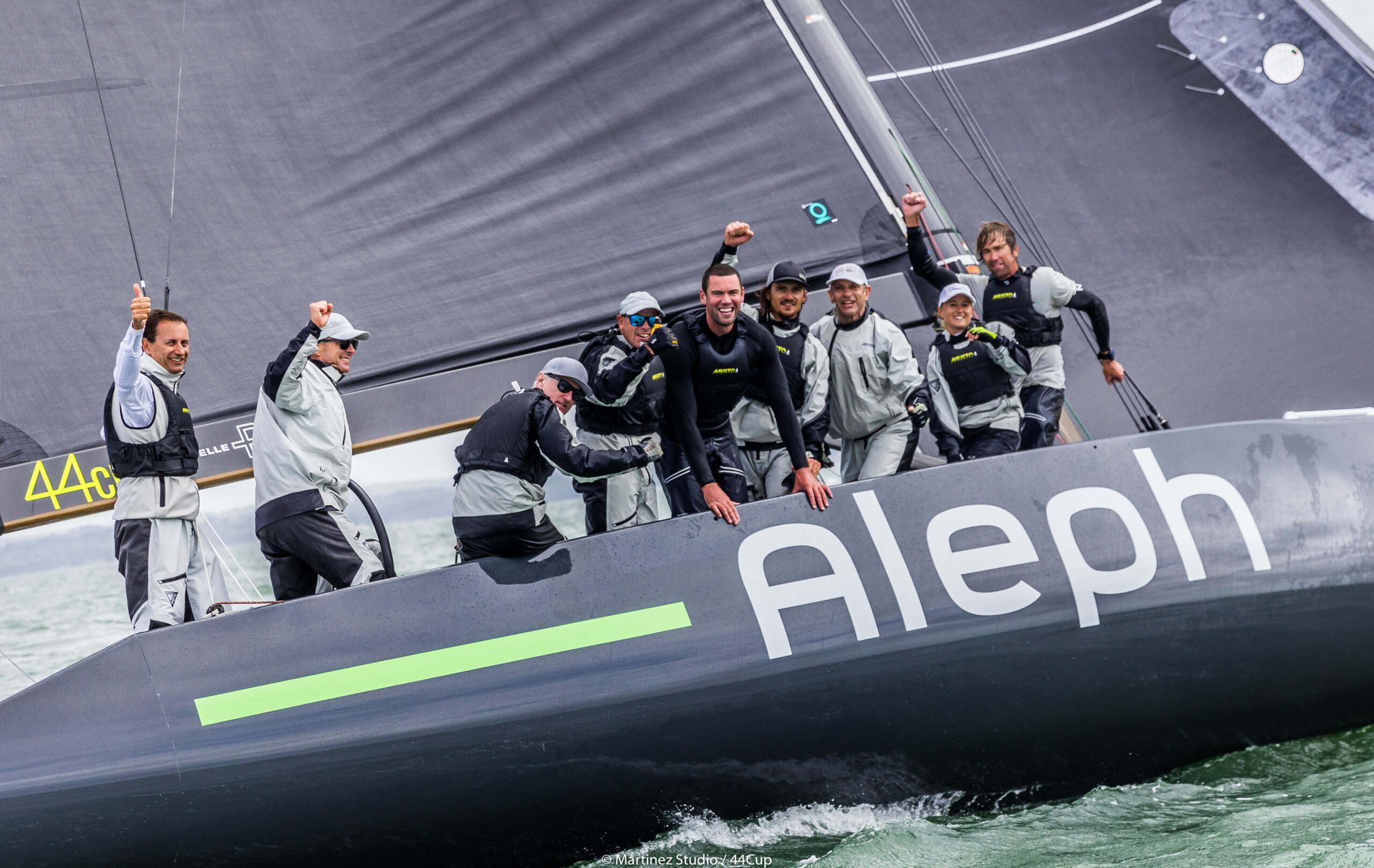 The final day of the 44Cup Cowes was always going to be big. Despite the overnight seven point gap between the leaders Aleph and second placed Ceeref, experience told Hugues Lepic and his team that they should take nothing for granted.

Behind them the battle for third was intense with three teams on equal points.

But few could have anticipated the intensity of how the final day played out.

More breeze was always on the cards with the forecast showing over 20 plus knots. And this was precisely what the fleet got. Yet this time around the tide was with the wind most of the day making for flatter seas, which in turn meant that there were some superb high speed sleigh rides downhill.

The pace was now at full bore and when it came to mark roundings the pressure was on. Crash gybes, kite trawls and round ups delivered plenty of action at the bottom end of the course.

And when it came to the way that the points shuffled out to close the 44Cup Cowes, there was plenty to talk about.

The day started with plenty of breeze and a forecast that said it would stay – It did. But, along with the tide direction which would be east for most of the day, that’s where the certainty stopped.

In the first race CEEREF powered by HRASTNIK 1860 smoked around the course to take the first win, leaving Aleph, who finished in fifth, to wonder where their points buffer had gone.

Charisma had finished second, their best of the series and possibly a trigger for believing that more was possible.

In the second race it clearly was as they took their first win of the week with Aqua in second.

By now the points table had been compressed and shuffled, the last race would decide a great deal. It did so in dramatic style, especially on the last downwind leg where boats hit 22 knots in the relatively flat water.

In the end it and after some stressful moments deep in the fleet, it was Aleph who took the overall win by one point.

“This was an amazing day, a lot of stress but three great races, great competitors and for us it went all the way to the last run,” said Aleph’s owner Hugues Lepic. “Winning any race in Cowes is a treat, but winning an event is something very, very special. A lot of our points margin from earlier in the week got eroded but we managed two decent last races.

“I’m so pleased and happy for our team that has put in so much effort. We have been improving over the last two years and now we can show it.”

With two wins on the final day, second placed Ceeref knew that they hadn’t left much on the table.

“We knew we had to come out firing today because we had a few points to make up,” said tactician Adrian Stead. “We had 27 knots of breeze during the gybe for the committee boat for the final finish, but we pulled off. It was hard though and could have changed our fortunes completely.

“But what a race, everyone overlapped at the top mark on the first rounding in the last race after a 1.4nm beat is testament to just how close the racing is in this fleet. Another regatta decided on the last run of the last race which is awesome.”

For Chris Bake, taking the third podium spot was also a success but having been the catalyst for making the Cowes event happen the week had been particularly special.

“It’s been a great event. Showcasing the 44s here is really important, so I was happy to help get the fleet here,” he said. “It’s a boat that I think deserves to be more popular and we wanted to show the fleet off a bit and see if a few more owners would be interested in trying it.”