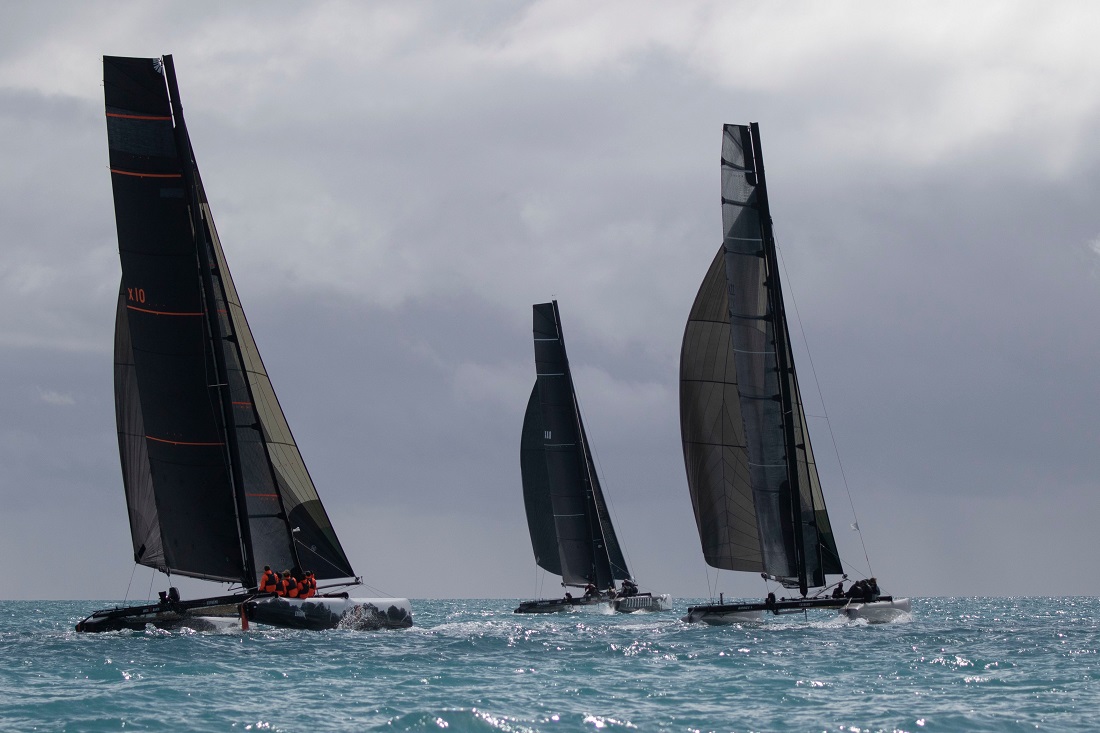 Three days of superb racing conditions and a fabulous social atmosphere a world away from lockdowns and the serious business of work life as competitors acknowledge and appreciate their week of racing at Whitsunday Sailing Club’s (WSC) Airlie Beach Race Week.

A forecast of sun and solid winds of 16 knots was way off beam. Instead, competitors were treated to a fickle 5-9 knot breeze early on, downpours and dark skies! However, the breeze picked up later in the day with up to 20 knots reported from the course.

Local sailor Paul Mitchell has taken a grip on Multihull Racing’s Division 1, adding another win to the scorecard with the Extreme 40, Angus.

“The Extreme is great fun. It’s good to have such close racing,” say Mitchell who is racing one for the first time at competition level aboard Angus. The local is normally at the helm of Ullman Sails, which he sold last year.

“We sailed in quite a nice breeze and carried the system with us right up to Olden and halfway to Grimston Point and then became becalmed. When we all got down to Olden there was only about three seconds between us in 20 knots all the way and then got just in front. We got the new breeze first and just got away,” he said.

Mitchell was at pains to point out: “Michel (Back in Black) should be leading, not us. They split their main yesterday when they were in front and the other two slipped through.”

Mark Leitner continues to lead Division 2, adding a second to his scorecard with Leitning Storm, a Prescott Firefly 850.

“It’s a pretty good feeling, that’s for sure,” Leitner said. “We’ve had a great couple of days here, it’s been heavy wind, wet and cold with sun at times. We’ve come down from Cairns. The racing has been fantastic.”

“We’ve been keeping up with a couple of big boats, which is a surprise to them and to us. Today was such close racing with Rushour and G’Nome. We were neck-and-neck all the way to the end in 5 to 20 knots of wind. It’s good the racing is so close.

“This is our third Race Week. It’s been awesome they put it on for all of us who just wanted away from lockdown and to get on the water. It’s a fantastic regatta. Hats off to them and the volunteers. Without them, we wouldn’t have a regatta,” said Leitner who is enjoying being stationed at Port of Airlie Marina and the short walk it provides back and forwards to WSC.

”I’m enjoying the racing this year. Last year we had little wind at all, so we didn’t do well. Our boat doesn’t like the light. So it’s been great racing, perfect. The competition is excellent, and the racing fair for all. I’m really enjoying it, and the crew are too,” the Queenslander said.

“The vegie boat won today, but the tomatoes were looking a bit wilted,” he commented, referring to Jono and Gemma Winterbottom’s About Time. The Sydney couple is growing tomatoes and herbs off the stern and have met many new friends because of the curiosity.

On Pioneer Bay, the WETA trimarans reeled off three races. Andy Duffield tops the leaderboard after scoring 3-2-1 results, adding to his bullet of Friday with ‘Wee Tri’. His toughest competition is Hard Decision, sailed by Dave Vockler. The latter is four points off the lead, with Duffield the more consistent of the pair so far.

“The racing is all pretty good. We did windward/leewards. It was pretty flukey earlier; a light 5 to a max of 12 knots. The last race was really good, we got 15-18 knots, which I liked.”

This is a first at Airlie for the WETAs. “It’s really good racing. This is a fairly new class and we want to showcase it so people can see that anyone can sail them. Even us older people,” Duffield said, explaining there are sailors in their seventies are among the contenders. “They’re dinosaurs,” he quipped, with the expected retaliation coming from those parties.

“They’re a great little boat. We just love doing it. It’s a good life and enjoyable. They’re good fun – lively. If it blows hard enough, they will tip you in the drink, and they’re quick.”