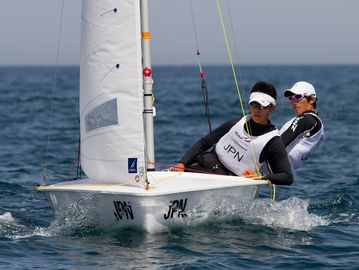 26/12/2015
There are two meanings of the word open when it comes to Sailing. You have 'open' which is both male and female in the same fleet racing against each other. Then you have the kind of open that we have in the 420 at the 2015 Youth Sailing World Championships. Wide open.
Usually in a regatta you can hedge your bets and say who will give you a good show and be up and around the medals. In Langkawi, Malaysia we have been previewing the other classes and we have done it ourselves. But the 420 is really going to be an opportunity for someone to throw their hand up and say 'that medal is ours'.

From the 24 girls teams competing, there are very few returning competitors. Looking back through the Tavira, Portugal 2014 Youth Worlds 420 results, you have to head down to sixth to find a girls returnee. Carmina Malsch from Chile will be looking to better her finish last time out with new helm Renatta Parodi.

2014 winners Spain and silver medallists Israel don't have a team attending this year in the 420 girls but the third placed Polish team do. In the guise of Julia Szmit and Hanna Dzik, they would need to carry on where their predecessors Ewa Romaniuk and Katarzyna Goralska left off.

The only full pair to return to the girls 420 fleet are Australian's Nia Jerwood and Lisa Smith. Australia left Cyprus 2013 with a gold medal in the bag, but Jerwood and Smith couldn't quite hit those heights and finished ninth in their 2014 Youth Worlds outing. Surely they will be determined to improve on that result and using their experience must fancy their chances against a field of Youth World newcomers.

In home waters, Malaysian pair Khairun Hanna Afendy and Siti Nur Norulakhairi will be looking to use their local knowledge as they try to break in to the top 10 following an 11th place finish in Tavira 2014.

Historically, France have won the most 420 medals at the Youth Worlds, but it will be up to girls Jessie Kampman and Anael Ponthieu to continue that tradition as there is no French boys team entered.

And to the boys section, there is a little bit more to go on than the girls. Current Youth Worlds gold medallist Singapore's Jia Yi Loh will be looking to keep up his winning ways, but will have to do it with new crew Matthew Lau in the 32 boat fleet.

Winning their first ever 420 medal in the last edition, Malaysia will be hoping to go one better, and have pinned their hopes on new pair Muhamad Mohd Yusof and Naquib Shahrin. Again the duo will be hoping home waters tip the balance in their favour and they can keep one of the nine gold medals in Langkawi in their home nation at the end of the competition.

Another one to watch will be Japan's Kataro Matsuo. He finished third as crew last time out, but has now made the switch to helm. His new crew Takumi Miura will be looking to his partner for encouragement and experience of the event, and both will be hoping a change medal of colour is on the horizon.

Australia will be represented by Alec Brodie and Xavier Winston-Smith who have shown excellent form in local competition leading up to this event.

Sailors will start to arrive at the Langkawi venue on 27 December where they will receive the supplied equipment from Ovington, UpMarine, Nautivela, Sirena Voile, Neil Pryde and Laser Performance/Maclaren.

From there, the ceremony on 28 December will signal the start of the Youth Worlds before racing commences on 29 December. Racing will run through to Sunday 3 January with Friday 1 January a lay day for the sailors.