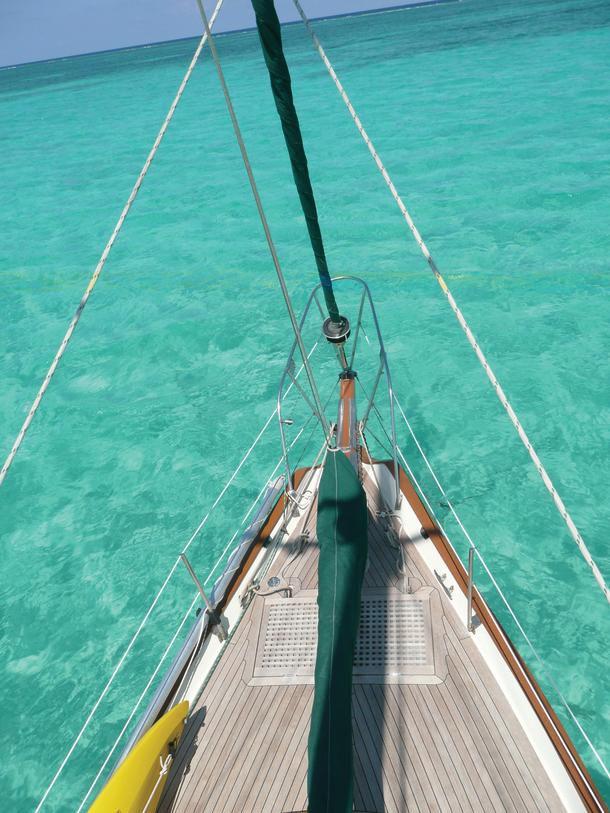 In 1994, while backpacking around Australia and eager for adventure, I signed up as crew on Aphrodite, a handsome
44 foot cutter rig from Melbourne embarking on an intrepid five month voyage to Italy. At the time I had no idea that the journey would not only introduce me to the enchanting world of cruising, but would influence the course of my life for decades to come.

Aphrodite’s departure from Sydney was delayed for a few months, yacht issues and projects that, with absolutely no cruising experience, I failed to understand. So when we finally sailed north towards Darwin, up the Capricorn Coast and past Lady Musgrave Island, we were behind schedule and with a daunting eleven thousand nautical mile voyage ahead: the Indian Ocean, a Red Sea passage, Suez Canal transit and a late arrival which promised to put us in the Mediterranean during cold stormy wintery months; there was half the world to traverse and an itinerary with no shore time to accommodate luxurious distractions.

So, much to the crew’s disappointment, we sailed through the starry night with nary a glimpse of the southern Great Barrier Reef’s most idyllic anchorage.

Many Australian mariners I have spoken to consider Lady Musgrave a bucket list destination and it is easy to understand why: the lagoon is home to some of the most colourful coral and marine life on the southern reef; the uninhabited sandy cay provides solitude, serenity and, at least between tourist drops, a convincing castaway experience; the anchorage offers all the lustrous, intoxicating hues and shades of the tropics and, from June to November during whale season, humpbacks splash and frolic in calm waters while lazily circling the lagoon like gentle seafaring sentries.

It is a compelling cruising destination for local and international sailors alike and lies just far enough away from the mainland to dissuade casual callers. About forty miles from the coastline, Lady Musgrave rests in a region where offshore forecasts should be observed. Impressive Pacific Ocean swell can be felt under your keel, while the steady reassurance of land is, at some point, completely lost to the horizon.

Too far for a return day sail and a lagoon littered with keel-crunching bommies, an early arrival, keen watch and good light should all be observed. Mild seafaring challenges for sure but, for first timers at least, a voyage to Lady Musgrave offers a chance to sample or hone moderate passagemaking skills and when the anchor has safely settled into sand, the satisfaction of a well-earned sundowner and a feeling of accomplishment that comes from an arrival in a quiet lagoon surrounded by the sea.

Aphrodite’s voyage in 1994 was a resounding success: even after dragging anchor across Fannie Bay at high tide and careening off neighbouring yachts; fleeing pirates south of Java and battling sixty-knot winds in the Mediterranean. We raised Fiumicino, the sea port to Rome, on November 25th a remarkable achievement considering that, en-route, we discovered no one onboard had any ocean crossing experience or meaningful navigation skills.

But the journey gave me the adventure I was seeking. It also gave me a new dream: to sail around the world on my own yacht and perhaps one day, the opportunity to return to Australia and visit a tiny lagoon on the Southern Great Barrier Reef.

After Aphrodite’s voyage I moved to America and married. For ten industrious years in New York my wife Catherine and I worked and planned towards our own adventure.

We bought a 1981 Cabo Rico which, like Aphrodite, was a full-keeled cutter rig sloop complete with classic lines, teak decks and a clipper bow that seemed destined for the tropics.

We spent seven years restoring the yacht to world cruising readiness, renamed her Dream Time and, in the summer of 2007 with equal measures of excitement and anxiety, waved farewell to New York to begin our epic voyage around the world.

Perhaps to make up for Aphrodite’s hurried schedule, we have spent the last ten years cruising at a pace that would make even a sea cucumber seem zippy: six months sailing down the east coast of America; a year in the western Caribbean and eight unforgettable years circling and exploring the exotic isles of the South Pacific, including the Galapagos, Marquesas, Tuamotus, Society Islands, Cooks, Niue, Tonga, New Zealand, Fiji, Samoa, Vanuatu, New Caledonia. It is a pace we are proud of.

But even after exploring some of the most remote corners of the world, Dream Time’s arrival in the country where the idea of this journey originated, is among our most significant.

Anchored in Farm Cove by the Opera House, we celebrated our arrival at the epicentre of excitement on New Year’s Eve with courtesy flags flying from every country visited since our voyage began. We spent the summer exploring all the bays, coves and anchorages of Sydney Harbour. Then in July, the same month Aphrodite had sailed through Sydney Heads bound for Italy, we retraced her wake up the coast. After over two decades of travel, escorted by whales under a rich cerulean sky, we raised Lady Musgrave Island.

In unseasonably tranquil conditions and for two glorious weeks, without wind or waves to disturb our sanctuary, Dream Time rested under a full complement of canopies inside a natural, sundrenched infinity pool. We toured every inch of island and lagoon, Catherine exploring by kayak, circumnavigating the cay at high tide, drifting over coral formations, schools of reef fish, black tip sharks and friendly sea turtles, while I dove outside the pass to spear coral trout and hunt lobster along the drop-off.

Whales visited in a never-ending parade of splashing tails, swaying dorsal fins and explosions of whitewater. One time, during a drift snorkel where the turquoise fell away to a much deeper world of sapphire in water so glassy and clear giant eagle rays could be seen gliding in slow motion across a seabed eighty feet below, two curious humpbacks joined me. Nothing is more humbling or wonderfully terrifying than a forty foot whale swimming directly at you.

For a few exhilarating minutes they swam with me, pirouetting together in slow motion, hovering around and underneath me, almost within reach, in an overwhelming mass of glistening shadows and dazzling reflections, watching me through enquiring eyes before gently rolling away to consider a pod of dolphins playing in deeper water.

It was an unforgettable moment and, like this lifestyle on Dream Time and our slow migration around the world, a rare privilege. We have sailed over thirty three thousand nautical miles since we left New York, but it has taken twenty three years to finally experience Lady Musgrave Island. It was worth the wait.

Thank you Australia, it is great to be back. ≈