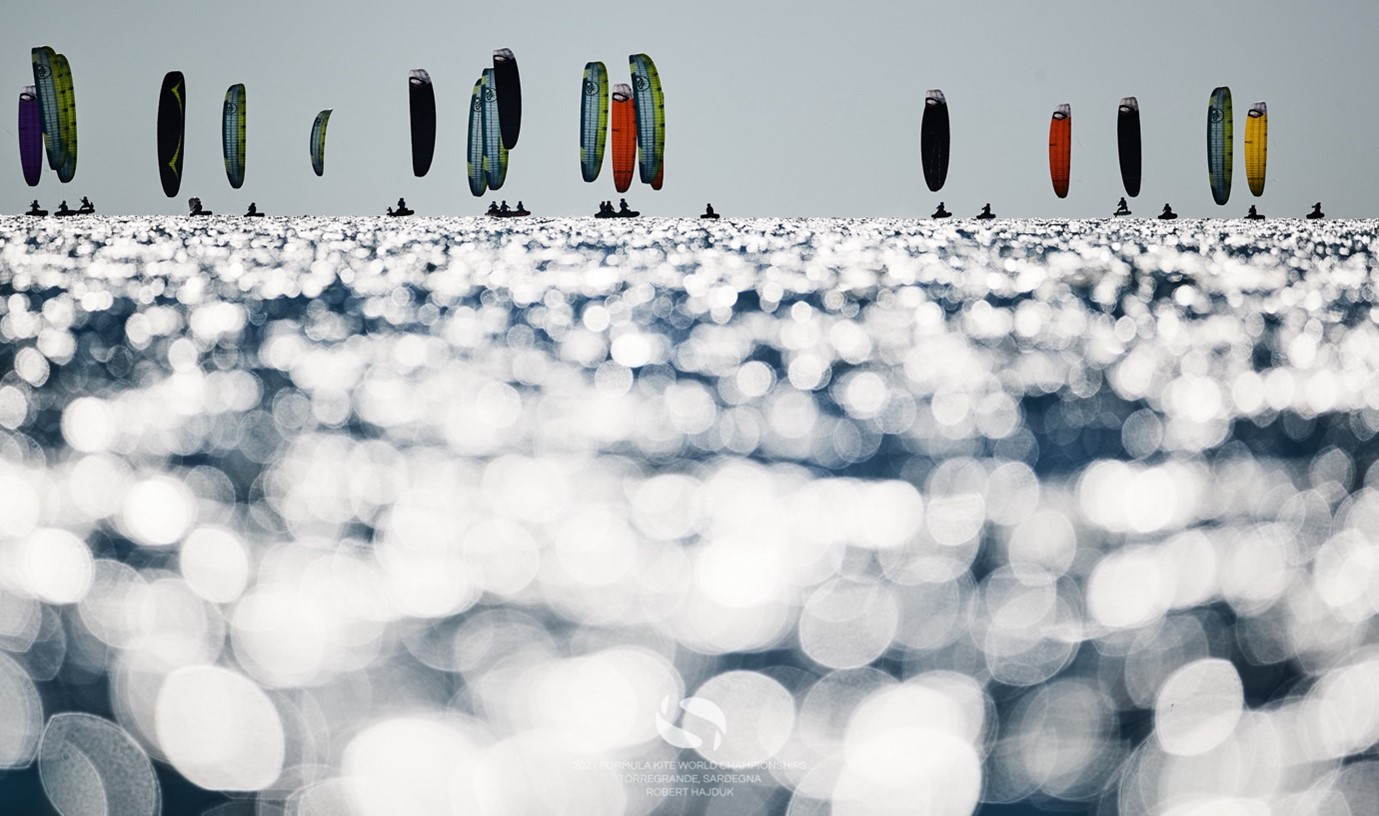 Only the finest margins separate the top of the order after scintillating racing, as the Formula Kite World Championships are about to hit the final series on the penultimate day of the regatta on the Gulf of Oristano on the Italian island of Sardinia.

The French duo of Axel Mazella and Théo de Ramecourt are equal on points at the head of the men’s standings after a day of quick racing, in gusty and shifty side-shore breezes that reached 18 knots. But occasional lulls down to 7kts were a source of drama at times for most of the athletes.

Behind the pair, only three points separate the seven racers lying in positions four to ten; such was the intensity of the battles all over the trapezoid track’s flat waters, just off Torregrande’s beach.

In the Women’s competition, the difference between the leaders was almost as tight. Reigning Formula Kite World champion, US’s Daniela Moroz, retains her slender lead despite uncharacteristically dropping a bullet.

On the fourth of the scheduled five-day regatta at the International Kiteboarding Association (IKA) Formula Kite Worlds Torregrande, the leading men and women will face-off against one another after the opening three days of the qualifying series established the pecking order.

A remarkable fleet of 138 athletes -89 men and 49 women from 34 countries and six continents- are vying for the world titles after a break of more than two years because of the pandemic.

It is the biggest kitefoil fleet to ever gather, reflecting mushrooming interest, as the event marks the countdown to the Olympics and kiteboarding’s much-anticipated debut at the Paris 2024 Games.

With France hosting the Olympic sailing regatta on the waters off the city of Marseille, the well-resourced national team boasts a squad of 21 athletes at the Worlds, including a number of the world’s fastest racers.

Frenchman Axel Mazella moved to the top of the order, with quick racing in which he rarely put a foot wrong. Mazella saw off tough opposition that included Slovenia’s Toni Vodišek, scoring five bullets in his day’s six races.

“I don’t know why, but Toni Vodišek wanted to match race me,” Mazella said.

“Everywhere I went he was like a shadow, so I decided to become more aggressive and tried to put more riders between me and him. Then I tried to just focus on my own game. My starts were often poor, but I’m super-happy with my downwind speed, where I could take and hold the lead.”

Mazella also tried to keep track of the leaders, racing in the three alternate men’s fleets which could be proven crucial to the outcome of the final series should the wind falter over the weekend.

Fellow countryman, Theo De Ramecourt had a storming performance in the north-westerly breezes that built during the day but let his overnight lead slip. A couple of costly errors when he lost focus took the gloss off his three bullets.

“It was a really good, if long day,” De Ramecourt said. “I made a couple of small mistakes which cost me two bullets. On the last reach in one race, I hit the bottom mark because I was somewhere else in my mind. Another time I went right and it just didn’t work because of the wind shifts. The conditions were hard, but really nice. I am happy.”

In another fleet, Singapore’s Max Maeder, 15, the recently crowned Open European champion, had an equally stellar outing clinching four bullets. However, he slipped to third place overall, failing to finish in the teasing conditions of the opening race.

“On the downwind leg, my 15m kite just tilted in a fluky gust and smashed into the water,” Maeder said. “It was really difficult to relaunch and that led me out of the race. I can’t complain about four bullets though, especially since the competition in my fleet was tough.”

Among those who battled with Maeder were the remarkable Italian Riccardo Pianosi, 16, who sits fourth overall, France’s Benoît Gomez and Croatia’s Martin Dolenc. A mere three points separate the trio.

The Women’s final series looks set to be similarly engrossing, with France’s Lauriane Nolot hard on the heels of the US’s Moroz in the overall standings. Nolot was battling in an alternate fleet and suffered several big moments.

Two tangles at a mark in separate races bracketed Nolot’s trio of bullets. In the first she got clear quickly, but finished down the order, while the second time she had to retire with a damaged kite.

“After the tangle in the first race, my tactic was just to be as fast as possible, so that I got to the top mark first and kept out of trouble,” Nolot said. “It worked and I got the bullets. Now I’m looking forward to going up against Daniela Moroz.”

Nolot was battling with fellow countrywoman Poema Newland, who managed to race quick and clean, profiting with two bullets and three second places, that leave her comfortably in third place overall.

Britain’s Ellie Aldridge, faced with the formidable task of racing against Moroz, came off a close second four times. But in her day’s last race, the Briton finally got the better of the American, who made a poor start and was unable to pass, giving Aldridge the bullet and fourth place overall.

“In that last race I got off to a good start. I had a good angle upwind. I had enough of a lead. She usually catches up on the second beat. But I just kept going and it paid off,” Aldridge said.

Catch all the action of the finals series and medal series which will be featured on Facebook Livestream on Saturday and Sunday and find out how the battles play out.