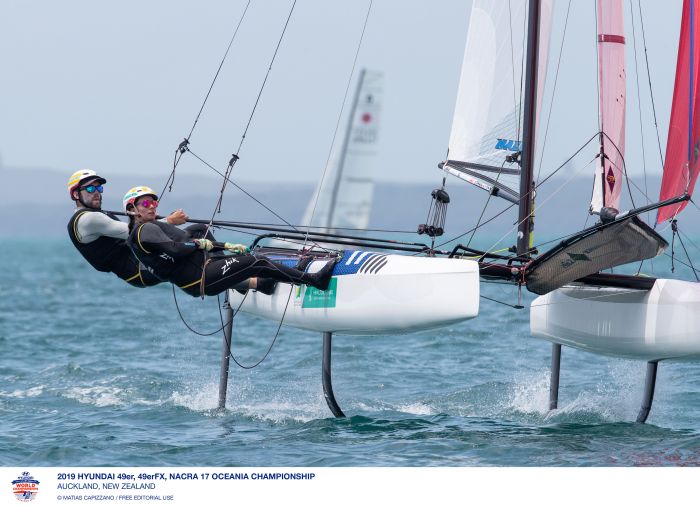 It was a day of contrasts on day two of the 2019 Hyundai 49er, 49erFX and Nacra 17 Oceania Championships. With breezes at almost the polar opposite to yesterday with a 10-12 knot seabreeze from the north, the fleets headed to the second alloted course areas off the coast of Auckland’s North Shore. These are the same waters which will play host to the 2021 America’s Cup, in which some of the 49er and Nacra 17 athletes will be competing.

The common theme from the first two days of racing has been ‘two good, one bad’. With some noteworthy exceptions, it seems putting three consistent races together is going to make the difference between Olympic qualification and selection, or packing your bags and lamenting what could have been. This comes as no surprise when you look at the caliber of sailors in the three high performance Olympic classes, which play host to some of the tightest racing in world sailing thanks in large part to the 14 Olympic Gold medallists and multiple America’s Cup winners amongst the ranks.

Bucking the trend was Great Britain’s Ben Saxton and Nicola Boniface, who once again put down three solid scores to take a healthy lead into the final day of racing. “Yesterday was pretty good. That’s the only time in an international fleet that I have gotten straight firsts, so that was pretty special,” Saxton said with a grin after racing on day two. “We started off with a first today, which was also pretty amazing and then we got a third and a fourth. It was hard to tell what was going to happen. You’d be looking good and then a couple of boats tack and you’re like ooooh”.

The Nacra 17 fleet saw five different winners from six races held today. The results didn’t include the reigning World Champions from Italy, Ruggero Tita and Caterina Banti. While the Italians were seen on the race course and at times leading, they appear to be using the racing as an opportunity for training not finishing any races.

The 49erFX fleet saw more consistent conditions with gainable shifts hard to come by. With this being only their second 49erFX World Championships, Canada’s Alexandra Ten Hove and Mariah Millen stepped out of the gate with a big win in race four and a second in race five. Despite both carrying illness into this weeks oceanias, they put their performance down to the basics. “We got off the line really well which is something we’ve been working on,” reflected Ten Hove. “We were really happy with our speed so being able to hold a lane and keep pace allowed us to pretty much sail where we wanted to, in the direction we wanted to and just manage the fleet well.”

While the Canadians are yet to qualify for Tokyo 2020 their performance is trending in the right direction and the results are following. “There’s six more spots given out at this worlds [Auckland 2019], so we’re fighting to be one of those top countries. Once Canada secures a spot, the Canadian selection will be a combined score from the worlds in Australia and the 2020 Princess Sofia regatta in Palma, Mallorca.”

Overnight leaders Stephanie Roble and Maggie Shea from the U.S.A. kept their results consistent and were joined atop the leaderboard by Brazil’s Martine Grael and Kahena Kunz, with local favourites Alexandra Maloney and Molly Meech, just three points further back.

The 49er fleet shared top honours throughout the day. Six teams scored wins in the afternoon racing but it wasn’t without drama. Australia’s Tom Needham and Joel Turner scored a solid win in race five, which was immediately followed by a disastrous start to race six after being shut out on the pin end of the line at the last minute. In the same race, Poland’s Lukasz Pryzbytek and Paweł Kołodziński were caught red handed on the international live stream trying to relocate the top mark of their course after a misjudged layline and the ill effects of Auckland’s tide saw them

At the top of the leaderboard, Austrians Benjamin Bildstein and David Hussl put down a one-two-two scoreline to launch themselves into first place ahead of Spain’s Diego Botin and Iago Lopez Marra. Climbing the leaderboard and homing in on their fellow countrymen is the reigning Olympic champions of Peter Burling and Blair Tuke. They now sit just three points shy of Isaac McHardie and William McKenzie, who are tied on points for third with Dominik Buksak and Szymon Wierzbicki from Poland.

While it is a fair assumption that Peter Burling and Blair Tuke will be heading to Tokyo in July for a shot at a third Olympic medal, their fellow Kiwi’s are not laying down without a fight. As well as McHardie and McKenzie, Logan Dunning Beck and Oscar Gunn are giving the New Zealand selectors something to think about; they took out 2019’s Kiel Week featuring the full complement of Olympic campaigners including Burling and Tuke.

With the teams split into gold, silver and bronze for tomorrow's finals racing, viewers can tune in to all the action LIVE and free at 49er.org/live from 11:00am NZDT.

Sky Sport will be broadcasting racing from the 2019 Hyundai 49er, 49erFX and Nacra 17 World Championship, December 3 – 8, on Sky Sport 9 to their New Zealand Audience, while SidelineApp’s coverage of the worlds is available to international viewers with a subscription fee of just 9.95 euros if purchased by November 30, or 14.95 euros there after.

Full results are available at: