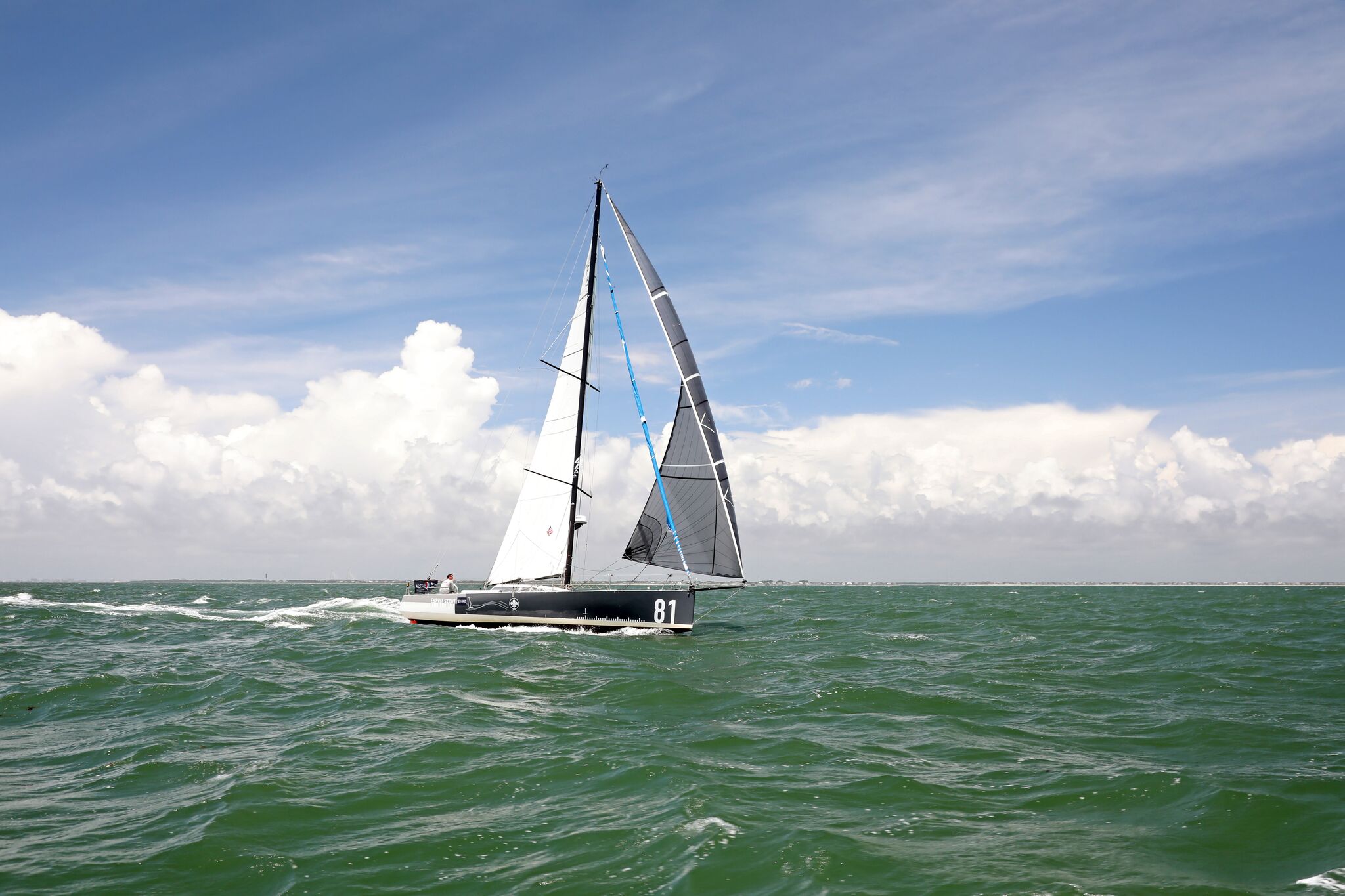 May 27 2018 – Charleston, SC –  In the last 24-hours of the Atlantic Cup there's been a significant consolidation in the fleet. Yesterday afternoon the boats were sailing north fast and furiously and were divided into three strategic camps – left, center and right.  Overnight, the French team skippered by Catherine Pourre and Pietro Luciani on 145-Eärendil decided to change course and head west across the top of the fleet, capturing the lead as they settled to the center. 107-Angola Cables has continued to stretch out to the east, but so far the move hasn't paid dividends.

127-Amhas skippered by Micah Davis and Rob Windsor picked the middle route and are holding on to a very thin lead. In Amhas' morning update, Rob said of the conditions, “it's changed an awful lot! It's really kind of a pain in the *&*(. The weather files said that we should have had 20 knots of wind and we have none! Right now we're under our solent and we're looking at Eärendil on AIS just 3.2nm behind us. We are just trying to keep the boat going fast, we've got some surfing waves from behind and we then run into the northerly waves so we're slamming a little now but it's all to play for here!”

54-Dragon was well positioned yesterday afternoon until they damaged their A2 spinnaker which pushed them to the back of the pack. Mike Hennessy said this morning, “we no longer need the missing A2, only because it is blowing 2.5 from the North with gobs of shear. Good times and Dragon conditions. Although we will need about 15 hours of this to be able to close the gap in excruciating slo-mo.”

The leaderboard shuffled through the night as the boats sailed into lighter winds left by converging winds from two different weather patterns giving a chance for the boats further back to consolidate their position.  As morning arrived, 95 – Talanta and 81- Esprit Scout moved up nicely into the top half the fleet. This morning Esprit Scout's Liz Shaw O'Toole said, “we had a very good day yesterday coming through the heavier breeze, we caught up some miles that we lost during the first day. We're thankful for the consolidation of the fleet but the light stuff is tough! We're dreaming of the 20 knots with our big beautiful A3 like we had yesterday! We're feeling great, tons of energy, there's still a lot of course left. Basically of all of our sail changes so far have been really clean all of our maneuvers have been great. We're feeling really good out here.”

The oldest boat in the race, 37-First Light and the much newer 101-Power of One are still the most westerly boats and appear headed to pick up any land breeze available. With the winds forecast to be light approaching New York Harbor, the sailing intensity will increase. Full concentration is required to keep the boat's momentum up, and constant attention to the weather gribs and current information can make the difference. First arrivals are anticipated for Tuesday morning between 4am and 6am.

Follow the race tracker for the most current boat positions: http://atlanticcup.org

The list of boats competing in the 2018 Atlantic Cup is as follows: