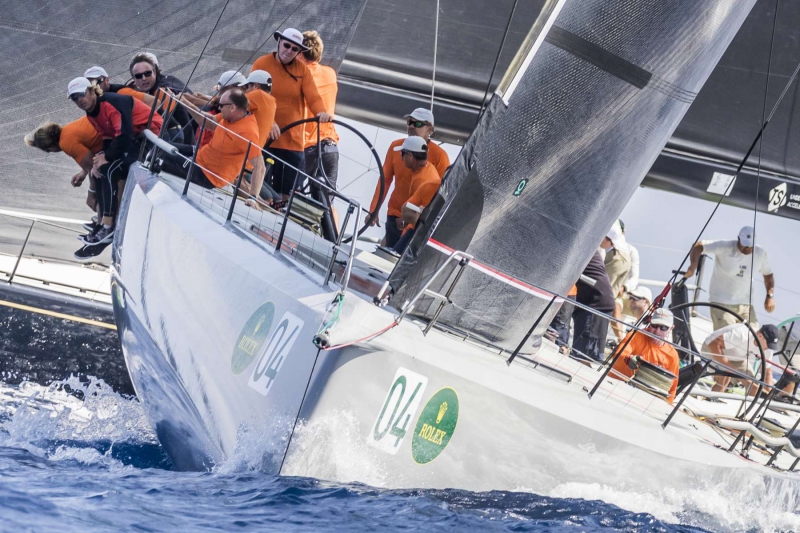 Porto Cervo, Italy: Today was the final day of racing in the 28th edition of the Maxi Yacht Rolex Cup organised by the Yacht Club Costa Smeralda in collaboration with Title Sponsor Rolex and the International Maxi Association.

On the final day, the Maxi72 and Mini Maxi Racers did two windward-leeward races while the rest of the fleet did a coastal race along the Arcipelago di La Maddalena. Breezes from the northwest building to 14 knots gradually came up against winds from the southeast. A dead zone formed between these two fronts and the Race Committee chose to shorten the course and end the day's racing off Capo d'Orso.

By the end of the event the German team aboard Momo won the championship, just one point ahead of Proteus. Bella Mente and Cannonball were third and fourth placed, just two points behind. Momo was also declared winner of the 2017 Maxi72 Class and best-placed yacht owned by a YCCS member.

In the prestigious Supermaxi Class, the 33m Ribelle had already won numerically by the end of yesterday's races. Nevertheless, her team gave it their all again today and placed second.

Win Win and Nilaya placed second and third overall. YCCS members Paola and Salvatore Trifirò, Ribelle's owners, had these words: “We wish to thank everyone who contributed to make this edition of the Maxi Yacht Rolex Cup as splendid as ever.

“Our victory is the fruit of a long and complex process that brought us to build a very innovative yacht. But we never would have gotten this result without the hard work of an exceptional team made up of some of the best sailors in Italy. We are very happy.”

In the Maxi Class, YCCS member Sir Irvine Laidlaw's Highland Fling XI edged out Nefertiti, second overall after placing first in the last two day's races. Rambler 88, with AC vet Brad Butterworth as tactician, placed second: “With a boat as fast as ours our real problem is our rating, not our adversaries on the water. But we're always trying to improve and are very happy to be here, Porto Cervo is a wonderful area to sail in.”

The Wally fleet was most numerous and saw the Wallycento Galateia won handsomely over Nahita and Lyra. Sir Peter Ogden's Jethou won in the Mini Maxi Racing Class, placing first every day and beating Spectre and Lucky, who finished in second and third places respectively, tied for points.

Roberto Lacorte's Supernikka won in the Mini Maxi RC1 Class where Wallyno and Wohpe placed second and third respectively. It was a fight to the end in the Mini Maxi RC2 Class between the Swan 65' Shirlaf and the Vallicelli 80' H2O. By the end of the event H2O's owner Riccardo De Michele had the Cup in his hands.

A huge crowd attended the prize ceremony of the 28th Maxi Yacht Rolex Cup in Piazza Azzurra, applauding the winners, as did His Highness the Aga Khan and his daughter, Princess Zahra Aga Khan.

YCCS Commodore Riccardo Bonadeo had these words: “It has been an intense week of racing. Optimal conditions and the Costa Smeralda's natural beauty are the elements that make this location uniquely suited for events like the Maxis, one of the most important events on the Med sailing calendar.

“This year's 28th edition has been remarkable in that it brought fifty yachts to Porto Cervo on the year of our fiftieth anniversary and this coincidence has only added to the joy to our celebration.

“One of the most significant aspects of the Maxi Yacht Rolex Cup is the passion for sailing that's so strong it's almost contagious. I want to thank our partner Rolex who supports us and shares our passion for sailing and the ocean, and I also want to thank the owners, their crews, the Race Committee, the International Jury and all the YCCS staff for making this event a success since 1980.”

A special moment was reserved for the presentation of the Commodore Alberini Perpetual Trophy. This Trophy, presented to the Owner and Crew that best embody the spirit of sportsmanship and fair play during the Maxi Yacht Rolex Cup & Rolex Maxi72 Rolex World Championship, went to SW96 Sorceress, owned by Will Apold.

Tomorrow, September 10th will see the YCCS 50th Anniversary Regatta with a large and varied fleet participating. Some Maxis have remained for the Yacht Club Costa Smeralda's festivities and some of the smaller J/70s getting ready to race in next week's Audi J/70 World Championship will also join the party.