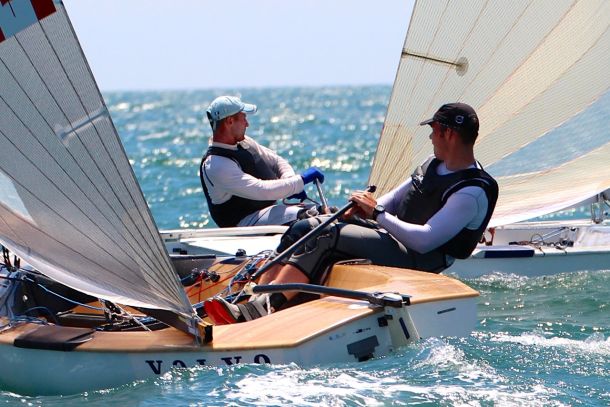 The Finn stars of the future (as well as some current stars) have gathered in sunny Valencia for the 17th Jorg Bruder Silver Cup, the Finn Class Junior World Championship. Around 30 sailors from 14 nations and three continents will compete in the championship, which is being hosted by the Real Club Nautico Valencia (RCNV).

Over the past week the sailors have been enjoying the fantastic conditions afloat with temperatures from 27-35 degrees and a regular sea breeze of 12-20 knots. These ideal sailing conditions led to two America's Cups being held here and also led Luca Devoti (ITA) to establish his Dinghy Academy in the grounds of the RCNV. Many sailors from the academy are competing in the championship.

The championship was officially opened in beautiful sunshine on the lawn overlooking the racing area. Corinne McKenzie (FRA) Executive Director of the Finn class said, “I really want to thank the yacht club for welcoming this regatta but especially welcome to so many Finn sailors over the past few years thanks to the great work of Luca Devoti at the Dinghy Academy here. This place is the home all year round of many Finn sailors and it plays a very important role in the development of the Finn class. We have here some of the athletes who are going to be the Finn heroes of tomorrow, and soon enough they will be on top in Rio and Tokyo and these guys are really fine Finn sailors. I think they are going to have great racing. It's a fantastic racing area.”

The President of the RCNV, Julian Vico (ESP), replied, “For me it is a great pleasure for us to host the competition of an Olympic class. You are here to compete is this great challenge in Valencia's waters. All of your struggle on the water is supported by the organisation and volunteers to make the event possible. I hope everything goes well and I wish you a great competition.”

Last year's winner Anders Pedersen (NOR) is now too old and the only other sailor here to have won the title before is Arkadiy Kistanov (RUS), one of the main favourites to take the title this year. He last won in 2011 and was a very close runner-up to Pedersen last year. He recently won the Junior European title in Split, Croatia and is definitely the one to watch.

How confident is he ahead of this year’s event? “I am looking forward and feel good about this event. I have spent a lot of time sailing in Valencia, but I haven't been here in summer. It will be hot and there will be sea breeze of 12 knots and more. There will be a lot of good guys, but I hope I will can show some good sailing in Valencia. I have trained hard and I'm ready.”

Some of those here have come straight from Kiel Week. Stig Steinfurth (DEN) overcame the other juniors and most of the seniors there to place second overall.

Lars Johan Brodtkorp (NOR) and Max Koklhoff (GER) both won races, while Philip Kasueske (GER) also performed well to place sixth overall. Other top performers are likely to come from Nenad Bugarin (CRO), the bronze medalist from last year and who has been fast in training, Anatoly Korshikov (RUS), Ondrej Teply (CZE), and Mikolaj Lahn (POL), who was fourth last year.

Steinfurth was confident after his Kiel success, even though this is his first time in Valencia, “I am always going for the win, but I know there are a lot of good young guys here. I think we have a strong group here from Denmark, and also we use other Danish Finn sailors as coaches so we have a good group of experienced sailors.” He mentioned the London silver medalist Jonas Høgh-Christensen (DEN) as an example. “He was back in Mallorca, and he was really good, explaining things to us as we came of the water, so for me it's been really good for my development, and also for the group.”

The Americas are well represented with two Canadians, Kyle Martin (CAN) and Riley

Finch (CAN) back for a second year and joined by Luke Muller (USA). There are also two from Argentina, Santiago Falasca (ARG) and Facundo Olezza (ARG), who both train as part of the Dinghy Academy and are perhaps more finely tuned to the local conditions than many here.

Bugarin was also optimistic about his chances after placing third last year. “We have been training hard during the winter so I improved a lot, so I hope it will be a few steps up. It looks like we will ave the dame conditions every day, so it will be a nice regatta with nice conditions. I expect some great sailing here.” On his strengths he said, “First of all speed, I have great speed, so I think that that is the most important thing, so after that we will see what will happen.”

A Rule 42 clinic was held over the past three days, which was attended by up to 20 sailors and coaches. Four on-the-water sessions were followed by video debriefings each evening. The assembled footage will be edited and added to the Finn Class Rule 42 library (www.finnclass.org/racing/learn/rule-42-videos) in the coming weeks.

The practice race for the Silver Cup is scheduled for Monday afternoon followed by the first two races on Tuesday at 13.00. Two races are scheduled each day until Saturday July 4th with the final race on Sunday July 5th.