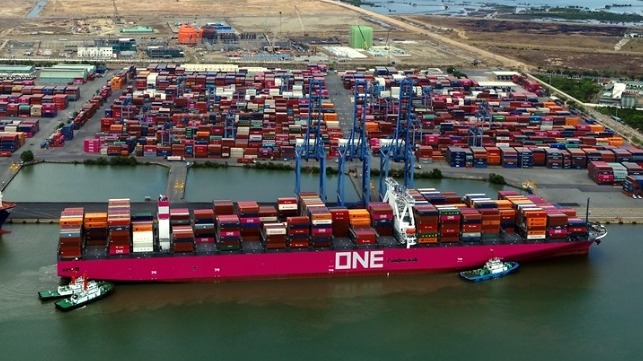 ONE Apus during her maiden call to Vietnam in 2019 - Tan Cang – Cai Mep International Co.

Yesterday, NYK Shipmanagement reported on behalf of Chidori Ship Holding that the 138,611 DWT vessel had suffered container collapse mid-Pacific during a voyage from Yantian, China bound for Long Beach, California. The Apus, which is operated as part of the Ocean Network Express (ONE), was approximately 1,600 nautical miles northwest of Hawaii when it encountered a violent storm cell that produced gale-force winds and large swells. The vessel rolled heavily in the storm resulting in the container collapse.

They reported that the Apus had diverted from its course and today confirmed that as AIS data showed yesterday that the ship has reversed course heading in a westerly direction. The managers said that they were seeking “a suitable port to right unstable containers, assess any damages, and determine the exact numbers of containers lost.” The AIS data now indicates that the Apus is heading towards Yokohama due to arrive on December 7, while yesterday it indicated Kobe.

“Our focus remains on getting the ship to a safe port to ensure the ongoing safety of the crew, the vessel, and the cargo on board,” the companies said in their statement. They also reported that a notification was sent to the JRCC in Honolulu and Guam with maritime navigational warnings subsequently broadcast. They continue to promise that full investigation will be conducted into the incident.

The Apus is a new containership having been delivered in April of 2019 as the sixth in a series of seven ships being built for ONE at the Kure Shipyard of Japan Marine United Corporation. Measuring 1,194 feet in length, she employs a hull form that minimizes the engine-room space to improve cargo-loading efficiency and the latest safety and navigational technology.

This incident is the second recent container collapse experienced aboard one of the vessels of the network. On October 30, a sister ship, the ONE Aquila also suffered a collapse during heavy weather in the Pacific. The company did not announce the number of containers lost or damaged, but that vessel diverted to Tacoma, Washington, where she spent nearly a week undergoing a survey and offloading damaged boxes before proceeding to Long Beach.

A loss or damage of nearly 2,000 containers would rank among the largest incidents the industry has experienced without the loss of a vessel. The World Shipping Council in its 2020 report on containers lost at sea said the yearly total was declining. In the most recent three-year period, they reported the average was 779 containers lost, down by nearly half from the average of 1,390 lost in the three prior years.  Among the most significant incidents was 4,293 containers in 2013 when the MOL Comfort was lost and approximately 900 containers in 2011 when the Rena grounded.

Weather is considered to be one of the most frequent factors contributing to container damage or loss overboard during a voyage.

Additional details and the first pictures have emerged of the container collapse on the boxship ONE Apus in the Pacific. The full extent of the loss remains uncertain as it is too dangerous for the crew to enter the area while the ship remains at sea.

The container ship’s owners, Chidori Ship Holding, and managers NYK Shipmanagement provided a few additional details about the collapse and the current situation while cautioning that the priority at this time remains on getting the vessel and its crew safely to port. They are reporting that the Apus is proceeding “cautiously” toward Kobe, Japan with a current ETA on December 8.

The first images of the collapse are also appearing on social media coming from one of the crewmembers aboard. The companies have not released any official photos. The image circulating shows seven or eight bays collapsed with some containers hanging over the side of the vessel. It is apparently in the mid-ship region as undamaged stacks can be seen beyond the area of the collapse.

The companies also issued a slight revision to their prior estimates, saying that the lost and damaged containers are approximately 1,816 boxes, down from a prior estimate of more than 1,900. However, the estimate on the number of dangerous goods containers has been increased to 64 of the boxes.

It remains unclear how many containers fell overboard during the collapse which happened on the night of November 30 approximately 1,600 nautical miles northwest of Hawaii. A large number of unstable containers also presents the risk of additional losses before the vessel reaches port.

The U.S. Coast Guard in Hawaii issued a precautionary warning to mariners due to the uncertainty of the situation. The companies said that a notification had been sent to the JRCC in Honolulu and Guam and that they continue to work with the JRCC in Honolulu. So far, there have been no reported sightings of the lost containers and it is uncertain how many may remain afloat after the accident.

“Once berthed, it’s expected to take some time to offload the dislodged containers that remain on board,” the companies said in their statement. “Then, a thorough assessment will be made on the exact number and type of containers that have been lost or damaged.”

The incident, which continues to have the potential to be the single largest loss by a container vessel that was not a casualty, is reported to have occurred in seas that were running 5 to 6 meters (16 to 19 feet) with winds at Force 4 on the Beaufort scale, which is termed a “moderate breeze” at speeds of 13 to 18 mph.

“Once the ONE Apus is in port and deemed safe, a full investigation will be conducted into this incident in conjunction with the Flag State and the relevant maritime authorities,” the companies said. The root cause analysis and investigation will look at all aspects of the situation, including the vessel’s routing, loading, equipment, and fitness for purpose in extreme weather.