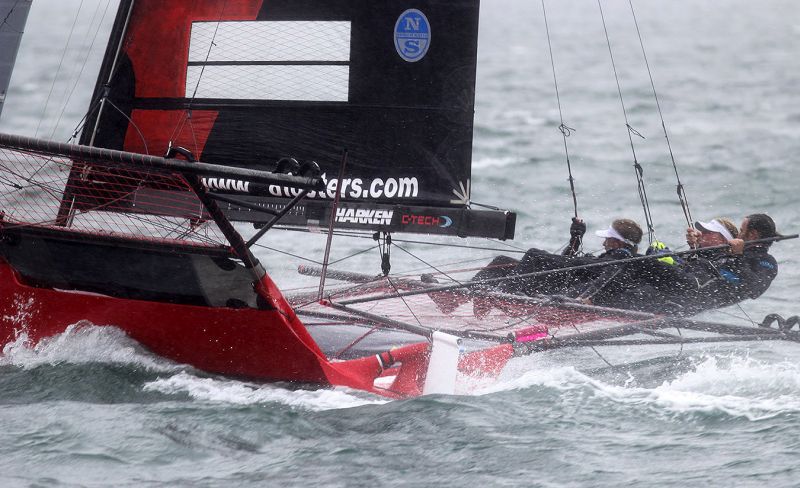 26/10/2020
The Australian champion tech2 team of Jack Macartney, Charlie Wyatt and Lewis Brake mastered the 25-knot Southerly wind, which battered the 18ft Skiff fleet, to score a brilliant victory in Race 1 of the Australian 18 Footers League Club Championship on Sydney Harbour today.
After trailing the early leader Winning Group (Will Phillips, Seve Jarvin, Sam Phillips) over the first two legs of the course, tech2 took control of the race before crossing the finish line in what may be record time for the long Southerly course.
Winning Group capsized while tacking on the windward leg into Rose Bay but the talented young crew recovered well to finish the race in second place, 4m20s behind the winner.
With tech2 dominating the race, there was great interest in the battle for the next four placings. The Oak Double Bay-4 Pines (Aron Everett, Courtney Mahar, Charlie Gundy) challenged Winning Group, for second place, over the final lap of the course, but had to be satisfied with third placing 19s behind Winning Group.
Smeg, skippered by former Giltinan world champion Michael Coxon, tacked soon after the start and was pressing strongly for the lead as the fleet approached the first windward mark off Clark Island before the team suffered the first of three capsizes during the race.
Winning Group led Bird & Bear (Tom Clout), Noakesailing (Sean Langman) and Andoo (Marcus Ashley-Jones) as the fleet 'took-off' on a long, wild spinnaker run from Clark Island to Obelisk Bay. tech2 had gybed earlier in the run and gained on the leader as the fleet raced at top speed ahead of the 25-knot Southerly wind.
After Winning Group capsized in Rose Bay on the first lap of the course, Shaw & Partners Financial Services (Dave O'Connor) grabbed second place just ahead of Bird & Bear, followed by The Oak Double Bay-4Pines, Finport Finance (Keagan York), the recovering Winning Group and appliancesonline.com.au (Simon Nearn).
Over the next lap of the course the race amongst this group was absorbing and exciting as the placings changed regularly in the tough conditions. The second spinnaker run from Clark Island to Obelisk Bay was just as brilliant as the first as the skiffs still left afloat were 'flying'.
Winning Group's recovery had been impressive as the team narrowly took second place away from The Oak Double Bay-4 Pines at the Shark Island mark in Rose Bay. Bird & Bear's jib carried away and the skiff was forced to retire. Finport Finance came home in fourth place, followed by Shaw & Partners Financial Services and Andoo.
Race 4 of the Spring Championship series will be conducted next Sunday, November 1.
Spectators can follow the racing on board the club's spectator ferry, however due to the COVID-19 policy, numbers are limited. Booking online through the club's website www.18footers.com is essential. https://www.18footers.com.au/18-footers-sailing/spectator-ferry/
For those unable to make it out onto the water, AeroMedia Live Broadcast team will be on Sydney Harbour to capture all the action.  Live streaming is available at www.18footers.com by clicking on the '18 Footers TV' link.
– Frank Quealey, Australian 18 Footers League