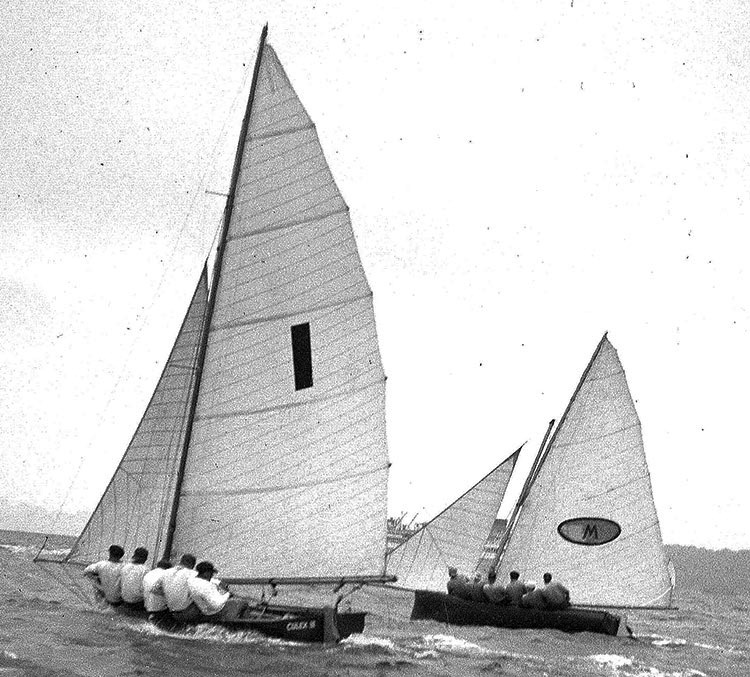 With the Brisbane 18 Footers’ Sailing Club celebrating its 100th Anniversary in 2020, it's a good time to reflect on the ‘golden days’ of Queensland’s 18 Footer racing when they made such a significant contribution to the development and achievements in the sport.

Queensland 18 Footer designers, boat builders and sailors won more Australian Championships than NSW teams had done up until the late 1950s.  The result of their ideas and innovations not only changed the style of the boats, but also shaped the future of Sydney 18 Footer racing forever.

A big statement, but one that is difficult to deny.

From the first official Australian Championship in 1912-1913 Season, Queensland competitors won 20 of the first 35 championships staged up to, and including, the 1957-1958 regatta.

Since Mark Foy’s original event in January 1892, there was little, or no change during the Big Boat Era, which lasted until the 1930s, but what followed in the first half of the decade is what changed the future of the Sydney 18 Footer racing scene.

Things began to change in the early 1930s when the fleet in Brisbane began to dwindle as boat owners were reluctant to replace old boats with new ones, due to the rising costs and the difficulty of maintaining the large number of crew members required to sail them.

Queensland designers began applying the principles of aerodynamics to boat building which resulted in a radical new type of 18-Footer.  The new boat, Aberdare, was a no heel skiff with a 7ft beam and depth of 2ft.  She had a lighter hull and smaller rig and carried a crew of 7-8 men, compared to the 12-13 needed in the big boats.

Off the wind, Aberdare produced great speed with mainsail, reaching jib, ringtail and peak head spinnaker, and was so fast that she was soon christened “the Galloping Ghost.”  Skippered by Vic Vaughan, Aberdare won four consecutive Australian Championships between 1933-1934 and 1936-1937, and was a dominating figure in 18-Footer racing.

The success of the new concept was the beginning of the end for the ‘big boats’ but when the Sydney club (Sydney Flying Squadron) refused to register the new narrow beam boats for their local sailors, a group of those wanting the new boats formed their own club, which was originally known as the NSW 18 Footers Sailing League (now known as the Australian 18 Footers League).

That was when the future of Sydney 18 Footer racing changed forever.

Queensland started to rebuild its fleet after WW2, and in 1945 decided to race 6ft beam boats.  This time the roles of the two Sydney clubs were reversed.  The League opposed the move, but it was approved by the SFS.  The first of these 6ft beamers, which were designed by Norman Wright and Lance Watts, began to sail in Brisbane in 1946.

These boats were cheaper to build, lighter than the previous 7ft beam boats, needed only a crew of 5-6 compared to 7 or 8, and they were fast.

Eventually, all three of the major Australian 18-Footer clubs got back together but most of the new ideas and top championship contenders were coming from the designs and sheds of people such as Lance and Harold Watts and Norman Wright.

Wright saw the advantages of the ideas used on New Zealand’s Giltinan champion Intrigue and used them when he built Jenny VI, which was a 3-layer, moulded hull.  Jenny VI became Queensland’s first Giltinan champion in 1956.

Chine hulls were approved and in 1959 Norman Wright designed the first new 3-handed boat.  The new boat was banned in Sydney but was permitted to compete in both international and interstate contests.

The Brisbane club wanted to build its fleet and asked Norman Wright to design a cheap, easy to build 18.  Bob Miller (later known as Ben Lexcen) had a sail loft in the Wright shed and a joint effort with Wright produced a totally new design.

The new boat, Taipan, was a light ply chine, two-thirds decked, with large genoa, inboard rig, no bowsprit, smaller sail area, designed for a crew of three with two on trapeze.  She also had heavily flared topsides and had a narrow 4ft 3in beam on the chine.  Taipan had a smaller rig (similar to one used on a Flying Dutchman class boat) and bending spars.

Taipan immediately created dramas when Miller took the boat to Auckland for the 1960 Giltinan Championship.  The skiff was decked far in excess of the allowable area of that time so Miller was forced to do a major reconstruction job prior to the start of the regatta, which reduced the deck by around fifty per cent.  Taipan became vulnerable in choppy conditions and finished only fourth, which included two non-finishes.

Despite the problems experienced at Auckland, there was little doubt about the design so Miller again teamed up with Wright to build an improved version which was lighter and stronger.  The new boat was named Venom.

There had been no change to the rules of that time.  NSW clubs continued their ban of this type of boat, despite it was still permitted to compete at an international level.  When Venom contested the 1961 Giltinan world Championship, she dominated the racing and easily won the series, but sadly it was the final big impact the Queenslanders have had on the 18s.

Neville Buckley, a two-time Australian 16-footer champion, won six-consecutive Queensland Championships in TraveLodge-Queensland and was competitive in the very strong international fleet of the 1970s, but Bob Miller’s Venom, in 1961, still remains the last Queensland winner at Australian or international level.

Now David Hayter, a four-times Australian International 14ft Skiff champion, is leading a group of young sailors determined to get a Queensland name back on a championship winner’s list.

As long as there is no Covid 19 border restriction between NSW and Queensland, the Australian 18 Footers League will support a one-off regatta to be sailed in Brisbane on 3-4 October.