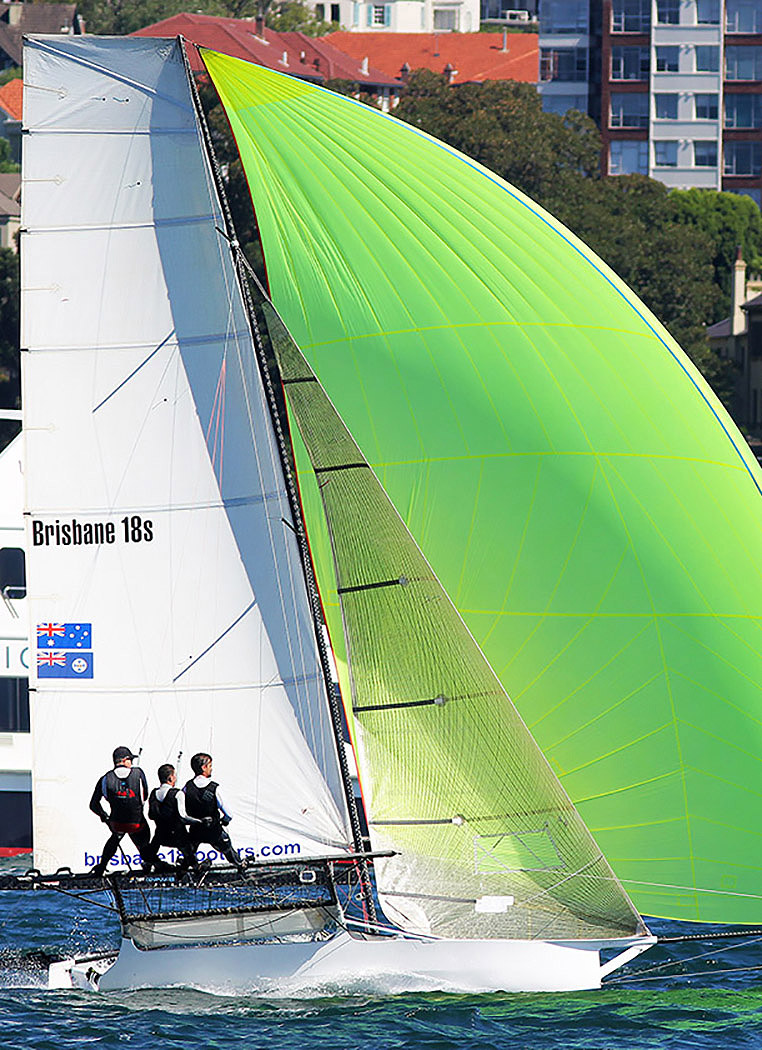 Dave Hayter at the 2019 JJs on Sydney Harbour.J

Will the three-boat Queensland team of young sailors coming to the 2020 JJ Giltinan 18ft Skiff Championship on Sydney Harbour next month (14-22 March), lead to a stronger challenge by the northern Australian State’s once mighty record of development and controversial design during the early history of the class?

The young team is relatively inexperienced in 18ft Skiff racing and will obviously have a hard time beating the best teams in the world but their effort and enthusiasm in the lead up to the championship must be admired.

According to Brisbane Club Vice-Commodore Steven Tapsall, a former leading 18ft Skiff sailor with Robbie Lea in the 1990s: “It’s a conservative start but we have a young group with talent and enthusiasm.  Their love of speed and racing is on display most weekends and they often have midweek training sessions to build up their skills.”

The Brisbane 18s rebirth story really began two years ago when Steven Tapsall, Paul O’Malley Jones, Richard Billett and Ben Guymer were keen to nurture high performance skiff classes in Brisbane and saw significant young talent leaving sailing after their development period in the érs and other feeder classes.  They wanted to get the 18s on the water so their kids and others could aspire to sail something, big, fast and exciting.

According to Dave: “I was keen to do a JJs last year, so Elliott Mahar and I hatched a plan, found a third (Alex Watson, who is now running his own boat), washed the dust off the boats, that had been sitting in the shed for about 5 years, and worked out what went with what and what needed to go in the bin.”

“With the club’s approval, we picked the best gear we could find and put the package together for last year’s JJs.  It was a huge learning curve and great fun.  The club supported us all the way and other teams started to become interested.”

“The second boat hit the water at the start of this season with Alex Watson on the helm, Ben Roxburgh in the front and Cooper Richmond on sheet. Their boat needed some TLC but came together quickly, while the third team wasn’t so fortunate.  The boat had been stripped of anything that looked good enough to use so Matt Rogers, Darren Rogers and Steve Wilson had their work cut out.”

“The club then came to their aid with the purchase of new fittings and equipment, but the time was all theirs.  They worked tirelessly to re-build the boat, I put the centreboard box back in and then we had three serviceable boats on the water.”

“We put a three year plan together to upgrade our gear, which started with a new #2 rig for my boat and later the purchase of Lumix, and QMC and enough second-hand sails from Sydney to support Alex and Matt’s campaign and to keep all our older boats on the water for a few years to come.”

“It has been a huge effort by the Brisbane 18 Footers club and the sailing group to get our boats ready for the JJs, and as a group we also decided to send one boat to Sydney each week during the Australian Championship as part of the build up to the JJs.”

The Queensland team members for the 2020 JJs have come through a variety of classes into the 18s.

The youth and talent of the team gives us hope of a Queensland revival in the 18s as the State has been such an important ingredient in the 18 Footers history.

Racing began in Brisbane in the mid-1890s before regular interstate contests were held between teams from Queensland, NSW and Western Australia, and the Australian Championship formally established in the 1912-1913 season.

Colin Clark was the most prolific Queensland winner of the official Australian Championship with three victories between 1917-1918 and 1922-1923.  In 1921 the Brisbane 18-Footers Club was also officially formed.

By the early 1930s the fleets in NSW and Queensland began to suffer as owners didn’t want to pay the rising costs necessary to replace the big old boats with new ones, and also found it difficult to maintain the number of crew necessary to sail the big boats.

The boats from the “Big Boat Era” became obsolete when Queensland designers began to apply the principles of aerodynamics to boat building which resulted in a radical new type of 18-Footer.

The new boat, Aberdare was a no heel skiff with a 7ft beam and depth of 2ft.  She had a lighter hull and smaller rig and carried a crew of 7-8 men, compared to the 12-13 needed in the big boats.

Off the wind, Aberdare produced great speed with mainsail, reaching jib, ringtail and peak head spinnaker and was so fast that she was soon christened “the Galloping Ghost” or “the Queensland Miracle”.

Vic Vaughan, having won four consecutive Australian Championships in Aberdare, between 1933-1934 and 1936-1937, was a dominating figure in 18-Footer racing, but no more than Lance Watts, who also won four national titles between 1931 and 1950.

The success of the new concept was the beginning of the end for the ‘big boats’ but when the Sydney club refused to register the new narrow beam boats for their local sailors, a group of those wanting the new boats formed their own club, which was originally known as the NSW 18 Footers Sailing League (now known as the Australian 18 Footers League).

Queensland started to rebuild its fleet after WW2, and in 1945 decided to race 6ft beam boats.  This time the League opposed the move, but it was approved by the SFS.  The first of these 6ft beamers, which were designed by Norman Wright and Lance Watts, began to sail in Brisbane in 1946.

These boats were cheaper to build, lighter than the previous 7ft beam boats, needed only a crew of 5-6 compared to 7 or 8, and they were fast.

Eventually, all three of the major Australian 18-Footer clubs got back together but most of the new ideas and top championship contenders were coming from the designs and sheds of people such as Lance and Harold Watts and Norman Wright.

Wright witnessed the advantages of the ideas used on Intrigue and used them when he built Jenny VI, a 3-layer, moulded hull, which became Queensland’s first Giltinan world champion in 1956.

Chine hulls were approved and in 1959 Norman Wright designed the first new 3-handed boat.  The new boat was banned in Sydney but was permitted to compete in both international and interstate contests.

Once again, the Brisbane club wanted to build its fleet and asked Norman Wright to design a cheap, easy to build 18.  Bob Miller (later known as Ben Lexcen) had a sail loft in the Wright shed and a joint effort with Wright produced a totally new design.

The new boat, Taipan, was a light ply chine, two-thirds decked, with large genoa, inboard rig, no bowsprit, smaller sail area, designed for a crew of three with two on trapeze.  She also had heavily flared topsides and had a narrow 4ft 3in beam on the chine.

Taipan had a smaller rig (similar to one used on a Flying Dutchman class boat) and bending spars. Miller referred to her as a supercharged FD.

Taipan immediately created dramas when Miller took the boat to Auckland for the 1960 Giltinan world Championship.

Because the skiff was decked far in excess of the allowable area of that time, Miller was forced to do a major reconstruction job prior to the start of the regatta which reduced the deck by around fifty per cent.  Taipan became vulnerable in choppy conditions and finished only fourth, which included two non-finishes.

Despite the problems experienced by Miller at Auckland, there was little doubt about the design and Miller again teamed up with Wright to build an improved version which was lighter and stronger.

The new boat was named Venom.

There had been no change to the rules of that time.  NSW continued its ban of this type of boat despite it was still permitted to compete at an international level.

When Venom contested the 1961 Giltinan world Championship, she dominated the racing and easily won the series, but sadly it was the final big impact the Queenslanders have had on the 18s.

Sam Elms Jr. won three Queensland titles in the early 1970s before Neville Buckley, a two-time Australian 16-footer champion, began a six-consecutive run from 1973-1978 (incl) in Travelodge-Queensland.  Doug Trott took over the Travelodge sponsorship on Buckley’s retirement and won the title in 1978-1979 in a skiff named Park Royal.

Another strong competitor in the 1980s was David Lambourne, in skiffs which raced as Skreenkraft, but it wasn’t until 1989-1990 that David won the first of his two Queensland Championships.

In the mid-1990s, a co-ordinated program saw new sponsors such as Bank of Queensland, Optus World, Bundaberg Rum and Hope Island Gold Coast introduced to the local fleet and some talented young sailors organized to sail the skiffs.

There have been a few individual teams entered in the JJ Giltinan Championship by Queensland in recent years but there is a definite feel that this latest group of young sailing talent is prepared to do the hard work required to get their state back into the competitive zone.

The Queensland team for the 2020 JJ Giltinan 18ft Skiff Championship is: