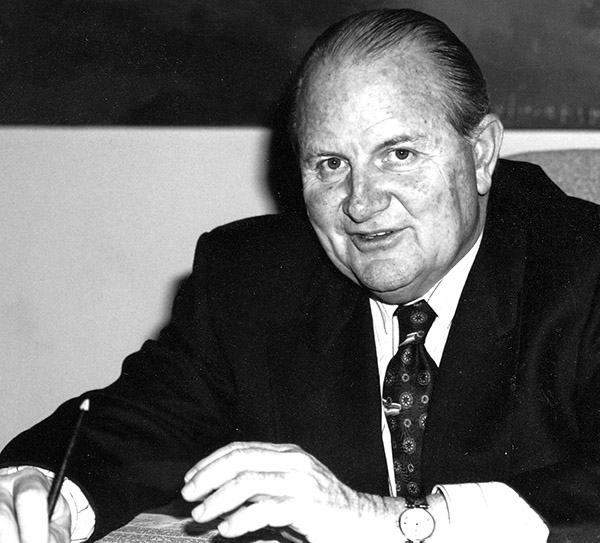 Mr. Patrick Corrigan, AM is an Australian businessman, focused mainly in the freight industry, an art collector, jazz enthusiast and philanthropist, who was awarded the Member of the Order of Australia medal in the 2000 Queen’s Birthday Honours List.

His first involvement came in 1969 when he sponsored Vic Robinson, in Corrigans Express, at the 1969 JJ Giltinan world Championship.  It was a time when fleet numbers and development to maintain the high standards in the 18s, was heavily dependent on the sponsorship dollars from corporations and individuals.

It had been just four years since TraveLodge Hotels and became the first big sponsorship in the class.

Patrick’s support continued with another skiff for Vic Robinson in the early 1970s.  He then added Express Livestock (for a young up-and-coming team) to a two-boat sponsorship program.

His wonderful support of 18ft Skiff Racing continued throughout the 1970s with a series of Mitchell Cotts Freight skiffs for a variety of skippers, before the next stage of his sponsorship history came in the 1980s when he sponsored John (Woody) Winning in the Mitchell Cotts skiff.

As costs rose dramatically during the early part of the 1980s, Patrick was obviously pressed to continue his sponsorship at a high level but showed his business skill when he came up with a multi-sponsor combination of individual corporations in his quest to win a JJ Giltinan world Championship.

His boat raced as Southern Cross with the logos of all individual sponsors featured on the mainsails and spinnakers.  Robert Brown was the skipper and the boat contested the 1988 Giltinan regatta on Sydney Harbour.

A complicated rule had been introduced for the 1987-1988 Season, which related to what was declared a new or previously used sail.  The intent was to try and restrict escalating costs in the sport as fleets were dwindling.

Unfortunately, the rules created confusion and a controversial protest was lodged which led to a decision to declare Southern Cross and Chesty Bond (Trevor Barnabas) joint champions.

Patrick was never really satisfied with the ‘shared’ victory and continued his sponsorship support of young sailors during the early 1990s in an attempt to win the championship outright.

David Witt and Anthony Young went close to giving Patrick the outright victory he wanted so badly, but it wasn’t until Stephen Quigley skippered AEI-Pace Express in 1996 before Patrick finally achieved his goal of winning the JJ Giltinan world 18ft Skiff Championship outright.

Having achieved his goal, was it time for Patrick to pull the pin? No way, he was a true, loyal supporter of 18ft Skiff Racing and continued to sponsor people like US champion Howie Hamlin, Emery Worldwide, into the early 2000s.

So why did Patrick continue to sponsor 18ft Skiffs for more than 30 years?  His simple answer, “It’s a three letter word – FUN.

“I sponsor a number of different things in sport as well as the arts.  The reason I do it is simple, I like to have fun.

“I’ve always had fun sponsoring the 18s and enjoyed watching the skiffs.  It was also a good way to give the company’s staff an interest outside the day-to-day workplace.”

Sponsorship has always been a great way for corporations and smaller companies to show their colours on Sydney Harbour, entertain business associates and boost staff morale as Patrick did for more than 30 years.