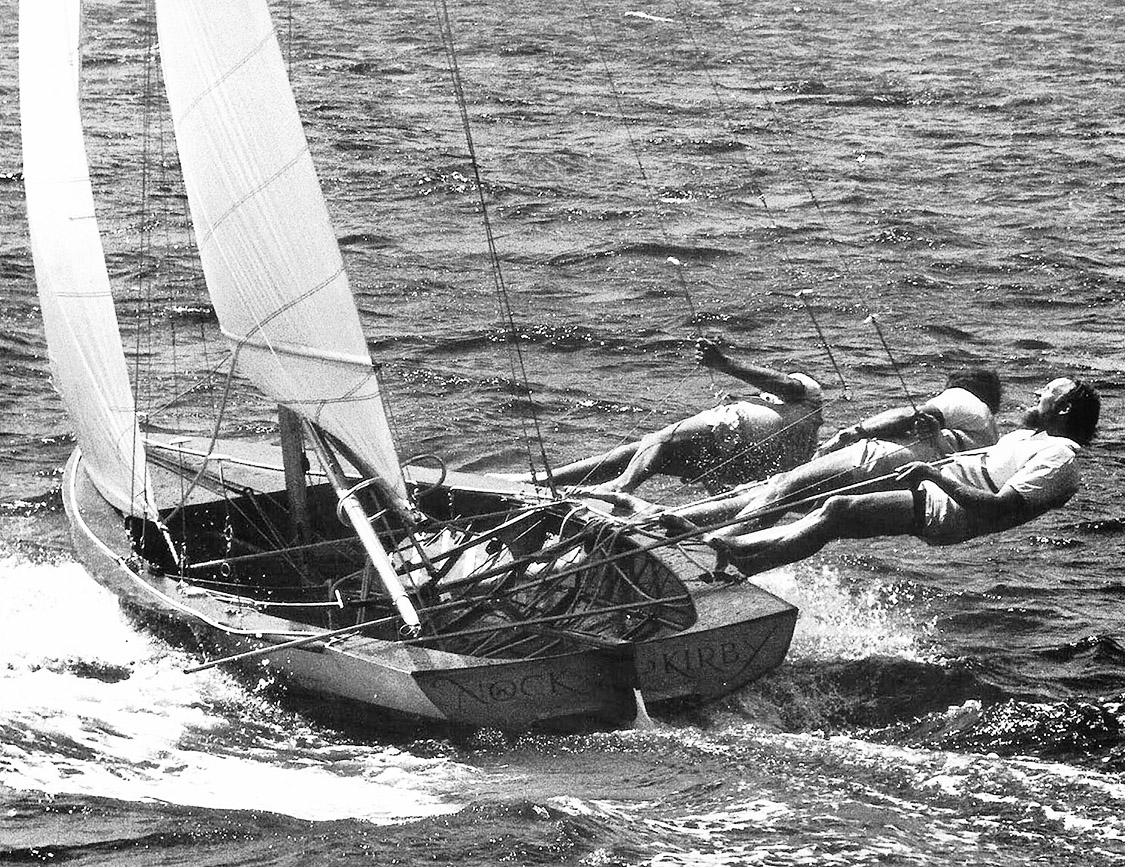 John ‘Steamer’ Stanley is the person to go to for historical information and photographic images regarding the 18 Footers, now it’s time to take a look at John’s own history when it comes to all things 18ft Skiff sailing and yachting.

John arrived in Sydney (from Queensland) as a six-year-old.  After his parents bought a house at Seaforth and became social members at Middle Harbour Skiff Club, John used to sit on the beach and watch the boats go racing, and he “wanted to play the game”.

His first sail on a 16 Footer was with Jim O’Rourke, a former Australian 16 Footer champion.  John remembers, “It was a 30-knot westerly. I was the bailer boy and I think I bailed Middle Harbour twice that day, and I loved it.”

After sailing in the B-class fleet, John became the light weather fourth-hand with Eddy Kirk and finished second in Pamela IV at the 1962-1963 Australian 16 Footer Championship.

The following season, Ken Beashel asked John to become his light weather hand on Elvina Bay, which went on to finish third in the 1963-1964 Australian Championship at Perth.

With some of the greatest names ever in the 16s at that time, John has very fond memories of his experience.  “I was lucky to sail with some of the best competitors the club ever had.  Next step was to move from the 16s to the 18, and I wanted to be the best forward hand going around.

“Rod Zemanek asked me to sail on his 18 Footer Minamit in 1967-1968, then the following year we moved into the 18s on a brand new skiff named Willie B, which was the first 18 to sail four on the wire. We were runner-up in both the 1969 and 1970 Giltinan championships but won the 1969-1970 Australian Championship on the Brisbane River.”

At the 1969 Giltinan Championship, Willie B and TraveLodge were tied after the five regular races and the first sail-off in the championship's history was required to decide the champion. It was a controversial regatta, particularly as a protest against the Race 3 winner, Willie B, was the reason for the sail-off.

John remembers, “In Race 3 TraveLodge led Willie B around the top mark, and while setting the spinnaker the end of the boom clipped the trapeze wire of Bruce Farr’s Guinness Lady which was sailing under us up to the top mark. We went on to win the race and Bruce and his crew congratulated us on our win, but when the TraveLodge manager heard of the incident he lodged a 3rd party protest late in the night. Our skipper, Rod Zemanek refused to go to protest and we were disqualified.

“We still finished equal on points at the end of the title, so we had to contest a sail-off against TraveLodge.  We were leading on the last run to the finish, against the tide, before TraveLodge set a huge spinnaker and ran us down just before the finish.”

After the two seasons on Willie B, John said, “I heard Dave Porter was getting an 18 Footer for the 1970-1971 season so I rang him and asked if he wanted a forward hand. He said he would ring me back. He did, and said yes.”

Ian Perdriau built a beautiful-looking boat, which raced as Aussie. John recalls “the boat was a rocket ship and we won the NSW State title. Unfortunately, that season was the last which had a rule that when the top of the mast hit the water you were ruled out.  It cost us both the Australian and Giltinan championships.”

The following season (1971-1972), John moved on to join Denis Lehany and Ian Perdriau on a new boat, which was named Electric Indian.

According to John, “Graham Nock had previously sponsored Denis and asked if he could sponsor the new boat. The boat was then re-named Nock & Kirby and we won the Australian Championship on the Brisbane River, but on Waterloo Bay, Don Lidgard's Smirnoff, which was the first boat to gybe downwind, was too good.”

John ‘Woody’ Winning won the 1974-1975 Inter-dominion 12ft Skiff Championship and moved into the 18s the following season, with sponsorship backing from TraveLodge. John Stanley joined ‘Woody’ but, when neither one had the time necessary to do justice to a top campaign, ‘Steamer’ decided to leave the team after only a few weeks.

‘Steamer’ had already done some sailing on the bigger boats, and after the short time on Travelodge concentrated all his efforts to a variety of classes and high-profile events.

In 1976, John joined Bruce Ritchie in the Etchell class and won the Australian Championship, which gave the team a trip to contest the world title in Newport, Rhode Island, where they finished in third place.

Following that event, John says, “I flew to San Francisco for The Big Boat Series and won on Ballyhoo.”

Over the next year it was 'all-go' for John. He sailed on Ragamuffin III and competed in the Admirals Cup in England, then joined Tom Stephenson on the One Tonner B195, which won the Australian Championship.

The 1977 world E22 championship was going to be sailed off Palm Beach (Sydney) so John talked Frank Tolhurst into buying an Etchells 22. Along with Norm Hyett, the trio won the championship and became the first Australian crew to win the world title.

John recalls, “Unfortunately Norm Hyett and I couldn't go with Frank Tolhurst to defend the E22 title as we were putting Big Schott (Two Tonner) together for the first Pan Am Clipper Cup, which the Australian team won.”

Next, he joined Hugh Treharne's Quarter Tonner Seaply and won the Australian Championship. The team then went to Japan where they finished third in the world title.

John's incredible racing career continued as he said, “In 1980 I was invited to try out as crew for the America's Cup with Jim Hardy and Ben Lexcen, a great experience with Ben and the bendy mast.” Then in 1982 “I sailed on the One Tonner White Pointer in the first Sydney to Coffs Harbour race and we won the double.”

We are extremely fortunate to have John Stanley as an historian in the 18 Footers, so I just had to ask him what drives him so much, his reply, “I enjoy researching the 18 footer history and have been given some wonderful material and trophies over the years.  I believe that if you don’t know where you’ve been, you will never know where you’re going.”