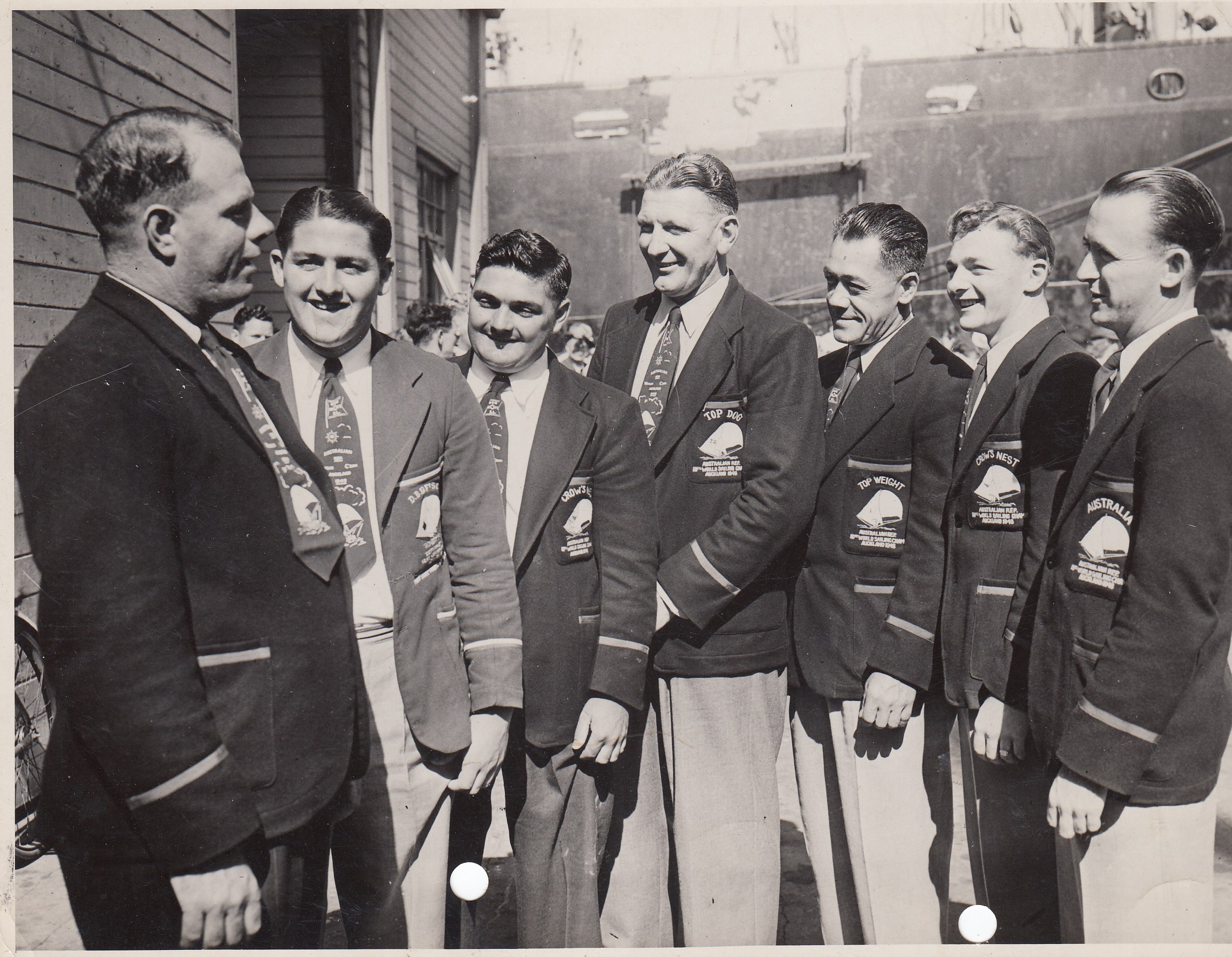 1948 Australian 18 Footer team to New Zealand. The tall man in the middle was Joe Pearch who also represented Australia in Rugby League.

Since January 1938, the JJ Giltinan 18ft Skiff Championship has been regarded as the world championship for all 18 Footer Racing and the names on the James J Giltinan Trophy include some of the greatest sailors in the world.

While most sailing enthusiasts know the men whose names are recorded as winners of the championship, not many will know about the man after whom the trophy was named – James Joseph Giltinan.

Mr. Giltinan was a sports enthusiast, promoter and administrator who came to prominence in Australia in the early 1900s when he was heavily involved with the establishment of Rugby League, and is regarded as the game’s founding father in Australia.

Determined to introduce the sport into Australia, the promoter/administrator became very active and he organised meetings with politicians and businessmen to set his plan in motion.

The breakaway from Rugby Union was aimed at finding a better deal for players and perhaps a better game, more suited to the style of Australia’s early explorers.

Despite the threat of life disqualification by Rugby Union, and the possibility of losing their jobs, many players signed to the new game in August 1907.

Even though the risk factor was high, Giltinan and two of his associates took a horse-drawn cab from the city to Double Bay, where they spoke to Mrs. Annie Messenger, mother of the great Rugby Union player of his time, Dally Messenger.

With Mrs. Messenger’s approval, the great Dally Messenger signed to play the new game. It remains one of the great all-time coups of Australian sport.

In less than seven months, the Sydney Rugby League premiership was up and running. Within twelve months, the first interstate match had been played and the first Kangaroos (Australian team) were off to England.

During the first half of the 20th century, there was a ‘natural’ association between Rugby League and the 18 Footers with many winter battles on the football fields being transferred to Sydney Harbour during the summer months.

When a major split developed in the 18 Footer ranks, and the NSW 18 Footers League (now known as Australian 18 Footers League) was formed, Mr. Giltinan was back in Double Bay once again. This time as President of the new organisation.

His entrepreneurial skills were soon evident. He was determined to “promote international competition” and the JJ Giltinan Trophy for World 18 Footer Championship was created as a symbol of supremacy of 18 Footer racing.

The first World 18ft Skiff Championship, for the JJ Giltinan Trophy, was staged on Sydney Harbour in 1938.

The first day’s racing, according to the League’s 27 January 1938 programme, “Eight steamers (ferries) were there to carry the crowds, and everything was set for the greatest conglomeration of sailing enthusiasts ever to follow a race.

“In response to the League’s efforts to promote a world’s sailing championship, the crowd thronged to the wharves, and it was estimated 8,000 people saw an epic struggle for the first heat.”

Thank you James Joseph Giltinan for the magnificent legacy you left us to enjoy.