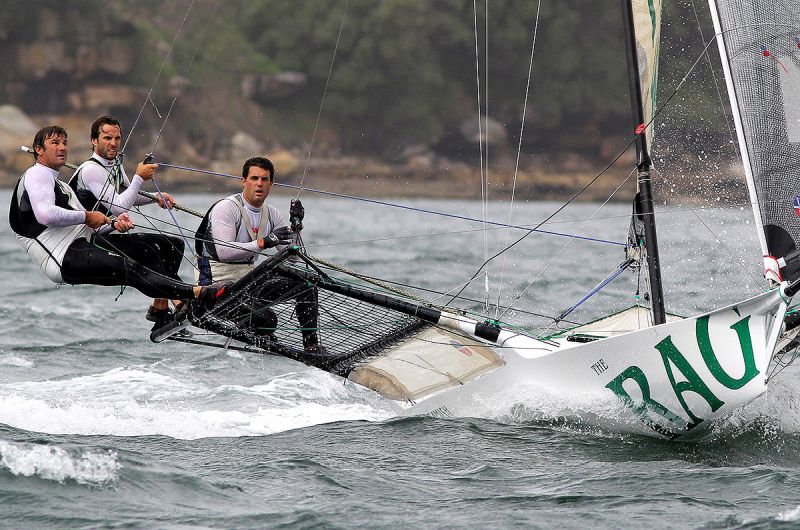 Jack and his 2013 JJ Giltinan team show the concentration and pressure of a tough race.

The current Australian 18ft Skiff champion Jack Macartney will be back with tech2 in the Australian 18 Footers League’s 2020-2021 Season fleet to defend his title and to wipe out the memory of a disappointing JJ Giltinan Championship sailed earlier this year on Sydney Harbour.

Macartney is enthusiastic and has the dedication, a love of sailing and a whole lot of talent necessary to be a winner of major championships, and is determined to erase the memory of the 2020 JJ disappointment.

Jack will again be joined by Charlie Wyatt on the sheet and Lewis Brake, who replaces Trent Barnabas in the bow, for the 2020-2021 Season.

Jack returned to the 18s for the 2019-2020 Season after a two-year break from the class.  With the support of a brand new sponsor to the class, tech2, the team were extremely fast right up to the start of the JJ Giltinan Championship in March.

Macartney’s new tech2 skiff didn't hit the water until early December when the team finished fifth in Race 2 of the NSW Championship.  Despite the late start to the championship, tech2 quickly showed her potential and finished fifth overall in the 18-boat fleet.

The team continued to improve when racing resumed after the mid-season break and consistently strong results gave the team the 2019-2020 Australian Championship as well as the League's Club Championship.

After another outstanding victory in a perfect 12-15 knot North-East wind at the invitation race for the JJs, the tech2 team looked certain to provide a strong challenge to the defending champion Honda Marine team, led by David McDiarmid.

Tech2’s regatta began with a good third placing in Race 1 but a below par result of 9th (following a mid-race capsize) in Race 2 was a blow to the team’s chances and placed pressure on the crew to stay in touch with the leaders.

When the Covid 19 pandemic struck shortly after the start of the regatta it forced officials to quickly restructure the racing program so that the championship could be completed.

Unfortunately, with a necessity to conduct multiple races on consecutive days, it gave little time for the tech2 team to recover and actually compounded the problem.

Day 3 of the championship was conducted over three windward-return courses and produced three different winners in a light South-East breeze.  The day was disastrous to tech2’s championship chances as the team could do no better than 17th and 9th in the first two races.

Tach2 finished the regatta with three good results to give the team a fifth placing overall but the 2020 Giltinan Championship was an anomaly for such a talented team and a much stronger challenge can be expected in the 2021 championship.

Prior to his 'retirement' in 2017, after finishing runner-up to Michael Coxon's Thurlow Fisher Lawyers in the 2017 JJs, Jack had always been a strong competitor with an outstanding record of consistency in a number of Rag & Famish Hotel-sponsored skiffs.

Jack's early record in the 18s also includes another Australian Championship victory when he teamed with skipper Micah Lane and bow-man Drew Waller to win the 2006-2007 title in Macquarie Real Estate.