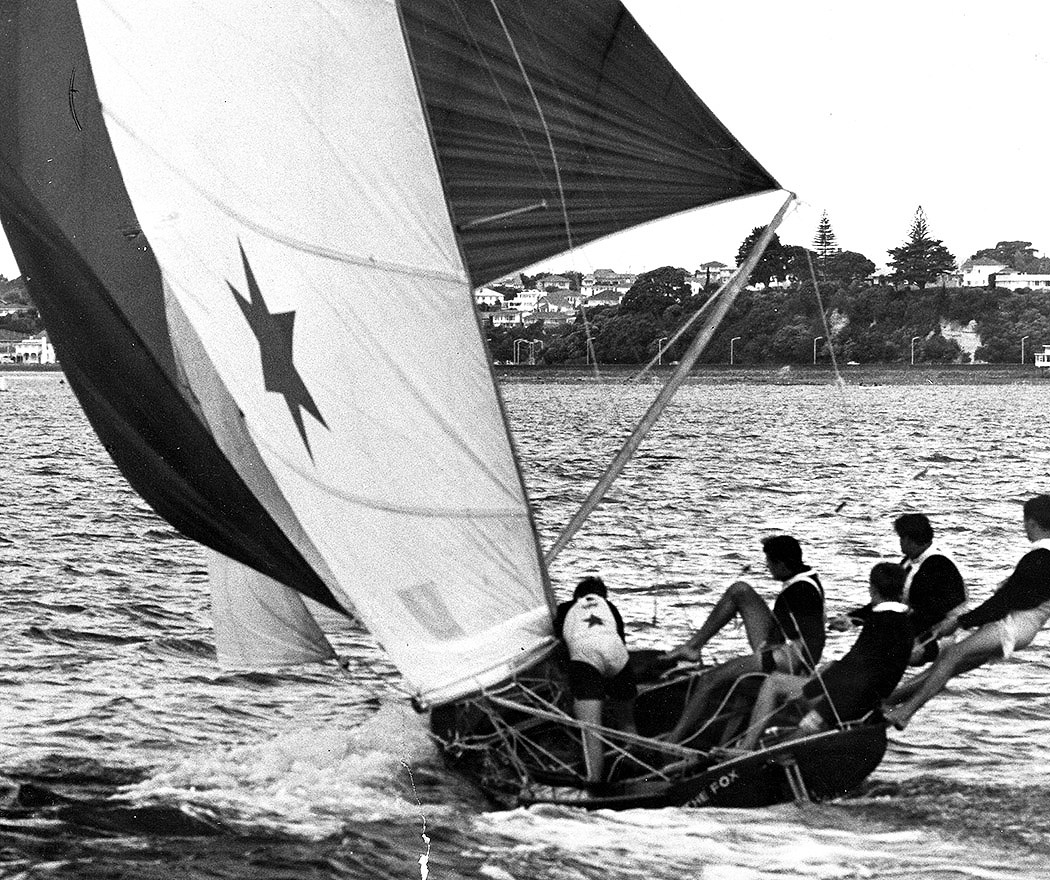 19-year-old Hugh Treharne at the helm of The Fox in the 1963 Giltinan world Championship.

Hugh Treharne is one of Australia’s greatest sailors. He was tactician on the America’s Cup-winning Australia II in 1983, a renowned 16ft and 18ft Skiff sailor, a widely recognised sailmaker and a world champion blue water yachtsman.  In acknowledgement of his marvellous achievements, Hugh was inducted into The Boating Industry Hall of Fame in 2013.

At only 19-years-old, Hugh was approached by Dennis Fox to sail his family’s five handed 18 Footer The Fox.  He teamed with his brothers Ian and David, Kevin Flower and John Longmuir, and finished runner up to Ken Beashel’s Schemer at the 1963 Giltinan world Championship at Auckland in 1963.

Hugh recalls “it was a big learning curve, but a great experience.  During the regatta, we even put loops on the gunwale and I got to sail from the trapeze, which wasn’t common at the time.  In the final race we even tried sailing the boat as a four-hander.”

In 1969, a Sydney radiologist named Dr. Sam Hatfield was interested in owning an 18ft Skiff and wanted to name it to Thomas Cameron to honour a family friend.  One condition was that Sam (a fit and strong 60-year-old) also wanted to be a part of the crew.

Hugh Treharne agreed to the offer and assembled the other crew members, who were mates from the North Harbour Sailing Club.  Kevin Flower, who sailed with Treharne in the 1963 JJ Giltinan World Championship, was the forward hand, and Allan Walker, who had just returned from crewing in the Soling World Championship in Copenhagen, became the main sheet.

Once the crew had been settled, Treharne engaged his long-time friend Hugh Cooke to discuss the design of the new boat.

Cooke, with input from Kevin Flower, decided that the boat would be built along the design of reigning world champion Travelodge, but would be altered by making the bow sections finer, a bit more spring in the waterline and a more pleasing sheer line.  Renowned boat builder Ian Peden, assisted by Ian Perdriau, was engaged to build the boat in a much lighter construction than other 18s of the time.

According to Allan Walker, “the hull was moulded in a double diagonal laminate of fine red cedar on frames of spruce and ash.  The end result was an extremely ‘pretty’ boat, small, very pleasing to the eye and light weight.  Some extra strengthening was added later to reduce ‘flexing’ in the hull, producing a very stiff (and faster) hull.”

“The three rigs were designed embracing knowledge that Hugh had garnered while sailing Flying Dutchman dinghies in Europe and Scandinavia.  The rig set-up enabled controlled bending of the masts, which were rigged to minimise any side bend.  Hugh designed and made all sails in his Blue Peter Sails loft.”

Not long after the christening and launching of Thomas Cameron, it was realised that Sam Hatfield was not experienced enough for the task and he made way for a replacement, Ian Treharne, who became the jib sheet hand.

Allan Walker recalls, “Thomas Cameron immediately showed her potential, particularly after the rigs were raked further aft than the original setup.  An unintentional benefit was that the clew of all jibs, when sheeted, ended up on the deck instead of three or four inches above.  Hugh clearly recalls “how much ‘nicer’ the boat felt and the rakes were never altered again.”

Kevin Flower left the crew suddenly, just prior to the 1970 Giltinan World Championship, which resulted in another crew change.

Walker says, “Phil Croll came on as jib sheet hand and Ian Treharne moved to forward hand.  The rest is history with Thomas Cameron going on to win every subsequent scratch race, except one, when a spinnaker halyard broke during the ‘worlds’.  Even then we finished a close second to Willie B.”

Rodney Pattisson, the English Flying Dutchman Olympic Gold Medalist, took the opportunity to take Thomas Cameron out for a race at the League while he was in Sydney on a short visit, and thoroughly enjoyed himself as he experienced the speed and ease of sailing the ‘fantastic’ boat.

Following a four-year ‘retirement’ from the 18s, Hugh Treharne was contacted by Carl Ryves, on behalf of Norman Booth, to see if he was interested in sailing a new 18 Footer to be sponsored by the Mosman GMH motor dealership, Norman G Booth Pty Ltd.

The boat was to race as Booth Holden.

Hugh and Ian Treharne and Allan Walker met to discuss the options.  Walker remembers, “it had already been decided that the boat would be designed by Bruce Farr and Bill Barnett would be the builder.  We had to decide on either a three-hand or a four-hand boat.”

“We knew that everyone else was going three handers.  We figured that Bruce Farr could provide the goods, and with our Thomas Cameron experience behind us, a four handed boat gave us a ‘point of difference’ to exploit.  Knowing that multi Giltinan champion forward hand Hugh Cooke was available we decided on a four-hander.”

“The boat was beautifully built by Barnett and it was immediately obvious that while all boats were 18 foot long, this was a ‘big’ beamy, fully chined boat, built in ply, and was a lot heavier than expected, and noticeably heavier than Thomas Cameron.  Farr had designed a small skeg, built in forward of the rudder, because the hull was so wide and flat across the stern, that air cavitation was a likely issue.”

Sail area had to compensate, and four rigs were designed to suit.  The #1 mast measured 36 feet.

Hugh Treharne designed and made the sails.  The sail areas were enormous for a centreboard skiff, however Walker re calls “despite the sail areas, we could never get the boat to ‘pop’ to windward.  It always felt like we were sailing a yacht, albeit a very quick one.  We even experienced this problem while test sailing 3-handed mid-week.”

“We had just completed a good spinnaker set, and with all of us out on the trapeze in 25-knots, and a big chop, the bow charged into the back of the wave ahead.  Too big, too heavy, and nowhere to go, the boat stopped like it ran into a brick wall.  The spinnaker, rig and all of us kept going over the bow.”

The Australian 18 Footers League are conducting a survey of current and past 18's sailors, spectators and aspiring 18ft skiff sailors. We want to ensure that we deliver an exciting sport that accommodates the changing needs and interests of both sailors and spectators. Your ideas and opinions are important to us and we would be most appreciative if you could please spare a few minutes to fill out our survey.