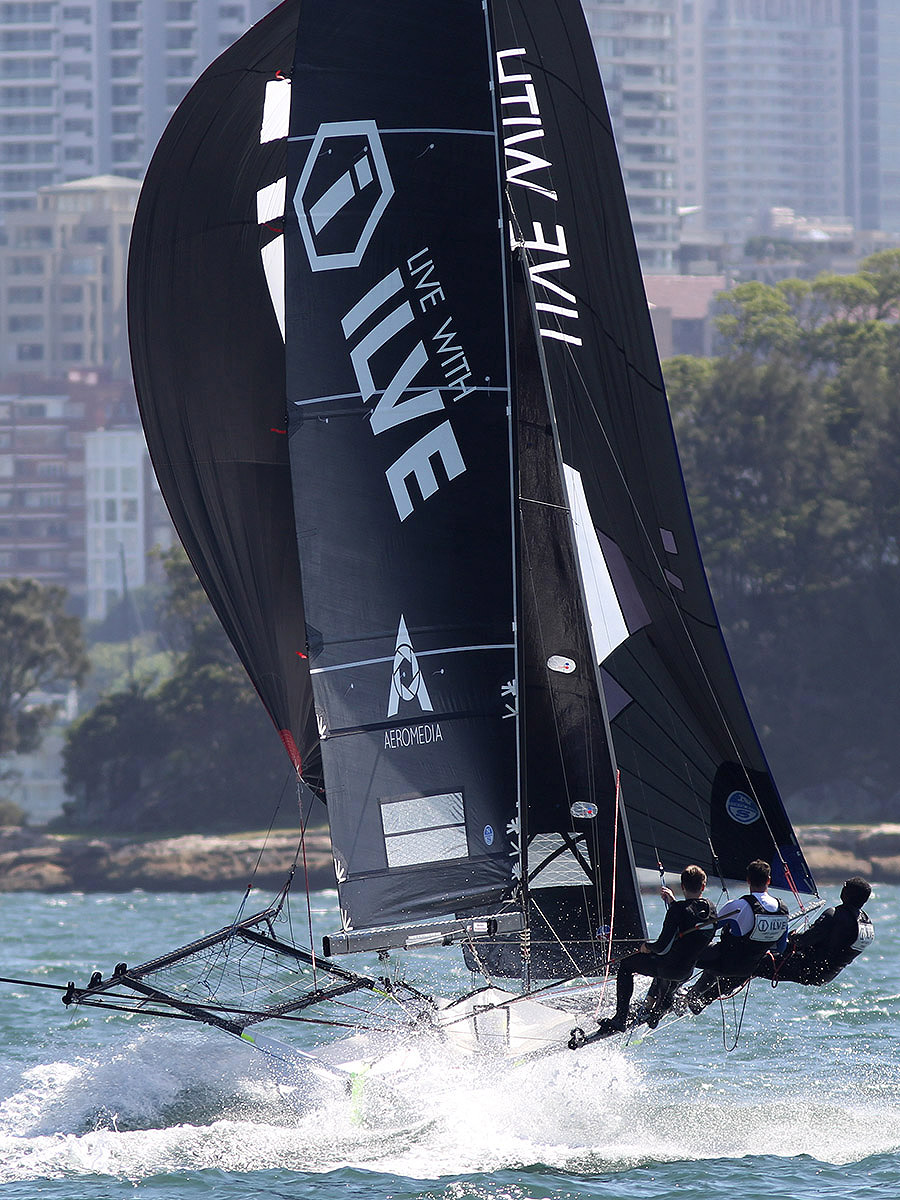 The Smeg team of Michael Coxon, Ricky Bridge and Mike McKensey showed their class in the 17-20-knot North-East wind when they scored a spectacular win in Race 5 of the Australian 18ft Skiff Championship on Sydney Harbour today.

Smeg held the lead for most of the race, but had to withstand a powerful finish from Finport Finance (Keagan York, Matt Stenta, Charlie Gundy) before crossing the finish line line 26s ahead of Finport. Asko Appliances (James Dorron, Harry Bethwaite, Dan Phillips) was always in the top three or four boats throughout the race and finish 58s behind Finport, in third place.

After discarding each team's worst result so far, Smeg and Winning Group are on eight points, followed by Asko Appliances on 9, Bing Lee on 10, The Kitchen Maker-Caesarstone (Jordan Girdis) on 13 and Appliancesonline.com.au on 16.

Following two weeks of extreme wind conditions, today's nor'easter was perfect for all the teams to show their boat speed and boat handling skills. Winning Group won the start at the pin end of the line and held off numerours challengers on the long windward beat to the Beashel Buoy.

Despite the strong challenges, Winning Group held a 7s lead over Smeg, followed by Asko Appliances, The Kitchen Maker-Caesarstone and Bing Lee. Coxon and his team on Smeg elected to gybe shortly afterwards and the move paid off as Smeg took the lead from Winning group as the fleet headed to the wing in Rose Bay.

Asko Appliances was also fast downwind and got to withing 15s of Smeg, but a slow spinnaker drop and mark rounding at the bottom mark allowed Winning Group to get back into second place as the fleet headed back to the windward mark at the Beasel Buoy. Finport Finance began to make a move of this leg and moved ahead of both Asko Appliances and Bing Lee.

Smeg's lead was 45s at the windward mark as Finport Finance and Winning Group went around the Beashel Buoy together.

A slightly checkered run on the long spinnaker run dow the harbour back to the bottom mark off Clark Island saw Smeg's lead halved by Finport Finance, and the race was on over the final lap of the course. The experienced Smeg crew held strong and their confidence in their boatspeed was repaid when they maintaned a 12s lead at the final windward mark, then increased the margin on the spinnaker run back to the finish off Clark Island.

The race was a great hit-out for all teams in preparation for next month's JJ Giltinan Championshp.

Races 6 and 7 of the championship will be sailed next Sunday, and the Australian 18 Footers League's spectator ferry will be there to follow all the action. The ferry will leave Double Bay public wharf at 2pm.