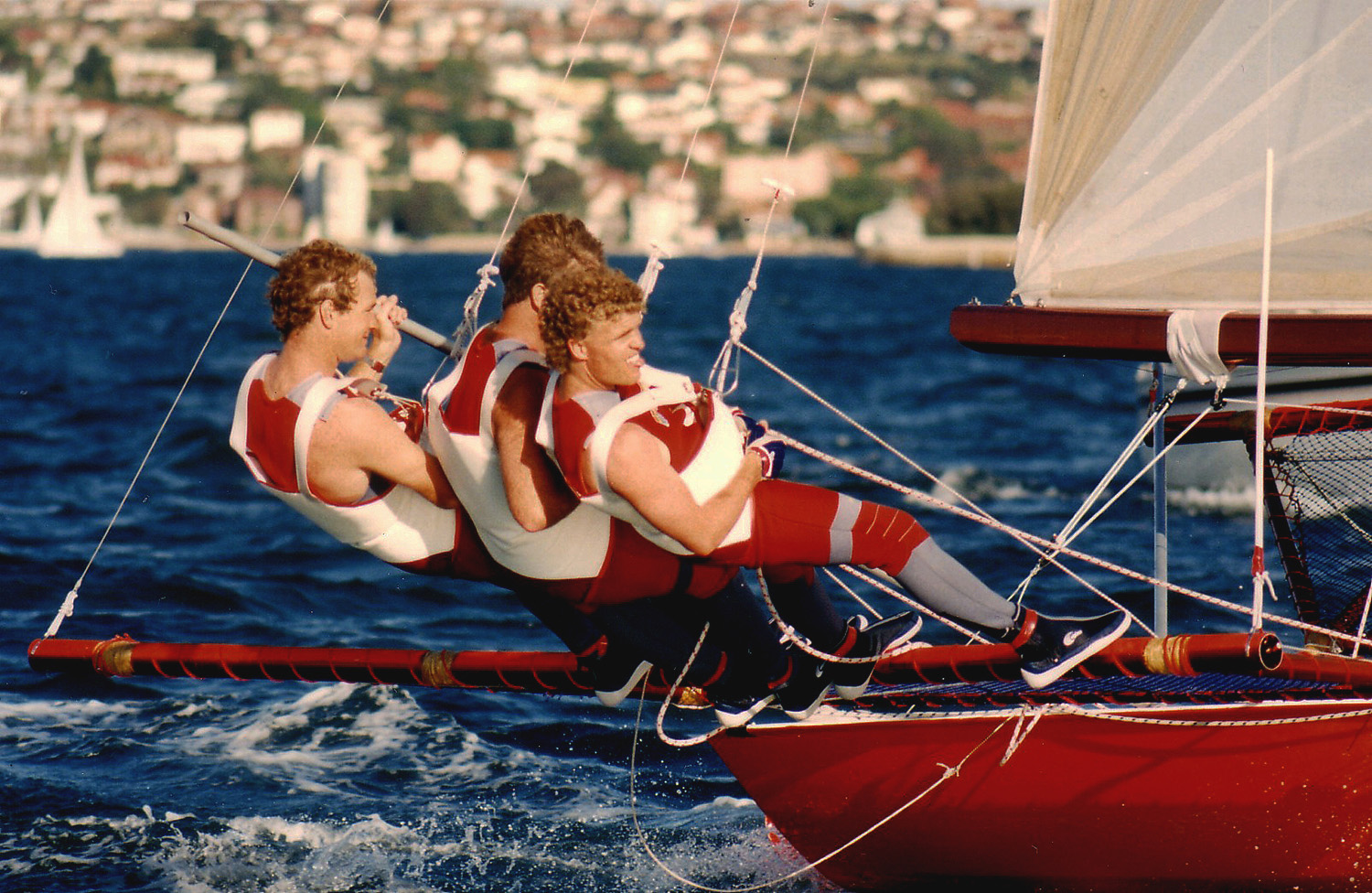 Walsh and the Prudential 1989 champion crew 2

When Michael Walsh, Phil Barnett and Neil Paton teamed in the 18ft Skiff Prudential and won the 1989 JJ Giltinan world championship on Sydney Harbour, they equalled the 1981 record set by the legendary Color 7 team of Iain Murray, Andrew Buckland and Don Buckley.

The Prudential team won all seven races of the championship, with margins ranging from 1m40s to 7m, in a boat which had previously won the prestigious event at Perth, WA in 1987.

This achievement, however, is just part of an intriguing story of boat and skipper.

In 1987, 18ft skiff administrators decided to take the JJ Giltinan world Championship to Perth, Western Australia and the regatta was sailed on the Swan River prior to Australia’s defence of The America’s Cup.

The Iain Murray-designed skiff raced as Chesty Bond in that regatta and was crewed by its builder-skipper Trevor Barnabas, Phil Barnett and Adam South.

As four of the seven races were scheduled to be sailed on the Swan River, starting at either 9am or 10am, crews realized these races would be sailed in much lighter air and consequently bigger No 1 rigs than usual would be required.

The Chesty Bond skiff created a record when the Barnabas-led team used a mast which Barnabas says measured an amazing 44ft above the waterline.

In the championship-deciding final race of the 1987 series, Chesty Bond carried the big rig to an 11-minute victory. The team had created a seventeen-minute lead in the light wind early in the race, before a freshening breeze reduced the margin.

It is the tallest mast used on an 18ft Skiff.

The following year, Barnabas built a new Chesty Bond skiff and tied a controversial victory with 1985 and 1986 Giltinan world champion Rob Brown, who sailed Southern Cross. After the championship, both Barnabas and Brown went into temporary ‘retirement’ leaving the door open for a new champion to take over.

At the same time, due to the increasing costs of competition throughout the 1980s, which had seen the fleet size dwindle, administrators decided to make rule changes for the overall good of the sport.

The changes were complicated as they related to the number and replacement of sails based on their usage in races. The use of Kevlar in the sails of new boats was also outlawed, while good, existing boats were still able to use existing Kevlar reinforced sails.

While the intent of the rules was to make the competition more even and less expensive, the rules were actually quite complicated and led to the unprecedented tie at the 1988 JJs championship.

After winning the 1983-1984 Australian and NSW 12ft Skiff Championships in SOS Marine, and finishing second in the 1984 Interdominion 12ft Skiff Championship to Derek Adams, Michael Walsh had been steadily moving up to the top of the fleet in the 18s over the following five seasons, and realised what was required to succeed under the new 1988-1989 season 18ft Skiff rules.

Michael, along with his brother Mark, first joined the 18 footer ranks for the 1984-1985 season in Rob Brown’s former Bradmill skiff, which raced under the company’s product name, Stubbies.

A good rookie season was rewarded when the sponsor provided Walsh’s team with a brand new Stubbies skiff for 1985-1986. Although the second season didn’t live up to the first year, Walsh and his team moved on to another skiff, Hanimex-Fuji, in 1986-1987 and finished fourth on the Swan River, Perth.

In 1987-1988 his next boat was Finnair, which officially finished second behind the tied Chesty Bond and Southern Cross. When Barnabas and Brown both retired, Michael sensed his opportunity and began his plan to win the 1989 Giltinan world Championship.

Having sourced the hull, he teamed up (again) with Michael Carter of Fraser sails, who was a big part of his success in the 12ft Skiffs and completed the ‘package’ by signing the former Chesty Bond crew mates Phil Barnett and Neil Paton.

Walsh’s meticulous planning was expecting victory, but nobody could have expected the team would win the NSW, Australian and Giltinan world championships with a zero score in each.

The 1990 JJ Giltinan Championship was sailed on the Brisbane River, Queensland for the first time since 1975 and produced a controversial regatta, as well as one that Michael Walsh would prefer to forget.

Many competitors, both local and visiting, were critical of the river course which was subject to a 3.5 knot flood tide and, generally, with sea breezes, causing the fleet to have to work the tide for almost six nautical miles on the first work.

For Walsh and his Prudential team, Neil Paton and Kevin Nixon, it was a disaster due to an incredible run of bad luck. According to the late Ian Grant in Australian Sailing magazine, the team had gear failures, capsizes, 720-degree penalty turns, a collision with a ferry, and finally, Michael Walsh broke his leg in three places during the final race.