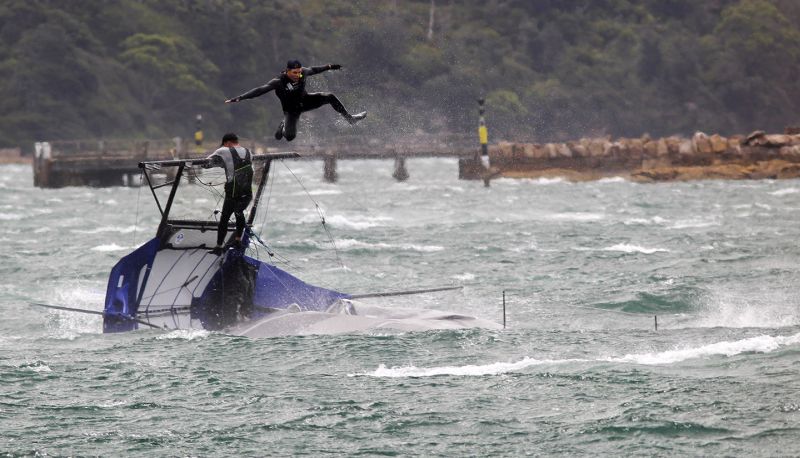 30/11/2020
Fresh North West winds over 20-knots, with gusts up to 40-knots prior to race time, cast doubt over the Australian 18 Footers League being able to stage Race 2 of the NSW 18ft Skiff Championship on Sydney Harbour today, and finally the race was abandoned when the wind conditions finally became too strong for even the most experienced teams.
As the scheduled race start time approached, a number of the rookie teams were concerned  by the conditions and elected to stay ashore for safety and damage reasons.
Soon after more experienced teams, including the Race 1 winner and current Australian champion tech2 team, also decided not to risk damage to their skiffs and also elected not to hit the water.
Only three teams managed to reach the vicinity of the start line in Rose Bay but the wind was so fierce that even the three experienced teams were unable to cope with the worsening conditions.
Yandoo, skippered by 2000 JJ Giltinan champion John Winning, was first to arrive, followed by Winning Group, skippered by seven time Giltinan champion skipper Seve Jarvin.
The third team was Smeg, skippered by three-times Giltinan champions Michael Coxon, which was in the vicinity of the start line but fell foul of the conditions and was forced to accept assistance to get back to the rigging Area.
Wind gusts were certainly 40-knots, or more, and there were reports that the wind at nearby Sydney Airport was up to 50-knots.
No decision has been made as yet regarding the re-sail of the race.
Race 3 of the NSW Championship will be conducted next Sunday, December 6.
Spectators can follow the racing on board the club's spectator ferry, however due to the COVID-19 policy, numbers are limited. Booking online through the club's website www.18footers.com is essential. https://www.18footers.com.au/18-footers-sailing/spectator-ferry/
For those unable to make it out onto the water, AeroMedia Live Broadcast team will be on Sydney Harbour to capture all the action.  Live streaming is available at www.18footers.com by clicking on the '18 Footers TV' link.
– Frank Quealey