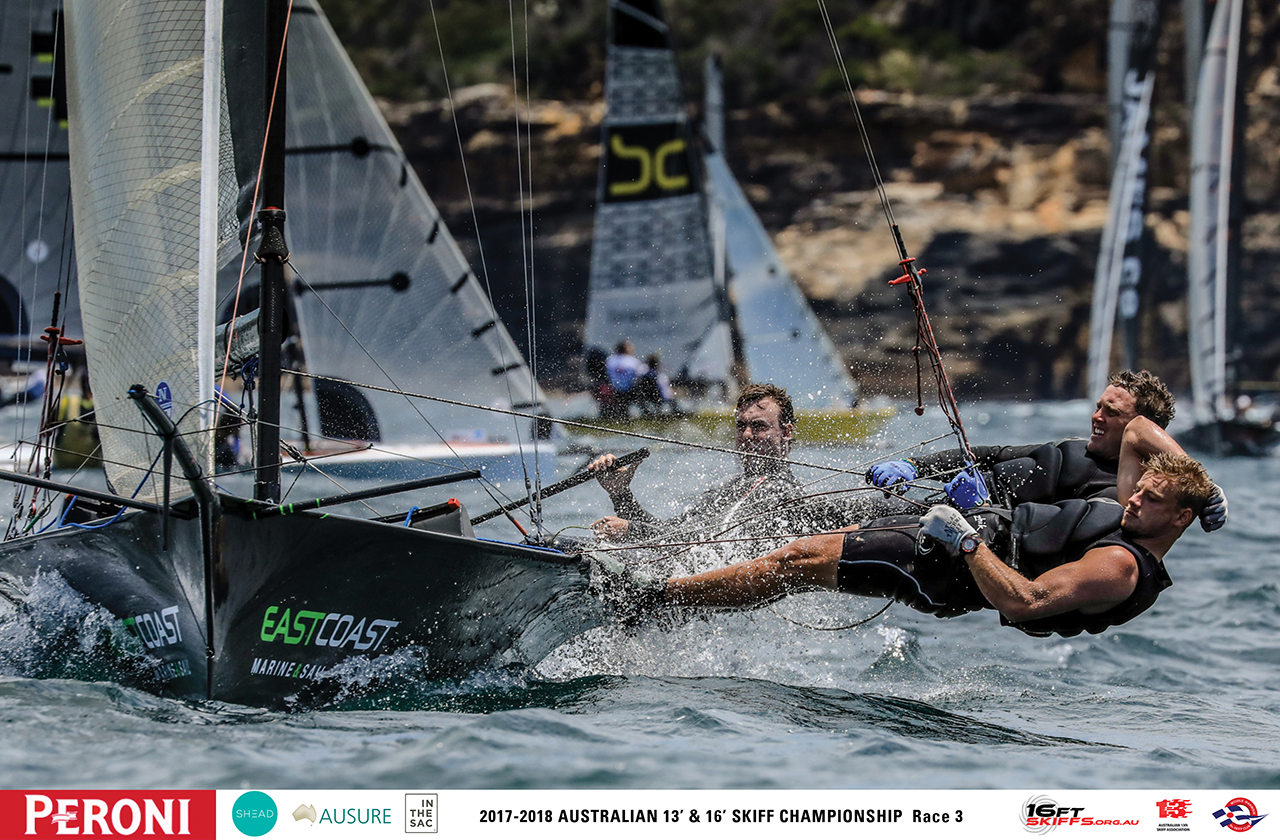 What a difference a day makes – the race committee’s decision to utilise the lay day proved to be a good one with back-to-back races sailed in a good 15 knot nor’/nor’ easter, although a big tide made for choppy conditions.

With a minute to go, there were crew members overboard as entrants jockeyed for position at the start line of both races, making for an exhilarating first work and constant changes in the lead.

The big news of the day was the dismasting of Manly Surf n Slide 100 meters from the finish in race four. However in true comradeship, whilst skipper Joe Turner was in hospital with what he described as “a very sore arm”, the fleet pulled together and a new mast has been built overnight and today, with Ben Bianco putting his hand up to steer the boat.

Great to see, despite the intense rivalry on the water, the whole skiff community came together as one to help a fellow sailor.

Visiting boats have now got used to the shift patterns and almost the entire fleet in both races went straight to the left hand side of the course to make the most of the hooking breeze around the rocks.

Both races produced cameo performances with She Bang, sailed by Anthony King, right up there at the hectic first mark rounding with East Coast Marine and TJS in hot pursuit. In the end, it was the famous four that prevailed, with Manly Surf n Slide grabbing a win. Bryden’s was 2 minutes behind, then TJS and East Coast closed out the top four in Race 3.

Race 4 produced a bolter in Middle Harbour’s BrandCents Consultancy charging up the first work, only to find they were OCS – game over.

From there it was all TJS dominating the first work and leading by several hundred metres. It was theirs to lose – but they didn’t. That said, in both races almost the entire fleet misjudged the last gybe angle to the finish. Many came in too hot and fell over agonisingly close to the finish line whist others retreated to complete the last few hundred metres in a two-sail screamer.

Interestingly, the 13s had a delayed start that meant they blended into the 16 fleet which was on its second lap. The little brothers embarrassed some their bigger siblings, actually sailing both over and under them with more raw speed.

Bigfoot, skippered by Hugo Taranto, and Mighty-Mite helmed by Carlton Smith, put some of the 16’s to shame, but when they turned the corner, the 16’s square metre sail area told the story. That said, it gives the youngsters the adrenalin rush they need to want to progress to the next class.