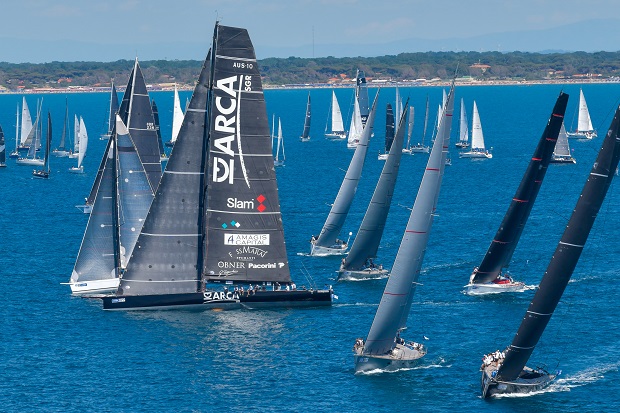 After a year lost due to the pandemic, the 12th edition of the 151 Miglia-Trofeo Cetilar offshore race set sail today (Sunday) at 1400 CEST from Livorno in Italy with a near-record fleet of 250 yachts, including 13 maxis.

As usual, the 151 mile long race takes the fleet from Livorno to a weather mark off Marina di Pisa, southwest to the famous Giraglia rock off northern Corsica then southeast past the Tuscan archipelago, and Elba, to a turning mark at the Formiche di Grosseto rocks and then north to the finish off Punta Ala.

Creator of the race, and one of its key supporters, is International Maxi Association Vice President, Roberto Lacorte, whose company is the event’s title sponsor.

In recent years, Lacorte has regularly competed in his trusty Vismara Mills 62 SuperNikka. However, this has now been sold as Lacorte awaits the launch of his radical 19m long AC75-inspired flying maxi, FoilingNikka.

“This is a very special edition – almost like the first; a rebirth after the COVID pandemic,” says Lacorte. “We are pleased to be back, but I am very sad that we have had to cancel all the social aspects that are usually such an important part of this event. I have some special ideas for next year which I have already started working on.”

This year Lacorte is joining the crew of Skarp, Vincenzo De Falco’s Mills 43, with tactician and sailmaker Dede De Luca (who also runs the 69F race boat circuit on which Lacorte also competes).

Looking forward to the event, Lacorte said: “The race will be very technical with light to medium winds forecast from the north or north-east, instead of the north-west, which is more usual in this area. Rounding all the islands like Giraglia and Elba will be critical, requiring major effort from both tacticians and crews in general.”

Favourite for line honours this year is the Trieste-based 100ft maxi ARCA SGR, campaigned by Furio Benussi and his Fast and Furio Sailing Team. This impressive yacht is a canting keel maxi, which under her original owner, Australian Grant Wharington, won Rolex Sydney Hobart Yacht Race line honours in 2003. She was then called Skandia Wild Thing and was at her original length of 98ft.

Looking forward to the event, ARCA SGR’s boat captain, Stefano Spangaro commented: “Winds blowing from the north or north-east should make this race interesting for us. It will be a quick race if we manage to avoid the wind shadow of Elba. In that case we may be able to break the race record established in 2019.”

Among the crew racing on board ACRA SGR is Italy’s Rio 2016 Olympic Nacra 17 sailor Stefano Bissaro.

A boat that knows the route of the race very well, and returns this year, is the Davidson 69 Pendragon VI, now being campaigned by new International Maxi Association member Carlo Alberini.

Under Nicola Paoleschi, and with a crew including Italian Olympic windsurfing legend Alessandra Sensini, Pendragon in 2018 set a race record of 15 hours, 30 minutes and 45 seconds (broken the following year by Rambler 88).

Other hot prospects for winning the IRC Over 60 class overall under IRC include Guido Paolo Gamucci’s Cippalippa X, the new canting keel 60-footer from Mylius Yachts. She finished fifth in the Maxi Yacht Capri Trophy and should show better potential offshore.

Never to be discounted is Twin Soul B, the Mylius 80 of Mylius Yachts President Luciano Gandini. Already this season she has finished second in the Yacht Club Italiano’s Regate di Primavera Splendido Mare Cup in Portofino at the beginning of May, just ahead of Pendragon VI.

Also to watch is Riccardo de Michele and his immaculate silver Vallicelli 78 H20, a regular class winner at the Maxi Yacht Rolex Cup in Porto Cervo and who, up until the pandemic stuck, had been venturing out onto the race course more and more.

“This is my first event after so many months without any sailing,” said de Michele. “I was about to race in Capri, but at the last moment we decided to cancel because COVID restrictions were still very severe then.

“This is my very first 151 Miglia and I thank our friend Roberto Lacorte, who after so many years of insisting, this year finally managed to get me to the start line!”

A significant change to the H2O crew for this race is that regular tactician Lorenzo Bodini is racing on Pendragon VI and Croatian Olympic Finn sailor, Ivan Kljaković Gašpić, is standing in for him on this occasion.

Progress in the 151 Miglia-Trofeo Cetilar can be followed in real time on the tracker at: http://yb.tl/151miglia2021