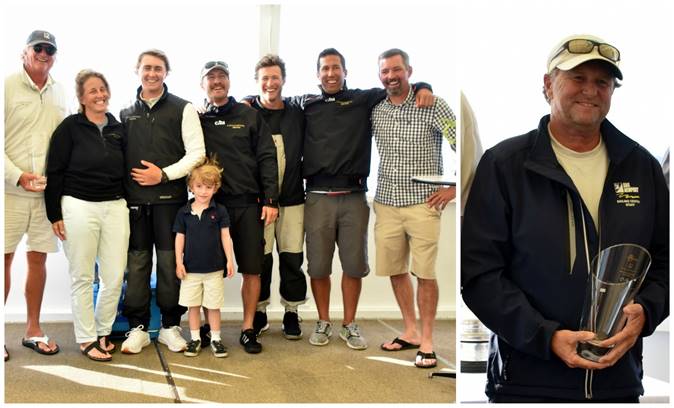 NEWPORT, R.I. (June 30, 2019) – The Newport Trophy Regatta, hosted by Ida Lewis Yacht Club and held this weekend (June 29-30) for ten 12 Metres, gave a sneak preview of the intense racing to come in July’s 12 Metre World Championship, where 21 of the historic boats will compete.

The regatta was started by Ida Lewis Yacht Club during Newport’s America’s Cup days as a fleet-racing competition for all eliminated would-be defenders and challengers for the America’s Cup. The event has been held annually since, typically hosting the 12 Metres in the Americas fleet that make Newport their home.

This year’s regatta was comprised of three ‘round-the-buoy races – held on Saturday in medium air and lumpy wave conditions on Rhode Island Sound – followed on Sunday by a race around Conanicut Island that was part of the International Yacht and Athletic Club’s Newport Cup regatta.

Columbia (US-16) won its Traditional Division in a tie-breaker over American Eagle (US-21) but also won the IYAC Newport Cup overall when it was dual-scored for that race under PHRF handicap. Columbia has been chartered for the Worlds by Anthony Chiurco (Princeton, N.J.) who helmed the boat while owner Kevin Hegarty (Newport, R.I.) and his crew of 15 years sailed it. “Columbia is faster now than she has ever been,” said Hegerty. “Every year we tweak her to make her quicker, and we’ve done a few things this year to really step it up.”

In the knife fight that was the Modern Division competition, Jack LeFort’s (Jamestown, R.I.) Challenge XII (KA-10) led by only two points over Dennis Williams’ (Hobe Sound, Fla./Newport, R.I.) Victory ’83 (K-22). Challenge XII and Victory ’83 both won two races in their series. (Victory counted the around-the-island race as one of its two.)

Johan Black Petersen’s Kiwi Magic (KZ-7), here for the Worlds from Denmark, joined Gunther and Maggie Buerman’s (Highland Beach, Fla./Newport, R.I.) New Zealand (KZ-3) for Saturday’s races in Grand Prix Division while Legacy (KZ-5), chartered by Danes Jesper Bank and Thomas Anderson for the Worlds, made a last-minute decision to sail in the around-the-island race. New Zealand, which won the division, won all the buoy races but succumbed to Legacy in Sunday’s race, finishing second to Legacy’s first.

“It was great to have three of the ‘plastic fantastics’ out there, and today showed that the boat handling of all three was phenomenal,” said New Zealand’s tactician Brad Read, adding that a total of four Grand Prix Division 12 Metres will sail at the Worlds. “In general, it’s really amazing that you have these boats from so many generations competing 30 to 50 years after they were originally built. We’re just so fortunate that we have these great weapons to go sailing on.”