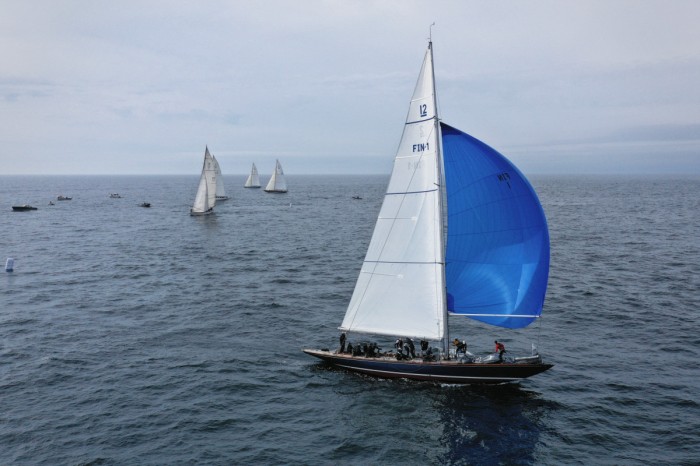 Official competition for the 2021 EVLI 12 Metre World Championship commenced today with two races held in the Gulf of Finland.

In Race 1 keeping an eye to the sky paid off for the hometown Blue Marlin (FIN-1) team, skippered by Henrik Andersin (Kotka, FI) who won the first race in light and shifty winds. On the first weather leg, Vim (US-15) took an early lead after crossing Wings (K-15) on starboard with the 9-boat fleet in pursuit on the right side of the course.

Blue Marlin (FIN-1) was mid-fleet when Andersin noticed “the clouds looked different than usual.” Anticipating a significant wind shift, he split from the fleet taking the left side of the course and was first to the top mark followed only by Flica II (K-14). These two held their positions downwind taking first and second place respectively followed by Vim (US-15) who finished third.

After a pause for course adjustments, one abandoned start and one general recall, Race 2 got underway in a building 15-17 knot breeze with choppy seas. Wings (K-15) helmed by Philipp Skafte-Holm (Copenhagen, DK), held an early lead until crossed by Vim (US-15) on starboard during the second weather leg.

Vim (US-15) sailed to the right side of the course while Wings (K-15) continued to the left closely pursued by Jenetta (K-1) helmed by Thomas Müller, (Flensburg, DE) who eventually overtook them at the last mark rounding. Vim (US-15) skipper, Patrick Howaldt said: “It was very close racing in difficult conditions, the first three boats finished within one boat length of each other—this is a very closely-matched and competitive fleet.”