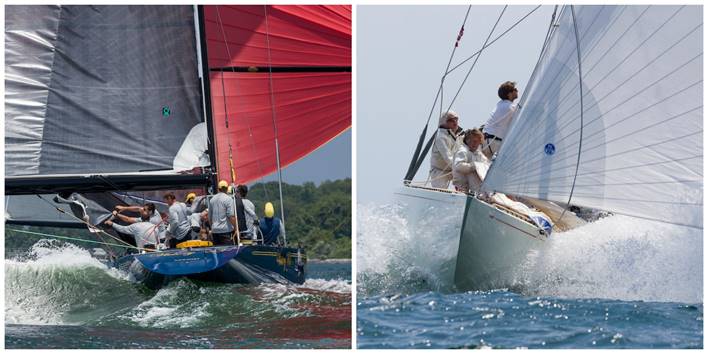 After five races over two days (July 6-7), New Zealand (KZ-3), Victory ’83, (K-22) Columbia (US-16) and Nyala (US-12) became the names to beat, winning their respective divisions, but not without a fight. This regatta foreshadowed the intense competition to come when 22 of these yachts – considered some of the most iconic in the history of sailboat design and spanning the decades between the 1920s and 1980s – compete at the Worlds.

“It was unprecedented and awesome to see so many 12 Metres together on Narragansett Bay and Rhode Island Sound (where they sailed, respectively, on Saturday and Sunday),” said 12 Metre Worlds Event Chair Peter Gerard, “And it will be even more spectacular next week when another six 12 Metres join the racing, making it the largest gathering of 12 Metres since the 2001 America’s Cup Jubilee.”

After two firsts and a second on Saturday, Dennis Williams’ Victory ‘83 (KA-22) had four points on Enterprise (US-27) going into Sunday’s Modern Division racing. “We just wanted to sail the racecourse as fast as we could,” said Williams, who won Sunday’s first race by 20 boat lengths or so and “never looked back” after establishing an early lead on the eight-mile twice-around windward-leeward course. “In the second race, a start near the pin end didn’t really work for us; we got pinned out by Intrepid (US-22) and couldn’t sail the course we wanted to sail. We finally got free and ended up second but took a penalty (2 points) for fouling Challenge XII (KA-10) at the weather mark.

“If you make a mistake you get shot out the back; it’s pretty simple,” said Williams. “You can’t find big boat around-the-buoys racing like this anywhere else. There’s lots of very close competition, and the boats are technically challenging; it’s really a lot of fun. We hope we can go out and show our competitors the way around the course next week!”

Nyala (US-12) won all of its races in Vintage Division, but skipper Mauro Pelaschier said he will have to concentrate to stay ahead of the rest next week. The last time he sailed in Newport was 36 years ago (1983) when he was helmsman for Azzurra (I-4), the first Italian challenger for the America’s Cup. “I’m really happy to be back in Newport where I started my professional sailing life,” said Pelaschier, who has also sailed in three Olympic Games. “My crew is all from Azzurra, too, so we are not only a vintage boat but also a vintage crew,” laughed Pelaschier. “We have sailed together in many regattas, so we always learn, learn, learn. Our boat is competitive for sure, and the crew is ready.”

New Zealand (KZ-3) with Max Buerman at the helm, edged out Kookaburra (KA-10), steered by Torben Grael in Grand Prix Division, while Columbia (US-16) won Traditional Division over American Eagle (US-21).

In ROAD TO THE WORLDS Waypoints Series Standings, the point spread is close: Courageous (US-26) is leading with 87 points, while Victory ’83 (K-22) is close behind with 84 points. They are followed by American Eagle (US-21) and Challenge XII (KA-10), each with 82 points.