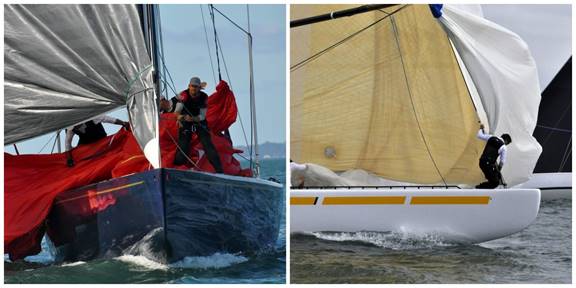 NEWPORT, RHODE ISLAND (September 25, 2017) – Wind effects of Hurricane Jose shaved a day off the front end of the three-day 12 Metre North American Championship that started Friday, Sept. 22, while no breeze at all stole the last day. In the end, three races on Saturday told the story of a very competitive fleet wrapping up its season and looking long-term to the 12 Metre Worlds that are scheduled for Newport in 2019 as a culmination of the 12mR Class ROAD TO THE WORLDS series.

“It was a disappointment to lose Friday as a race day,” said Event Chair Peter Gerard, “but there was just nothing we could do about that. He explained that for several days prior to the regatta, winds of 25-30 knots with gusts to 40 had made it impossible to launch several of the historic 12 Metres that were dry docked. The first window of relief came Saturday morning, so racing was rescheduled for later that afternoon when all boats could participate. “We managed to hold three races in a dying 12-15 knot breeze, and that ended up being the regatta after the wind completely shut off on Sunday.”

Challenge XII, one of the newest additions to the 12mR class, topped the Modern division, beating out Defender by one point in overall scoring. The well-polished team, which includes owner/skipper Jack LeFort (Jamestown, R.I.) and Newporter Ken Read of Volvo Ocean Race fame, suffered a “bad first beat” and a broken spinnaker pole to finish fifth in its first race but then got “back on track” to win the last two races.

“We hated to end the season like this (with a shortened regatta),” said LeFort, “but I think the race committee did a great job of pulling it off.” He added that it was good to see Defender (another new boat in the fleet, owned and skippered by 12 Metre World Champion Dennis Williams of Hobe Sound, Fla./Newport, R.I.) so competitive. “They have new sails, a lot of time and effort in the boat, and they’re doing really well.” (Victory ’83, also owned by Williams, and Enterprise are expected to join the fleet in 2018.)

Defender’s score line of 1-2-5 reflected a man overboard in the third race. He was picked up by a safety boat, which automatically gave the team points that were equal to last place plus one.

In Grand Prix division, Gunther Buerman (Highland Beach, Fla./Newport, R.I.) and his New Zealand team, which includes Ken Read’s brother Brad Read, won their fifth North American title in a row, beating out Laura. “In our class we get to do what these boats were made for. We match race, and the starts are especially great, because we spin around following each other just like they do in the America’s Cup.” Buerman credited Read and Lexi Gahagan, an America’s Cup veteran, for his team’s winning tactics at the starts. “If you don’t win the start, it’s hard to get back in front.”

Weatherly, chartered by Jay Schachne (Barrington, R.I.), won the Traditional division on a tie breaker with American Eagle. Turning in a score line of 3-2-1, Schachne said he was happy to improve with every race and is honored, after three times trying, to finally be a North American champion, especially when the boats in his division were always neck-and-neck. “The fun part is that at this stage of my life, at 63 years old, I’m playing a sport like I’m 15, with the same excitement and focus. It’s really a kick, and what a privilege. The 12 Metres are the most beautiful girls at the dance; they are elegant, they are history, and when you’re sailing them you’re in the past and the present at the same time.”

Courageous is currently the top Americas Fleet contender in the Waypoint Series standings. Gerard says he expects that 25+ boats – more than half coming from outside North America – will compete in the 2019 12 Metre World Championship.