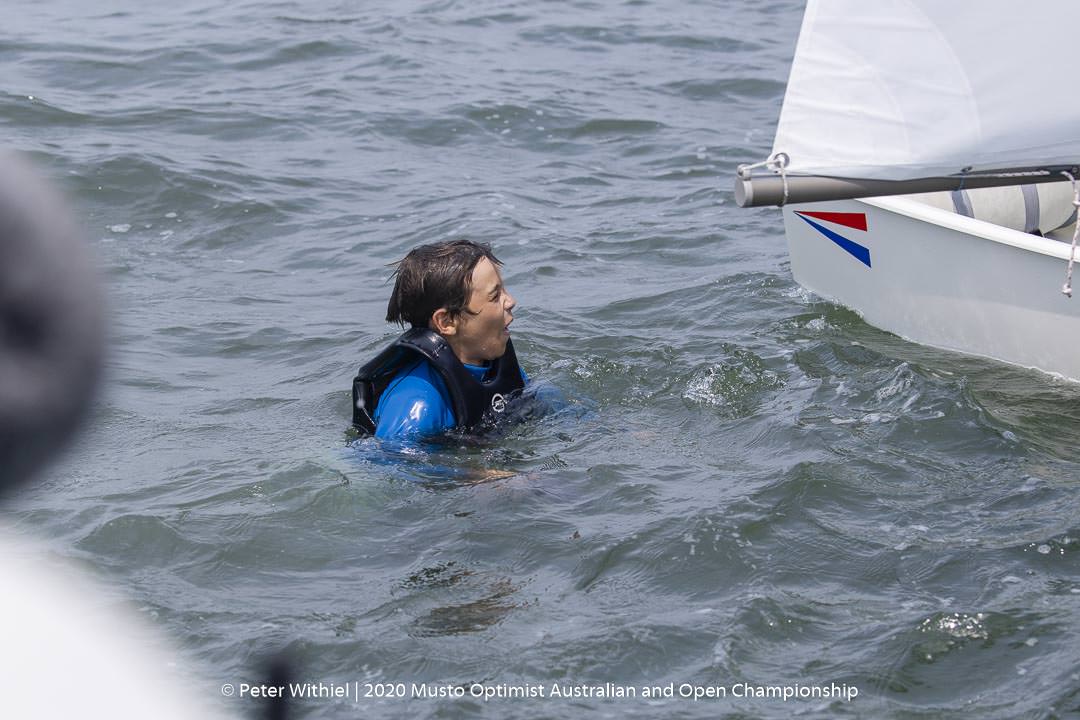 11-year-old Aussie Joel Beashel has jumped up the leaderboard on the final day of the 2020 Musto Optimist Nationals to be crowned Australian champion and first overall in the regatta against a string of talented international entrants.

The final day of the event started with little optimism about the forecast, with almost no wind at 11am for the scheduled start time and a hazy cloud build up.

The fleet was held ashore until 12.30pm when a light sea breeze started to filter in, blowing the haze away and allowing the fleet to get their final two races of the series underway.

In the Gold fleet it was super tight at the top and sailors were also preparing for the second drop to come into play after the first race of the day, which was set to create a huge shuffle in the leaders.

French sailor Zou Schemmel took the overall lead after the first race of the day with a win, while the 11-year-old Beashel slipped through to a second place to really shake things up at the top.

The first-placed female sailor Samara Walshe from the United States was also very much in the hunt for the overall title going into the last race, as was Rocco Wright from Ireland, while the overnight leader, Australia's Matty Goss, was still sailing consistently, all creating a great tussle for the final race.

Going into the last race, there was a big split of all the competitors with Walshe and Beashel starting in the middle of the line and Goss, Schemmel and Wright all at the boat end.

After a week of right-hand shifts, the first big left-hander of the series came, with Beashel and New Zealander Joe Leith in great positions to take advantage of the fluky Port Phillip breeze.

Leith went on to win the race while Beashel finished sixth over the line, enough to jump two spots and win the overall title from Irishman Rocco Wright and American Samara Walshe.

Matty Goss battled hard into second spot overall in the Australian Championship, albeit with a tough result in the final race, booking himself a spot for the Worlds, which will be hosted at Riva Del Garda in Italy in July.

In the other fleets, Queenslander Jack Saul won the Silver fleet from fellow state team member Leonardo Hughes in second, while Victorian Hayley Archer made it an all Aussie top three.

It was great racing and all week the standard improved from the Silver fleet every race, while in the Intermediates Murray Duthie from Perth took the win from Elia Sellers in second and Charlie Stay in third, a dominant performance from Duthie only carrying 1s and 2s on the scorecard.

The Green fleet sailors had a great event and a lot of fun, sailing in close proximity to the club with Brendan Goh placing first in front of the Tan siblings Ashlea and Atticus from Queensland.

Overall, the Royal Yacht Club of Victoria stamped itself back on the sailing landscape with a fantastically run event, having only had six months to prepare for the 230-plus fleet of competitors and 60 volunteers looking after racing.

It truly was a super performance by the club, which has fantastic facilities and will only continue to improve its capability at running major events over the next 18 months, as the club transitions into running more off-the beach sailing.

The club will also be hosting the next International Cadet World Championships at the end of the year when more of the world's talented juniors get a taste of the northern waters of Port Phillip.