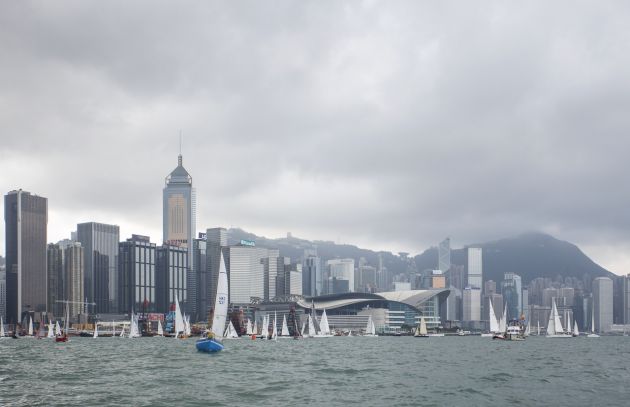 Starting at 0830hrs this morning at Royal Hong Kong Yacht Club in Causeway Bay, 232 boats gathered on two start lines in 8 to 10kts of easterly breeze hoping to be able to race the full 26nm circumnavigation to starboard.

After getting all the classes on the outer line away without a single boat starting ahead of time, Race Officer Inge Strompf-Jepsen took the committee boat to port to check whether the breeze extended through the western approaches and, more importantly, if there was enough to keep the fleet moving through Cyberport.

Finding adequate breeze, Stompf-Jepsen noted the scorching progress of RHKYC Coach, Rob Partridge on his International Moth, who had already passed through the second of two check-in gates at Cyberport and quickly made the decision to allow the fleet to ‘go all the way’.

Partridge finished after just over 2 hours and 47 minutes of racing – not a course record but enough to claim Line Honours by a country mile. Next boat to finish was at the other end of the size spectrum, with Frank Pong’s 72 foot Jelik completing the course ahead of a mix of big boats, dinghies, one-design keelboats and beach catamarans.

The breeze was good enough to allow everyone who wanted to finish to reach Kellett island before the cut-off of 1700hrs, with classic ketch Jadalinkir and big boat Adagio the last boats to cross the line.

With several boats scoring OCS, provisional results show youth sailor Calum Gregor winning on 29er Wayne, having cleaned up in 2014 on his 420 dinghy, ahead of Karl Chan’s Hobie 16 and Ka Chun SIU’s 420 dinghy. The first placed keelboat was Etchells Jezebel in 7th and the first placed Big Boat, Signal 8 in 8th place.

The prizegiving for the sailing element of this great Hong Kong event will take place tomorrow night at JW Marriott’s Flint Grill & Bar, the first time for many years that the awards ceremony has taken place away from the Club.

And on the paddling side of the Around the Island Race, the battle between the Royal Hong Kong Yacht Club and Victoria Recreation Club's  men's unlimited crews was tipped to be the hardest fought battle of the day and it certainly lived up to expectations. VRC took advantage of their lighter boat in the flat sections to take the lead early, expertly navigating the maelstrom of waves at 'Big Wave Bay' to run away with a victory of over 11 minutes.

But it was the women's Unlimited race that proved the most thrilling of the day. The victors of Around Po Toi, Hong Kong Outrigger Canoe Club, went into today with the strongest results in the lead up races. But it was to be a fast finishing RHKYC crew who pushed through in the dying stages of the 42km race to steal victory from HKOCC. The RHKYC ladies expertly navigated the rolling swells off Shek O to push past the favourites.

Coastal rowing boasted a strong field of double and coxed quadruple scull crews. Brian Henderson, a veteran ATIR racer, described the conditions at the Kissing Wales point as a 'washing machine'. His crew was able to rise above the challenging swells to take out the Double Sculls event in a time of 4 hours 23 minutes and 7 seconds.

Overall, a field of over 230 rowers and paddlers competed, with the largest numbers of coastal rowing boats seen in the race's history.

Roger Holmes, race coordinator and seven-time ATIR competitor, was ecstatic with the success of this year's event stating, "it was an honour to work with such great team of volunteers. This year was certainly the best one yet!  Thank you to Marriott Rewards for their invaluable contribution to this year's event. "

“We are extremely pleased with the success of this year’s Around the Island Race and delighted to fill up the Club’s Main Lawn with over a hundred Marriott Rewards Elite Members at one of Asia’s largest sailing races” said Anka Twum-Baah, Vice President , Customer Loyalty and Content, Asia Pacific at Marriott International. “We would like to thank the Royal Hong Kong Yacht Club for a successful event.   We look forward to providing more unique experiences to our Elite Members as a gesture of appreciation for their loyalty and business.”