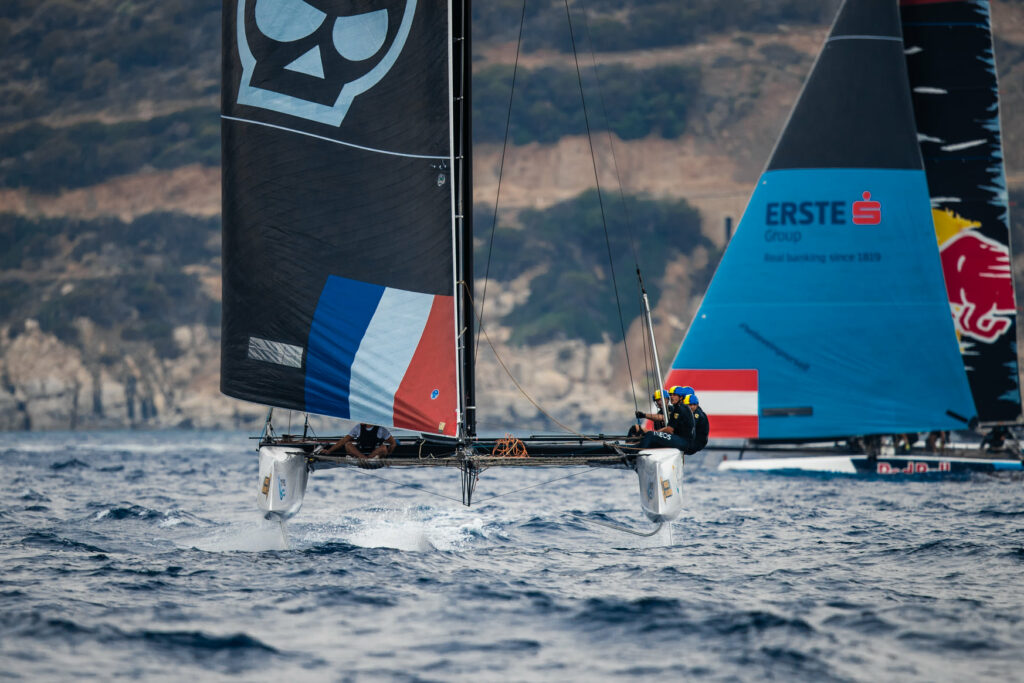 Zoulou won the first and only race on day one of the Villasimius GC32 World Championship. Pic - GC32 Racing Tour/Sailing Energy 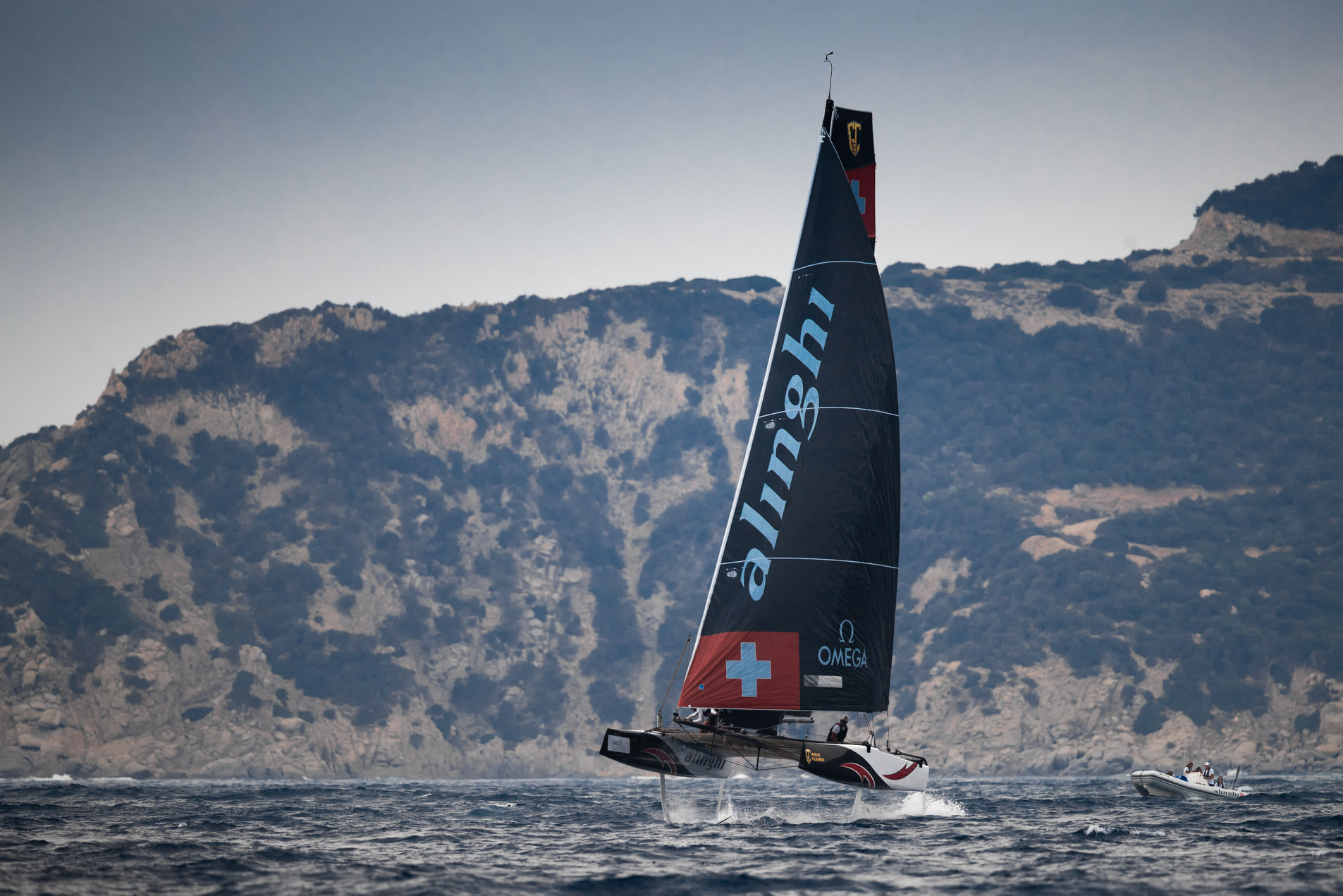 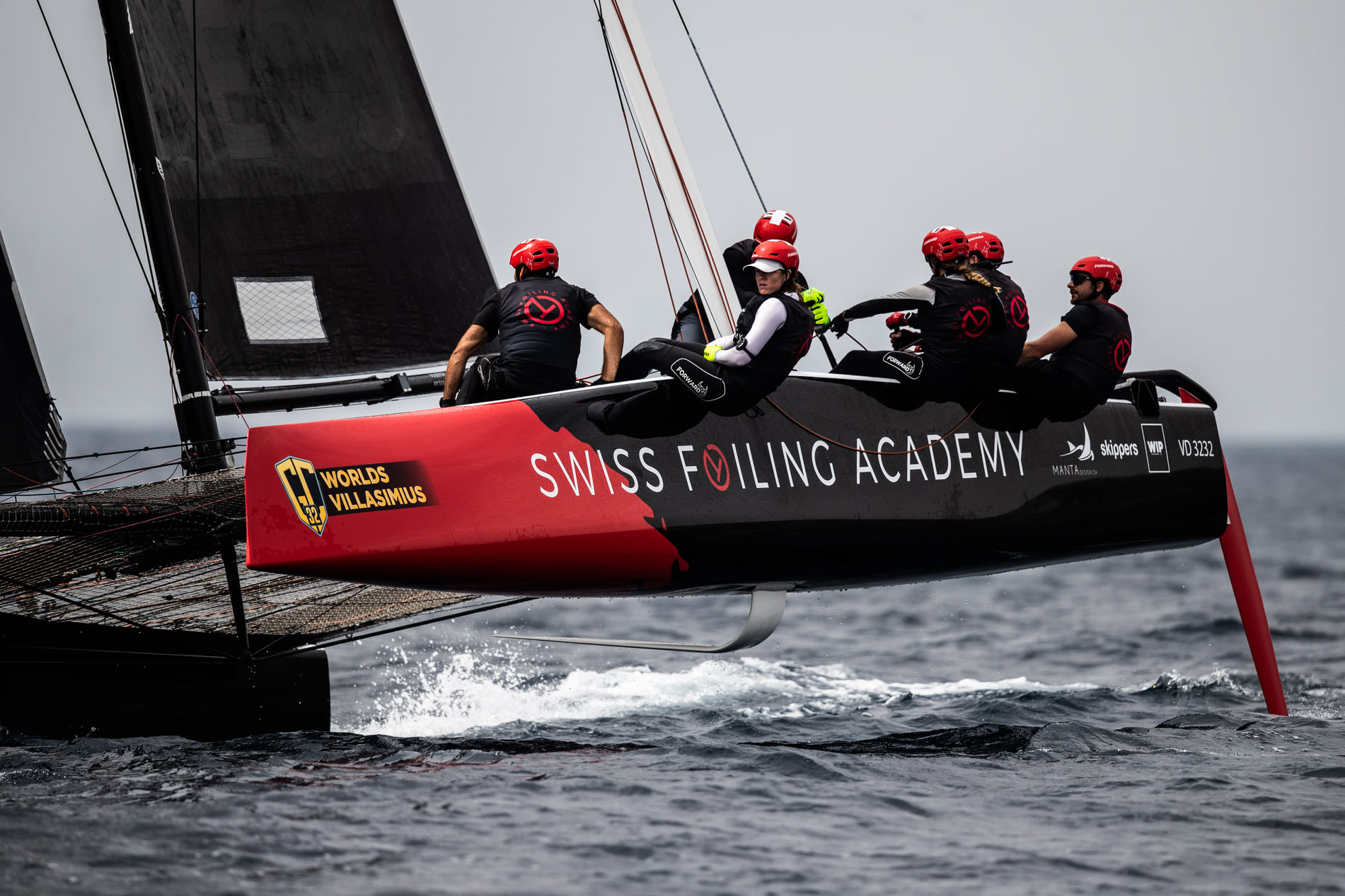 Swiss Foiling Academy was over the line in race one. Pic - GC32 Racing Tour/Sailing Energy 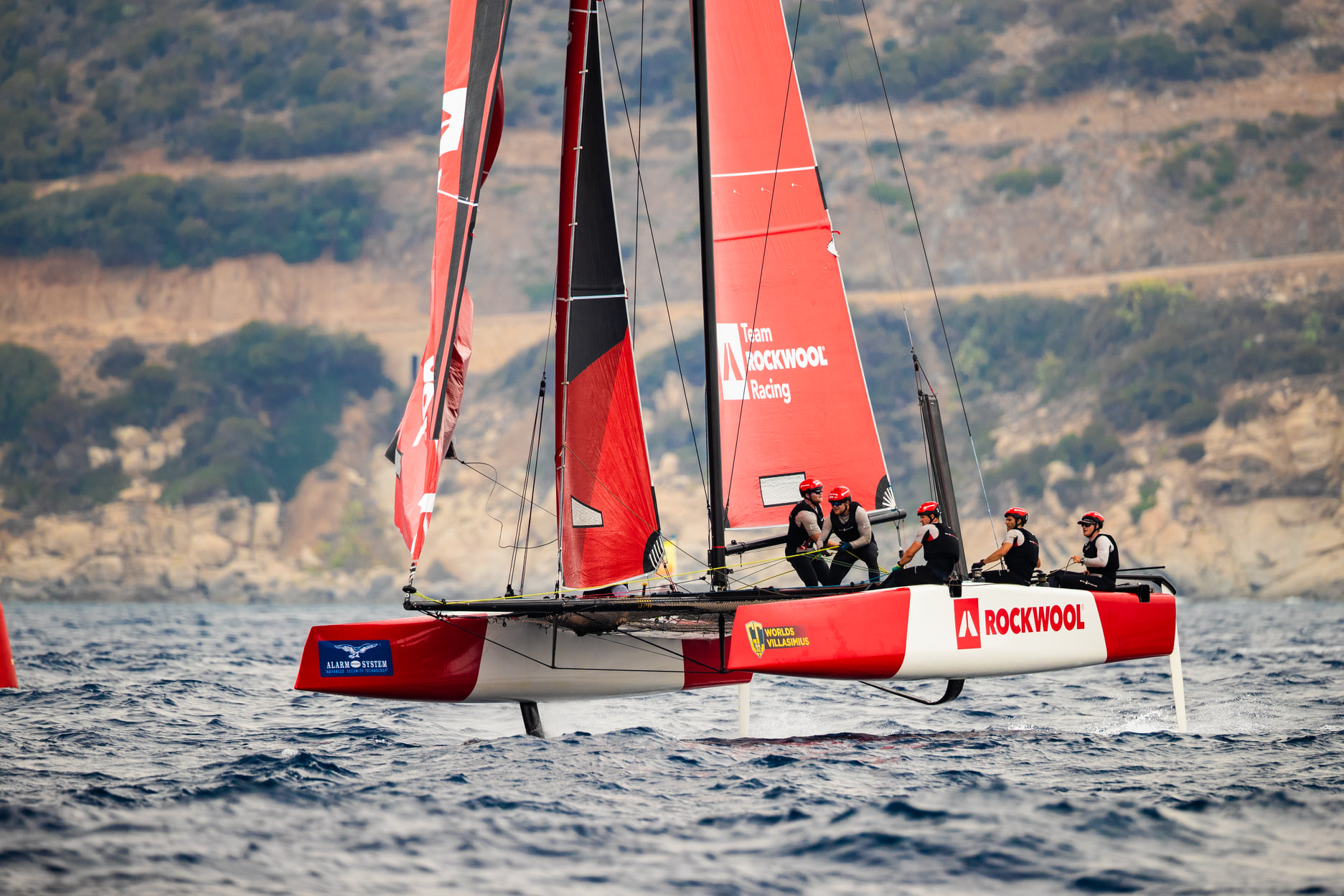 The third GC32 World Championship got off to a difficult start today off Villasimius, Sardinia.

One race was successfully held on the magnificent bay off Marina di Villasimius and the Capo Carbonara marine reserve before the wind began performing laps of the compass dial.

The GC32 one design is the only ‘boat-sized’ foiling catamaran to be permitted by World Sailing, the governing body of the sport, formally to hold its own World Championship. Since the first championship was held on Lake Garda in 2018, the event has evolved into becoming the high point of the GC32 calendar.

It was therefore with much anticipation, possibly too much anticipation, that when the first start gun was fired on schedule just after 1300 four boats were called over early and had to duck back behind the line to re-start: They were Alinghi, Black Star Sailing Team, Jason Carroll’s Argo and Swiss Foiling Academy.

However while the OCS teams were bunched up by the pin end, their loss was the gain of the remaining teams, especially France’s Erik Maris who led off the start at the opposite end of the line on Zoulou, ahead of Sébastien Schneiter’s Team Tilt.

Maris said, “So many people being OCS, made our life a bit easier. We found ourselves ahead and we managed to stay there…”

A second race was started, but was abandoned when the wind collapsed across the race course. The wind then filled in from the opposing south-westerly direction and another race was started, before, once again, the wind disappeared. The wind eventually stabilised in the south, but wasn’t sufficient to continue racing. After a frustrating wait, PRO Stuart Childerley was obliged to send the fleet home.

At the end of day one of this GC32 World Championship, owner-driver Erik Maris and his Zoulou team, including America’s Cup winner Thierry Fouchier, is leading.  “It was one race, but it feels better than the opposite obviously,” said Maris. “At this stage it doesn’t really mean anything. It is good for our race against Argo for the owner-driver championship.

“It was a tough job for the race committee to set courses today. I hope it will get better for them and we can have some good racing tomorrow.”

While Alinghi, the defending GC32 World Champions did a good job to fight back to fourth in today’s race, in both attempts at race two they were ahead when they were abandoned. “It was a good day for us, not in terms of the results, but the way we sailed,” said helmsman Arnaud Psarofaghis. “We were OCS in the first start, which wasn’t the best way to start the regatta, but then we were really fast and came back on the fleet.

“Then the next two times we were leading by a long way before they were stopped. The boat is fast and the team sailed well, so we can look forward to tomorrow and the rest of the week.”

While more races would have been preferable on this opening day, the race committee did all it could under difficult circumstances. As Black Star Sailing Team’s Christian Zuerrer put it: “It was tricky conditions for everybody. Unfortunately the breeze was not stable enough to do more races. The race committee did a great job – they tried hard, but unfortunately they were not lucky.”