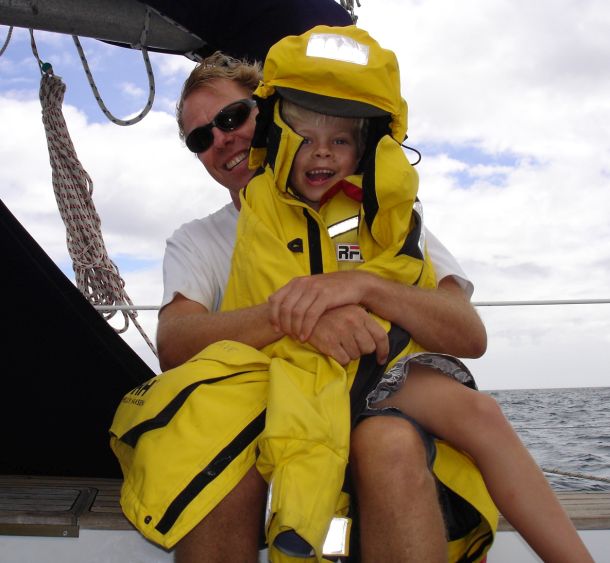 A young Zack and dad David. Photo courtesy of the Austin family.

In just over a week the bulk of the fleet readying for the ninth annual Brisbane to Keppel Tropical Yacht Race will be finalised by the Royal Queensland Yacht Squadron.

Being a Category 2 event means under 18s are allowed and Rockhampton teenager Zack Austin is set to line up for his first ocean race at 1100hrs the day he turns 15, on Thursday July 30. Kiwi born father and son team of David and Zack are joining the crew of Peter Kruger’s Archambault 40 called Broadsword, racing for the host club.

“It’s an opportunity for Zach’s first offshore race with some experienced sailors around him,” David said. “He went on a boat at five weeks of age and has sailed up and down the NZ coast on the family’s 38 foot cruiser racer but hasn’t done any ocean passages yet.”

“I’m a bit nervous but I think it will be really cool doing it with dad and people we know from home,” said Zack, a grade 10 student at Rockhampton Grammar.  “Mum thinks it will be a great experience for me.”

Some of David’s NZ sailing buddies are joining him and Peter Kruger, his best mate.

The 343nm Club Marine Brisbane to Keppel Race runs during the school term which means there’s little time for training in the pre-start. Zach will be stepping on Broadsword on race day morning and heading out of Moreton Bay that afternoon, a very different kind of birthday celebration. “I’ll only miss three days of school so it’s not too bad,” Zach adds.

RQYS staff have had a busy week winding up Queensland Youth Week and moving straight into Sail Brisbane. From next week it’s back to planning for the club’s signature offshore event and last major event of a busy winter that included the bi-annual Brisbane to Noumea race conducted late June.

A wide-ranging line-up of production boats, modified one designs, performance cruising and all-out racing yachts of varying ages and pedigree are taking on the coastal race – 24 so far and 30 plus likely. Most are making their way up the coast to challenge all or parts of the northern regatta series at Airlie Beach, Hamilton Island and Magnetic Island that runs through August to early September.

It makes sense that the majority of the entries hail from Queensland. Sam Haynes’ TP52 Celestial, Tony Kirby’s Ker 46 Patrice, Bruce Foye’s Rogers 46 The Goat and the Tobin brothers’ modified Farr 40 After Midnight are in the mix for New South Wales. Hartbreaker, the former Shamrock now owned by Alan Breidahl, is flying the flag for Victoria and the Royal Brighton Yacht Club.

The interstate contenders and Broadsword lack the waterline length to be considered line honours chances; instead they’ll contest the coveted handicap trophy chase across a number of divisions.

The fastest course time to beat is 24 hours, 22 minutes and 20 seconds set in 2011 by Bob Oatley’s Wild Oats XI. The supermaxi is on the other side of the world about to start the Transpac race from Los Angeles to Hawaii, clearing the way for the largest in the Brisbane to Keppel fleet, Peter Harburg’s powerful Yuan K 70 Black Jack.

Plans are well under way for the Finish Line Festival at Keppel Bay Marina.  The entertainment line-up includes Rhonda Janes on Saturday night and Ryan Conway to follow on after the official presentation on Sunday, and of course the famous Banana Station Beef will be on the menu in the beer garden.

For the second time in the coastal classic’s history RQYS has relaxed the requirement for every yacht to carry an HF radio, shaving thousands of dollars off the cost of mandatory safety gear. Competitors have the option of HF or using a Satellite phone. See the Notice of Race for details.

Next year marks the event’s 10 year birthday and the club and their finish partners at Keppel Bay Marina are looking forward to hosting a record fleet to mark the important occasion.

Online entry is open until Friday July 17, 2015. Entry after the cut-off date will be at the race committee’s discretion.