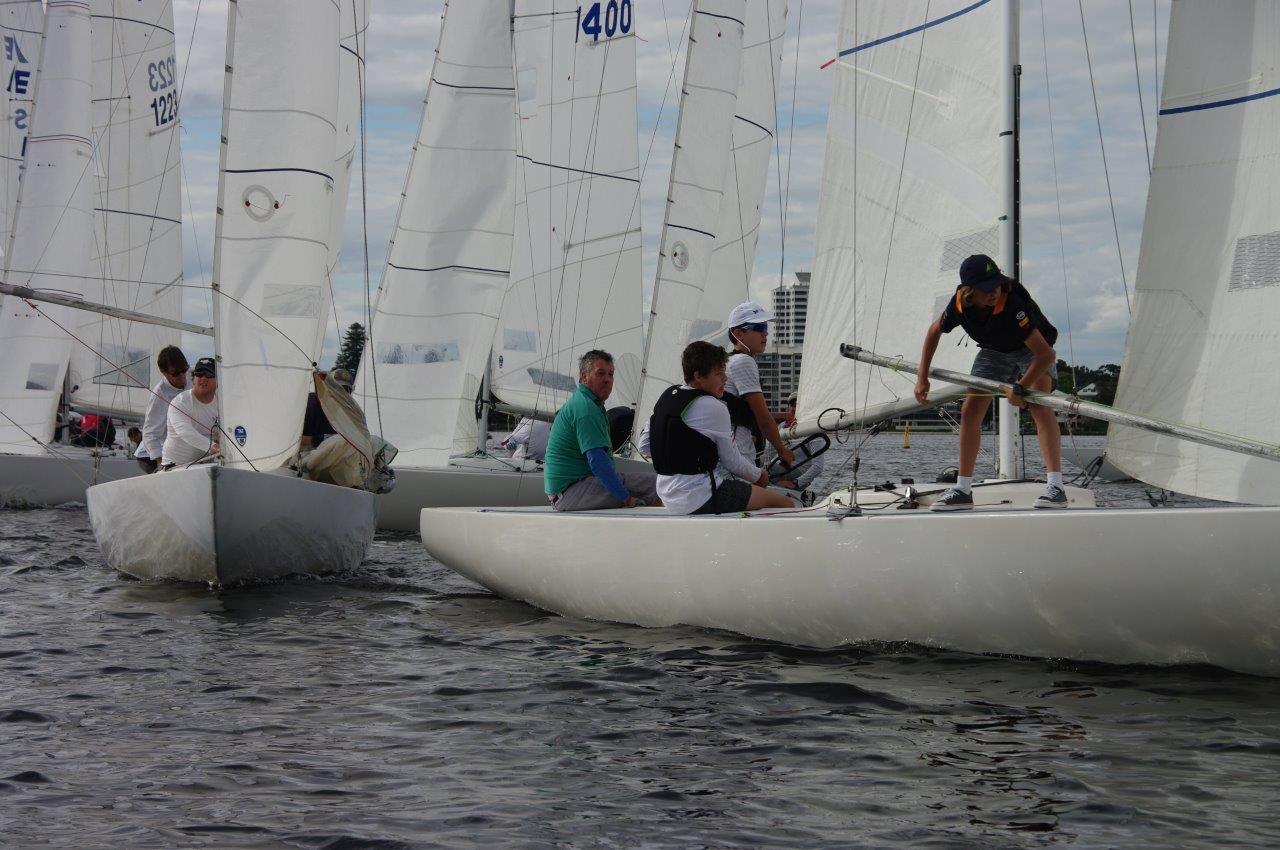 Royal Freshwater Bay Yacht Club in Western Australia hosted a great day out for the Etchells Class. Thirty young sailors from the RFBYC Sailing Institute were invited to participate in a regatta with the Swan River Etchells Fleet last weekend.

This was a fantastic opportunity to connect the youth sailors with the class to try out the boats, learn new skills and have lots of fun. Ten boats were selected to take part with an owner or experienced Etchells sailors on each one plus three new comers.

After some free sailing time in Freshwater Bay to learn the ropes, three races were held. Conditions were perfect with light winds and flat water. There was enough breeze to enjoy the racing but not enough to cause havoc. Not that it would have been an issue, the young sailors certainly showed some talent.

There was a good mix of ages and experience. Junior dinghy sailors Christophe Gardner, Dominic Beer and Joshua Criddle rotated turns on the helm. They have been sailing with their coach Mark Lovelady in the Frostbite series through winter and got on-board the Etchells with him showing they were not at all hesitant about handling the much bigger yacht. The three youngsters had very determined looks on their faces rounding the first mark in first place at one stage, showing their older peers they were up for the challenge.

At the other end of the scale with experience in the Etchells class, Sam Gilmour and Adam Negri were fresh from the WMRT circuit. They handled the boat very well and enjoyed the day getting to know the Etchells group. New match racing talent from the RFBYC Sailing Institute, Jet Racing, were very keen to be involved and have already put their youth nomination in to win use of an Etchells this summer.

“The event was a huge success with all Etchells owners and volunteers enjoying a fantastic day. It was a great opportunity for exchange of learning between the generations with the young guns showing a few owners a couple of new tricks and vice versa.”

He continues, “The kids experienced the thrill of the tactics and strategy involved in competing in WA’s toughest one design keel boat class. Many a conversation was had about how sailing a one design Etchells in a fleet of 25 or more adds so much to the ability to perform in large dingy fleets such like the 9ers and 420’s. I was pleased to see the smiles on everyone’s faces all day and the enjoyable chat by all after the days racing.”

With the Swan River Etchells Fleet hosting the 2018 nationals in Fremantle this January, many of the RFBYC Sailing Institute members have already secured places on Etchells teams for the event.

The Swan River Etchells Fleet reiterates its open invitation for the Royal Freshwater Bay Yacht Club and Royal Perth Yacht Club women and youth to reach out and get involved and is doing everything possible to make participation as easy and exciting as possible. They invite interested sailors to get in touch for information on how to get on-board an Etchells for a race, a regatta or the whole season. There are a number of boats available for charter or sale.

A reminder from the fleet to women and youth teams that the free Etchells for a season competition closes at the end of September, see Facebook @swanriveretchells for more details or the class website etchellsswanriver.org.au