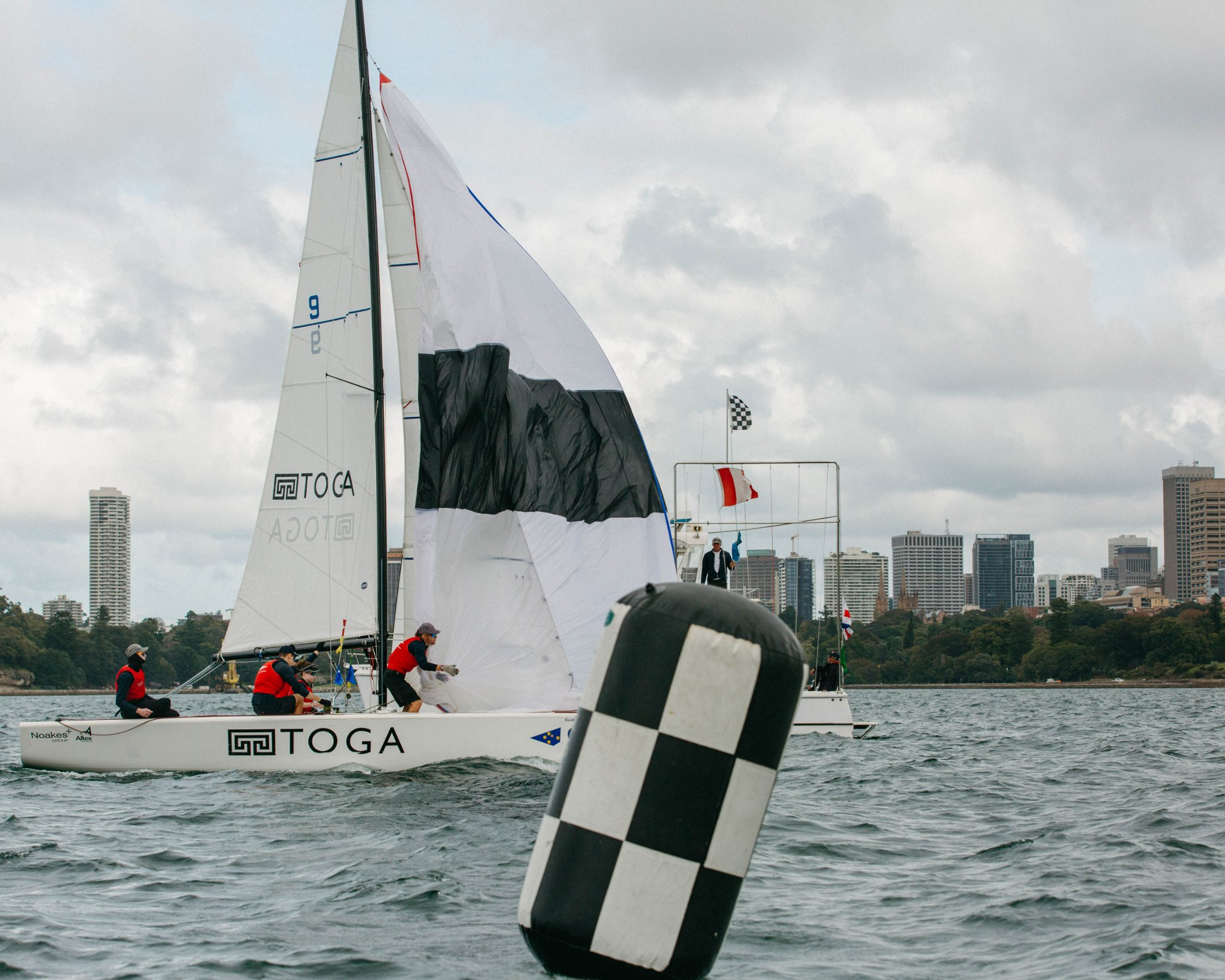 Despite the “super shifty” northeasterly winds and occasional downpours on the penultimate day of Royal Sydney Yacht Squadron’s Hardy Cup Match Racing Regatta on Sydney Harbour, the teams and the umpires, led by Chief Umpire Damien Boldyrew, still came to shore with grins on their faces, pleased that top tier international youth match racing regattas are back on the agenda.

The eight youth teams representing a range of clubs from NSW and New Zealand have fought it out in the Elliott 7s in the qualifying rounds for the past three days. Once these were completed, the semi-finals started in order to get in as much racing as possible before the wind is set to ease today.

The Cruising Yacht of Australia (CYCA’s) Finn Tapper, 22, with crew Will Sargent, Cole Tapper, Jess Tavener and Ryan Ewings, hopes to take home the cup (for the World Sailing Grade 3 event for under 23-year-old teams) for the second year running. The team is on the right track: on Thursday they won the first out of five flights against fellow CYCA sailor Jack Littlechild in the semi-finals. But the conditions didn’t make for easy racing, with wind gusts reaching 20-plus knots at times.

“The racing was super difficult, super shifty, pretty biased left-hand of the track. If you didn’t end up on the left [upwind], you were kind of in trouble,” Tapper said of Thursday’s conditions.

If he defeats Littlechild today, Tapper’s team will progress into the finals against either RSYS’s Max Paul or from all the way from across the ditch, Royal New Zealand Yacht Squadron’s (RNZYS) Robbie McCutcheon.

“It’s been awesome to have the Kiwis back, both those teams [from New Zealand] have been really strong this week. Part of youth match racing is meeting people from other countries from around the world and going to different events and making friends with those people. That hasn’t happened for two years, so it’s been awesome to do that this week,” Tapper said.

The Hardy Cup is the first of several international match racing regattas to come for Tapper. Next week he heads to Auckland to compete in the Harken Youth International Match Racing Cup (May 18-22), and in July he’s off to France for the Youth Match Racing World Championship (July 17-23), with the top prize in his sight.

But first things first, today’s goal for Tapper: “We just want to get through, through the semis, into the final and hopefully do our best to try and win the event.”

RSYS’s Garth Bickford, 19, will also be out on the water today, fighting it out for seventh and eighth place against Royal Prince Alfred Yacht Club’s (RPAYC) D’Arcy Kemp. In his first international match racing regatta as skipper, Bickford is off to a strong start, with one win under his belt already in the best of three round robin.

Bickford was supposed to be on mainsheet trim for this event, but unforeseen circumstances saw him dive headfirst into the deep end as skipper when two crew members had to pull out because of Covid-19.

It’s a relatively new team, with 15-year-old Isobel Payne stepping into the role of mainsheet trim. She had only been on an Elliott 7 a handful of times prior to this regatta. But that hasn’t stopped the team from going out all guns blazing, beating the top RSYS boat skippered by Max Paul in a race yesterday.

“Fortunately, we’ve got a really good team on our boat. And to be able to get two completely new members on the team and for me to jump into a position I’ve never really done before, I’m quite happy. The boat’s going fast, it’s nice,” Bickford said.

Bickford will be back on the mainsheet for next week’s Harken Youth International Match Racing Cup in Auckland.

In the meantime, he’s looking forward to finishing off what’s been a successful week of sailing for the match racing rookie, on a high note.

“My crew is pretty knackered,” Bickford said. “So [the plan is] to just get out there and sail well, don’t slip up in the pre-start and just get the job done.”